Click through all of our Mexican Alligator Lizard images in the gallery. 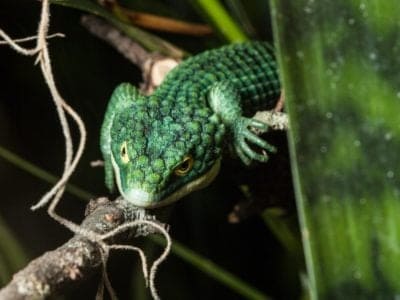 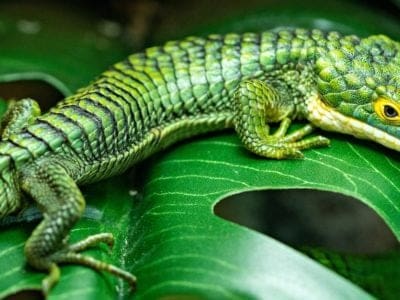 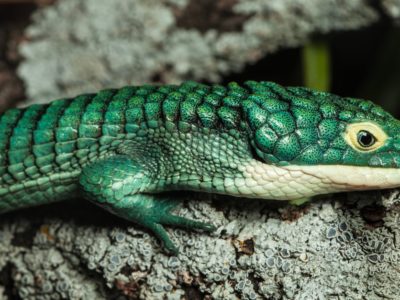 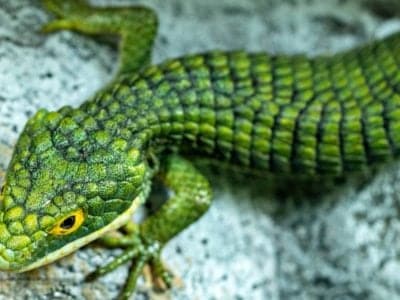 View all of the Mexican Alligator Lizard images!

The Mexican alligator lizard lives about 130 feet in the air in Mexico’s cloud forests.

This bright green lizard is listed as endangered as man destroys its habitat for agricultural purposes. There has been very little study of this lizard in the wild, but it lives for about 10 years in captivity.

There are 67 species of alligator lizards in the world. Eight of them live in North America.

Adult lizards are a vibrant green. Their color is similar to the color of leaves in the spring. They have a bright yellow circle around their eyes.

The facts are that the male is much more colorful than the female, who is a much deeper color, and the circle around the eye is much more subtle.

Juvenile lizards are born a tannish color with subtle black dots. This coloring provides camouflage so that predators do not as easily spot them.

Each has very defined scales, adding to its beauty. The scales usually are a green color with some black lines and dots in them.

When kept in captivity, many of these lizards lose their vibrant green colors. Instead, they turn teal colors. Scientists are not sure why they change colors, but they think this is because of the difference in light. They need the sun to remain its original color.

All of these endangered lizards have triangular-shaped heads. The head has very sharp teeth, which helps them eat hard-shelled insects. They also have a long tail that can be up to 50% as long as their body. If they get into trouble, they can release their tail to get away from danger or predators.

These alligator lizards have short legs with long claws. They can use their sharp claws to hold on better in the trees where they live.

These lizards live in trees in cloud forests. They spend most of their day among tropical plants. The Mexican alligator lizard prefers to live near bromeliads because the cup-like leaves capture water for these lizards to drink.

They are most active during the day and sleep at night. These alligator lizards spend a lot of their time catching insects to eat.

These lizards live in trees in Mexico’s cloud forest. A very few are also found in Guatemala. They prefer to live about 130 feet above the ground.

The cloud forests of Mexico are shrinking as more land is converted for agricultural purposes. These areas contain young trees that tie together areas of old-growth forest.

If you choose to raise these alligator lizards in captivity, you need to provide for their needs. They need to be in a terrarium with lots of humidity. Be sure that they have light during the day and darkness at night. You need to provide lots of places for them to climb and hide. They can withstand temperatures as low as 40 degrees Fahrenheit.

These lizards eat insects. They are opportunistic eaters in that they eat whatever insects are available. Sharp teeth allow them to crack the shells of even the toughest insect.

If you keep one of these lizards in captivity, feed them three to four crickets, moths, wax worms, small cockroaches, hornworms, mealworms, stick insects, or flies per lizard weekly.

Females usually become sexually mature during their third year. These lizards give birth to one to 12 juveniles.

Usually, breeding occurs in the late summer or early fall. Then, the babies are born from late April to late July. In captivity, females will stop eating for about a month before giving birth, but few studies have been done on their mating and breeding behaviors in their native habitat. Scientists know that other species of alligator lizards do not practice elaborate mating rituals. Instead, males seek out females interested in breeding, and the sexual act occurs.

The IUCN lists the lizard on their endangered species list. They say that the population is decreasing. No one knows for sure exactly how many are left in the wild.

Intermediate and expert lizard raisers often enjoy raising Mexican alligator lizards. Be aware that these lizards can be aggressive. While not venomous, they can bite and remove pieces of your skin if you are bitten. Staff working with these lizards in zoos say that the bites are some of the most painful they experience.

If you are thinking of getting one as a pet, consider those bred in captivity. You may want to think again because this lizard bites. Besides the bites, the population in the wild is decreasing. Poachers often pay children $1 or $2 to capture the animals. Then, they are snuck across the border into the United States.

Can You Buy a Mexican Alligator Lizard?

Yes, you can buy a Mexican alligator lizard. A male and female pair costs about $350. Make sure you are dealing with a reputable breeder who only sells lizards raised in captivity. Before getting one, think about the care that they need. Part of that care is to create a humid terrarium with many hiding spots where they can live. Another aspect of their care is being prepared to feed them insects regularly. Finally, you need to think about how you will provide the right temperature for their care.

How big Does a Mexican Alligator Lizard Get?

Mexican alligator lizards grow to be about 9 inches long. About 33% of this length is their tail.

Why Is the Mexican Alligator Lizard Endangered?

There are at least two reasons why Mexican alligator lizards are endangered. Many are caught and sold to people who smuggle them into the United States as part of illegal pet trading. This is harmful to the environment because it upsets the delicate biosystem and can have long-lasting consequences.

Furthermore, these lizards are endangered by the loss of their habitat. Scientists estimate that each year, the amount of cloud forest in Mexico shrinks by 1.1%. In addition to Mexican alligator lizards, these young forests are essential to pollinators. Upsetting the balance may be the end of many animals, including the Mexican alligator lizard.