iStock.com/savilleization
Share this post on:
More Great Content:
Discover the 10 Largest Dolphins in the…
Dolphin Teeth: Everything You Need to Know
Dolphin Lifespan: How Long Do Dolphins Live?
Why Do Dolphins Follow Boats?
Baby Dolphin: 5 Calf Pictures & 5…
Are Dolphins Dangerous?

Ask anyone about the type of food that a dolphin eats, and you’ll probably get the same answer – fish! After all, fish are in high abundance in all of the different waters that dolphins live in. However, these creatures tend to be quite flexible in the foods that they consume, taking advantage of what’s around them. Fish is often their preferred food, but they’ll also consume seaweed, shellfish, other invertebrates, or even rocks. While this resourceful nature works well for many species, it also puts them at risk for consuming plastic and other debris that collects in the water. Read on to learn more about what dolphins eat.

Dolphins are carnivores that feed mostly on fish but will also eat squids, crustaceans, and jellyfish. Some larger species of dolphins will even feed on marine mammals such as seals and sharks!

For most dolphins, the vast majority of their prey are fish. Studies of bottlenose dolphins found that 98% of their prey volume was fish that included eels, hake, and mullet fish. However, the diets of dolphins will vary by habitat and species. For example, the diet of dusky dolphins off the coast of South America eat substantially more anchovies.

While bottlenose dolphins are commonly thought of when people talk about dolphins, there are more than 40 dolphin species in the world! Dolphins that live along coastlines will have vastly different diets than dolphins that live out in the ocean, for example.

One interesting observation scientists have been studying is whether fish traveling in huge schools is an adaptation that helps them hear the clicks from dolphins on the hunt! That is to say, dolphins are such a ravenous eater of fish that they may be causing adaptations in many fish species!

Dolphins have a diet that includes:

How Dolphins Hunt for Prey

Most dolphins locate their food source with echolocation. The clicking noises that they make show them where they can find fish. These mammals will chase and encircle fish to feast upon as a pod, simply opening their mouth to catch it. If the fish is too big to eat whole, they will sometimes break up the fish by slamming it on the water’s surface.

Baby dolphins primarily rely on their mothers for milk. However, as the baby grows, they will consume up to 30 pounds of food a day, working within their family to capture prey. Rarely will you see a baby dolphin hunting for food on their own.

Even with the diet of a carnivore, dolphins aren’t shielded from other predators in their surroundings. Sharks are a significant threat in the ocean, though some species like the tiger, dusky, bull, and great white sharks are the biggest enemies. Sharks will go after adults or calves, though killer whales also hunt other dolphins when the opportunity is there.

Though fish is an obvious choice for dolphins, the specific diet of each dolphin species varies slightly. The dolphin is an opportunistic carnivore, and their main diet will depend on what that particular species is around the most. Let’s take a look at some of the species of dolphins and what food they prefer in their habitat.

Deep-water dolphins, also known as pelagic dolphins, include the rough-toothed dolphin, the Atlantic bottlenose dolphin, and Risso’s dolphins. The climate of these waters gives them constant access to squid and jellyfish, making them essential parts of the dolphin’s diet.

Atlantic bottlenose dolphins, which typically live along the Florida coast, swim to great depths to eat fish like mullet and catfish. Bottlenose dolphins. Dusky dolphins, found in deep waters in the southern hemisphere, prefer a more varied diet than the bottlenose dolphin. In addition to fish, they also seek out shrimp, squid, and anchovies in the ocean waters they live in.

River dolphins have access to freshwater fish in high abundance that dolphins in the ocean do not. Primarily, dolphins like the Indus River dolphin and the Amazon River dolphin tend to consume the freshwater crustaceans and fish in their habitat. The former has a particular love for gobies and carp in their diet.

Spinner dolphins prefer the warm waters of tropical and subtropical climates. They live in the Atlantic, Indian, and Pacific Oceans, giving them plenty of variety to choose from. Fish is a staple of their diet, preferring smaller fish that quickly fill up their stomach. Since they dive to depths of up to 1,000 feet below the surface, they’ll also consume jellyfish, krill, shrimp, and squid.

The killer whale is a part of the dolphin family, and their massive size requires equally massive food intake. While they’ll eat fish like other dolphin family members, their food needs to be at a much grander scale to satisfy their caloric needs. Often, the whale will eat other sea mammals, including dolphins! Other mammals that might be on the menu for the killer whale include seals, sea lions, and other species of whales.

Larger dolphins tend to reside at the top of the food chain, making them apex predators with no other species that hunt them.

What Do Bottlenose Dolphins Eat? 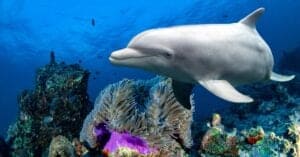