Click through all of our River Turtle images in the gallery. 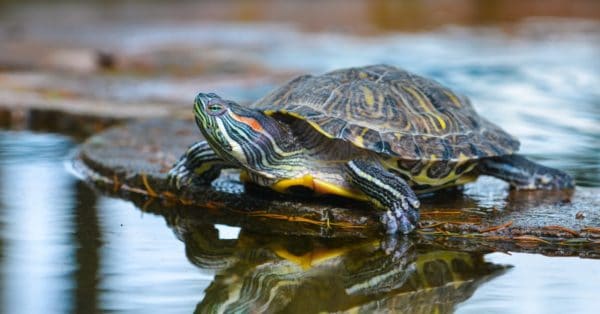 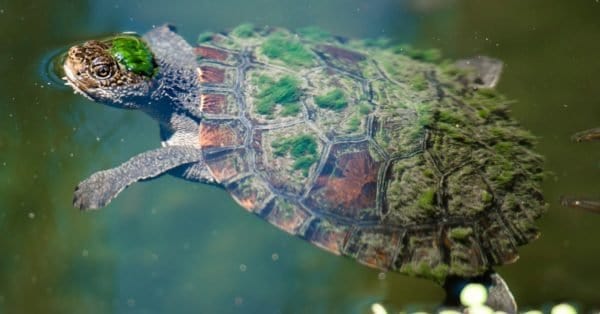 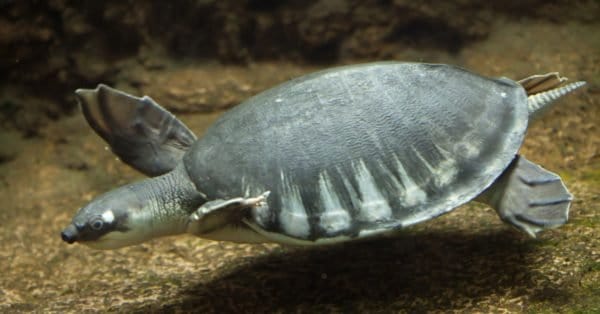 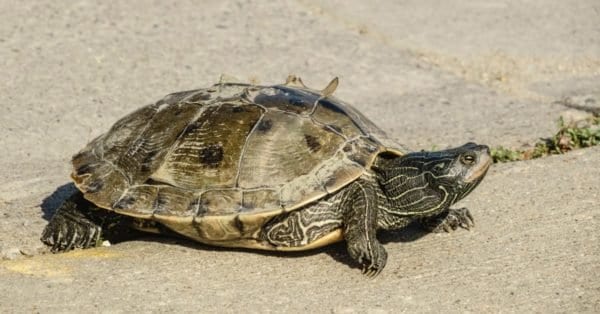 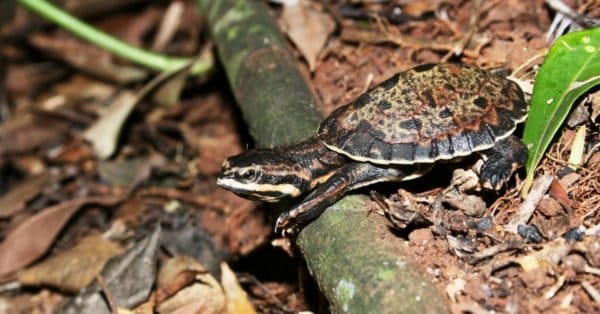 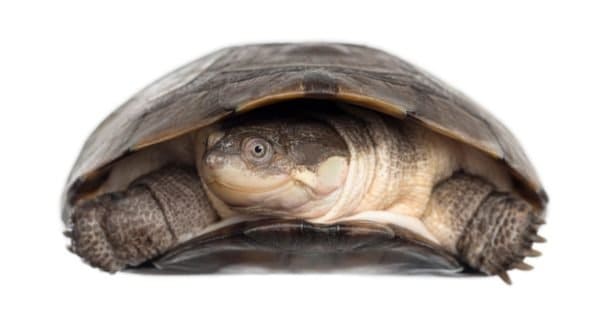 View all of the River Turtle images!

River turtles are turtles that spend most of their lives in or near rivers.

Most species are found in two families, Chelidae and Emydidae, with the latter including more than 50 species across 10 genera. The Mary river turtle, Elusar macrurus, is one of the most interesting examples of this type of turtle. Unfortunately, the species is now classified as Endangered by the IUCN Red List. Like most endangered turtle species, human activity is the Mary river turtle’s primary threat.

Some interesting facts about river turtles include:

All of these turtles belong to the class Reptilia and the order Testudines. The Mary river turtle is further subclassified into the family Chelidae and the genus Elusar. Elusar is a monotypic genus, meaning that it consists of only one species. The genus is one that has virtually disappeared from the evolutionary history of Australia and has an ancient lineage. The scientific name of the Mary river turtle is Elusar macrurus. Other names for this species include the green-haired turtle, the penny turtle and the pet shop turtle.

Several other turtle species belong to the family Emydidae, which spans 10 genera and more than 50 species. River turtles belonging to this family include terrapins, marsh turtles, and pond turtles. All species are found in the Western Hemisphere.

Still, other species belong to the family Podocnemididae and the genus Podocnemis. The yellow-spotted turtle, Podocnemis unifilis, is a good example of a turtle from this family. Species within this family are generally native to the Amazon River basin.

The Mary river turtle, E. macrurus, is the second-largest freshwater turtle in Australia. Only the western swamp turtle, Pseudemydora umbrina is larger. The carapace, or upper shell, of this species, can grow up to a length of 20 inches, and this type of turtle has an average weight of about 8 grams. The carapace of the Mary river turtle has a streamlined, elongated appearance and may be plain or covered in intricate patterns.

In terms of coloring, the carapace of this species is typically brown, rusty red, or almost black. The lower shell, or plastron, is generally pale pink or cream and the underlying skin is usually the same color as the carapace. This turtle’s limbs and tail are usually salmon pink in color. Its tail, which can be up to two-thirds the length of the carapace, has haemal arches – a feature that is not found on any other modern turtle. The purpose of these bony arches is unclear. Long barbels – slender, whisker-like sensory organs – are located beneath the jaw.

Species like the yellow-spotted turtle, P. unifilis, attain a length of up to 18 inches and an average weight of just 0.3 ounces. Members of the Emydidae family typically have large plastrons and carapaces that are shaped like low arches. Some species have a movable hinge between the pectoral and abdominal sections.

The limbs of all these turtles are adapted for swimming, with webbing at the extremities.

Some sexual dimorphism is evident across most types of these turtles. In particular, males tend to be significantly larger than females. Other facts regarding dimorphism among these turtles may include differences in plastron shape and tail length.

Like most turtles, these turtles are mostly solitary. They only tend to get together during mating season, and females often gather at the same time to lay their eggs.

The Mary river turtle and other types of turtles engage in bimodal respiration. When above the water, they breathe and take in air using their lungs. When submerged – which they may be for a few days at a time – they can also absorb oxygen through their cloaca. Their tails contain gill-like structures, allowing them to stay submerged for up to 2.5 days. As a result, certain river turtles are called “bum breathers.” Technically speaking, they are known as cloacal ventilators, meaning that they can breathe oxygen out of their anuses.

Highly aquatic, these turtles have webbed feet and spend much of their time submerged in the water. They are fairly fast swimmers, averaging a top speed of about 2.4 miles per hour. Unlike many turtles, which withdraw their heads directly down into their shells, species like the Mary river turtle withdraw their heads sideways into their shells. Like all reptiles, these turtles are ectothermic, or cold-blooded, and they spend many hours each day basking in the sun to increase their body temperatures.

These turtles typically inhabit freely flowing, well-oxygenated sections of rivers. Most of these turtles use terrestrial nesting sites within a short distance of such rivers. They tend to be particularly fond of pools and riffle zones. They typically need adequate foraging areas, nesting areas – usually open areas along riverbanks –basking sites, and nocturnal resting areas.

Members of the Emydidae family, which includes more than 50 species, are strictly found in the Western Hemisphere, and their range is extensive and varies significantly. The yellow-spotted turtle and several other species are native to the Amazon River basin.

One of the most unique turtles, the Mary river turtle, has a range that is strictly limited to the Mary River in southeast Queensland, Australia.

In terms of diet, turtles like the Mary river turtle are overwhelmingly herbivores, which means that the food they eat mostly consists of vegetation. Most species subsist primarily off of algae and other types of plant matter. However, they can also be molluscivorous, meaning that they feed on mollusks and other bivalves. Some species may even occasionally prey on small animals for food. Therefore, these turtles are sometimes opportunistic feeders. When preying on animals, turtles like the Mary river turtle hover low against the bottom of the river, where they become camouflaged. They wait patiently for small fish, mollusks, and other prey to come along and then consume them if the opportunity arises.

Like most turtles, mature turtles don’t have many natural predators since they can hide themselves away within their shells when threatened. These turtles also move quickly in the water, so they can flee from attackers fairly easily. The turtles’ eggs and hatchlings are much more susceptible to predation, and such activity can have negative impacts on local population numbers. Animals like snakes, foxes, birds, and even wild pigs actively hunt for and consume these turtle eggs.

Many of these turtles are endangered to some extent. The Mary river turtle, the second most endangered freshwater turtle in Australia, is a good example of this problem. In 2003, the Turtle Conservation Fund included the Mary river turtle on its list of the Top 25 Most Endangered Turtle Species. The species is listed as endangered under the Queensland Nature Conservation Act of 1992 and under the federal Environmental Protection and Biodiversity Conservation Act 1999. It is also classified as Endangered on the IUCN Red List. Only the western swamp turtle is considered at greater risk of extinction.

Human activity is the primary threat to most of these turtles. During the 1960s and 1970s, for example, the Mary river turtle became a popular pet across Australia; roughly 15,000 of the turtles were delivered to pet shops around the country per year over a 10-year period. Since they were sold as juveniles, they were known as penny turtles. They were also called pet shop turtles.

Like other turtles, these turtle habitats are often under threat. The Mary River, for example, first became impacted by human activity during the gold rush of the 1860s. Huge volumes of gravel and sand were excavated from the river for building materials, and large wood materials became depleted. These turtles rely on such materials, so this activity has had a negative impact on their survival. Some species may also be consumed for food by humans.

Various laws and regulations protect many species of these turtles. Efforts to increase their populations have been underway for some time. The Australian Freshwater Turtle Conservation and Research Association, for example, first started breeding Mary river turtles in captivity in 2007.

Since these turtles span so many species, there is no single, definitive average lifespan. However, most species live for an average of 30 years. It is believed that the Mary river turtle may live upwards of 100 years in the wild.

These turtles typically begin nesting after the spring rains into the summer months. Mary river turtles produce one clutch with an average of 15 eggs per year. Females lay eggs on open expanses along riverbanks, burying them in the sand, and they hatch within 50 to 79 days. Hatchlings peck their way out, climb to the surface and begin their lives. Adult turtles do not provide any care to the eggs or hatchlings, which is typical among turtles.

Most of these turtles have solid populations, but some – including the Mary river turtle – are endangered. Population estimates for river turtles around the world are not available.

River Turtles in the Zoo

Examples of these turtle species can be found in zoos around the world. The Australia Zoo in Sydney has examples of the Mary river turtle, one of the most endangered freshwater turtles in the country.

View all 24 animals that start with R

Most river turtle species are primarily herbivores. Since they occasionally consume mollusks and small fish, however, they may be considered omnivores.

What Kingdom do River Turtles belong to?

What class do River Turtles belong to?

What phylum to River Turtles belong to?

What family do River Turtles belong to?

What order do River Turtles belong to?

What type of covering do River Turtles have?

River Turtles are covered in shells.

In what type of habitat do River Turtles live?

What is the main prey for River Turtles?

What are some predators of River Turtles?

Predators of River Turtles include foxes, dogs, and humans.

How many babies do River Turtles have?

The average number of babies a River Turtle has is 35.

What is an interesting fact about River Turtles?

What is the lifespan of a River Turtle?

How fast is a River Turtle?

A River Turtle can travel at speeds of up to 2.4 miles per hour.

How big do river turtles get?

The average lifespan of this species is unclear. However, it is believed to live for 100 years or longer. They are also among the largest turtles found in Australia.

Where are river turtles found?

River turtles are mostly found in the Western Hemisphere. They are found along well-oxygenated, fast-moving stretches of river. Some types have fairly extensive ranges. Others are only found in limited geographical areas. The Mary river turtle, for instance, is only found along the Mary River in southeast Queensland, Australia.

What do river turtles eat?

Most river turtles primarily subsist off of algae and other plant materials. They may occasionally consume mollusks and small fish too.

How many species of river turtle are there?

There are at least 50 different species of river turtles.