These snakes give birth to live, nine-inch offspring, rather than laying eggs. 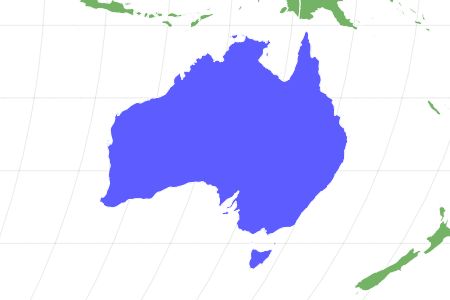 View all of our Red-Bellied Black Snake pictures in the gallery.

View all of the Red-Bellied Black Snake images!

The bite of these snakes is toxic, but they are not considered an aggressive species. This lack of aggressive behavior is good because they are one of the most common snakes met by humans in the east part of Australia. Despite their shy nature, they still bite about three dozen people annually, though none of their victims has ever died.

Where To Find Red-bellied Black Snakes

These snakes are indigenous to the east coast of Australia , including Victoria, New South Wales and Queensland. They are semi-aquatic and often live near bodies of water. They can be found in or near woodlands, grasslands, forests, swamps and other wetlands, streams and shallow rivers. They prefer tall, thick vegetation to hide in, but they are cold-blooded, so they also like areas with patches of direct sunlight. They are sometimes found near drainage ditches.

The scientific name for the red-bellied black snake is Pseudechis porphyriacus . This scientific name means “red-purple false viper” in Latin and Greek. This snake was first described in 1794 and has had several scientific names during that time before receiving its current one. Originally it was known as Coluber porphyriacus because it was incorrectly believed to be non-venomous. The red-bellied black snake has at various times been called Trimeresurus leptocephalus, Naja porphyrica, Acanthophis tortor, and Trimeresurus porphyreus , as well as a couple of misspellings of its current name. These snakes are also known as the common black snake, red-belly, RBBS, and several indigenous names.

These snakes are listed as being of Least Concern (LC) by the ICUN. Since they can give birth to 18 live babies at a time, and live in so many different habitats, they are not at high risk of decreased population at this time. The nine inch size of the babies is an advantage too. Since they live on a varied diet of lizards, fish, frogs, and other snakes, their food sources are also plentiful. They can also hunt in or out of water. The red-bellied black snake’s main threat is from the cane toad, whose venom is toxic to red-bellied black snakes.

A red-bellied black snake’s size is distinctive, reaching between four and a half to six feet in length. The top part of its body is a shiny solid black, while the underbelly is several shades of red. The head of this snake transitions seamlessly into its body, with no distinguishable neck. They are very similar in appearance to a blue-bellied black snake, save for the belly color.

Red-Bellied Black Snake Venom: How Dangerous Are They?

The venom from a red-bellied black snake bite can cause a lot of issues, though no human is ever known to have died from one of their bites. The venom keeps blood from clotting, so the bites bleed a lot. In addition to redness and swelling, the venom can cause nausea, vomiting, diarrhea, muscle pain, sweating, weakness, headache, urine discoloration and abdominal pain. They are not aggressive, which also makes them less dangerous, since bite numbers versus human interactions are low.

Every year, about 35 people are bitten by these snakes. Because this snake is so common throughout eastern Australia , and is so frequently encountered by humans, that is actually a very low number. Red-bellied black snakes are shy and in most cases they would rather slither away than attack a human. The exceptions to this would be when a female red-bellied black snake is pregnant and therefore protecting her unborn babies, or when they are simply cornered so there is nowhere to escape. A human might also come upon one of these snakes unaware in the water and receive a strike, but overall, they are not an aggressive species and their venom is not as toxic as that of other elapid species, so they don’t pose a huge threat to people.

Is a red-bellied black snake poisonous?

A red-bellied black snake is not poisonous, but it is venomous.

The top part of its body is a shiny solid black, while the underbelly is several shades of red

How venomous are red-bellied black snakes?

The venom of a red-bellied black snake is quite toxic to humans, though bites are relatively uncommon with fewer than three dozen per year, but there are no recorded deaths as a result of the venom from their bite.

Where do red-bellied black snakes live?

Red-bellied black snakes are found in the swamps, wetlands, woodlands and grasslands of the east coast of Australia .

Why is it called a red-bellied black snake?

It is called a red-bellied black snake because the snake is primarily black, with a red underbelly.