One of three giant catfish species 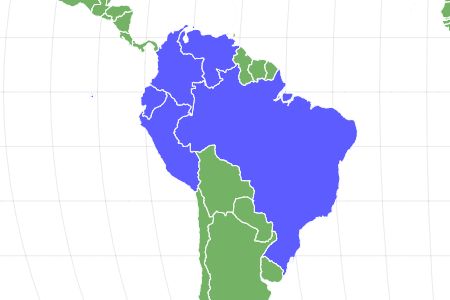 View all of our Redtail Catfish pictures in the gallery.

View all of the Redtail Catfish images!

The redtail catfish is a large, colorful fish that is native to the Amazon and Orinoco river basins of South America.

It only lives in freshwater streams and rivers. Distinctive for its bright red fins and enormous size, this attractive fish is a popular exhibit in aquariums.

4 Amazing Facts About the Redtail Catfish

The fish’s scientific name is Phractocephalus hemioliopterus. In Venezuela, it is known as the cajaro. In Brazil, it is called the pirarara. It is the only extant species of the genus Phractocephalus.

The Redtail Catfish is one of the three giant species of catfish in the Amazon. The other two are the piraiba and the jau.

This fish is a pimelodid or long-whiskered catfish. It is a large fish that can grow almost 6 feet long and have a top weight of 180 pounds. Most redtail catfish, however, do not get this big. They are usually 3 to 4 feet long.

Unusual for a catfish, the redtail is very colorful. It has a brown-spotted back and yellow sides. The fish often has dark gray scales with a bold, darker pattern on each side. Its most distinctive features are its bright red dorsal fin and the red caudal fin that gives this fish its name. It usually has a black body and a white belly. It has a wide, flat head with long whiskers.

Its fighting spirit and bright, unusual colors make it one of the most exotic-looking river fish.

The redtail catfish is native to the Amazon, Orinoco, and Essequibo River basins of South America. It lives in freshwater streams in Ecuador, Brazil, Colombia, Peru, and Venezuela.

Redtail catfish are considered the most attractive catfish, and they are popular in aquarium exhibits. Some places where you can see them are:

There is also an Asian redtail catfish that is native to Thailand.

The redtail catfish’s chief predators are humans, who regularly hunt it as a game fish. It is a large, aggressive fish that usually dominates its environment.

Unlike other catfish species, the redtail does not cling to the bottom and wait for prey to approach. It is an active, energetic predator that is known to have a voracious appetite. Red-tailed catfish are territorial fish that defend their hunting grounds aggressively. They are good fighters who will attack other fish trying to move in on their chosen area.

During the day, it is almost motionless. At night, it goes in search of prey.

What does the redtail catfish eat?

The mating season for most redtail catfish is between May and July. This fish has an unusual mating routine. After bumping into a male, a female catfish opens her mouth to receive the male’s sperm. She then lays the eggs, which she holds in her ventral fins. She deposits the sperm on the eggs and then places the eggs in a hidden nest.

Redtail catfish have a long lifespan. They can live 15 years in captivity, but they live even longer in the wild. Captivity is stressful if they are in a tank that’s too small for them.

Redtail Catfish in Fishing and Cooking

Redtail catfish are a very popular game fish. Many people visit the Amazon region intending to catch these and other large, exotic river fish. They are considered excellent game fish because they put up a fierce battle. Their size and beautiful colors also make them fun for experienced anglers to catch.

These massive fish provide plenty of meat. Natives of the Amazon region, however, don’t eat them because their meat is dark. To develop redtails as a food source, some fisheries have bred them with other species like the Tiger Shovelnose. This pairing produces a hybrid called the Tiger Redtail Catfish that has light-colored meat.

There are many ways to cook catfish. Its low price and good flavor have made it a staple of many cuisines. One of the most popular ways is to flour it, season it, and deep-fry it. It is also a good fish to grill or bake. Catfish meat is dense, tender, and sweet.

The redtail catfish is not on the red list of the International Union for the Conservation of Nature (IUCN). Population numbers are unknown, but the population appears stable.

This catfish is a striking fish with a fighting spirit. It is good to eat and beautiful to look at. If you get a chance to see one in an aquarium, don’t miss the opportunity to see this giant of the Amazon.

Why is it called a redtail catfish?

It is called that because of its bright red dorsal and caudal fins.

Although they are popular among people who like keeping large fish, they are not a good pet for beginner aquarium hobbyists. Although they seem small when you see them in an aquarium store, they grow extremely quickly. They will eat everything in the tank, including decorations and inanimate objects.

Tank size is another consideration. If you want to keep one, you must have a tank of at least 2,600 gallons.

Some people keep the fish while they are young and then donate them to large, public aquariums when they outgrow their tanks. Others buy them to stock their home ponds to avoid the tank size problem.

A redtail catfish is energetic and needs plenty of room to move. These fish have been known to die of stress and boredom when forced to live in tanks that are too small. Because they have big appetites and always seem hungry, overfeeding is one of the most common causes of death in pet redtail catfish.

It’s also important to keep the water temperature and pH at the correct levels. Although these fish are tough, they come from a warm environment and need water temperatures ranging from 68 to 80 degrees Fahrenheit. The pH levels should stay below 7 for the best results. It is extremely difficult to do this regularly for a large tank like the one a redtail catfish needs.

The price of a live redtail catfish for a tank or pond can range from $35 to $60. Because they eat a lot, they produce a lot of waste, so you must stay on top of your water filtering system. Water maintenance, tank size, and the cost of food are all higher with a large, exotic fish like this. You must also choose its tank mates carefully.

What tank mates can live with redtail catfish?

Redtail catfish can share a tank with other large, freshwater fish. Some good tank mates are pacu, arowanas, gar, and other large catfish.

Can you eat redtail catfish?

Yes, you can eat them. Catfish meat is tasty and nutritious, and people often fry, bake, or grill it.

What is a platinum redtail catfish?

It is called that because of its bright red dorsal and caudal fins.

Although it is a catfish, the Asian redtail catfish (Hemibagrus wyckioidesw) is a member of the Bagridae family.

Discover the Largest Flathead Catfish Ever Caught in Florida