Diego Velázquez’s famous 17th century painting of the Infanta and her dwarves includes a portrait of a Spanish Mastiff. 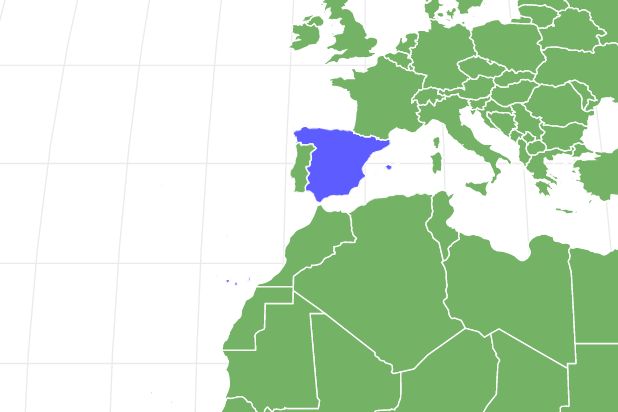 Spanish Mastiff as a Pet:

View all of our Spanish Mastiff pictures in the gallery.

View all of the Spanish Mastiff images!

The history of the Spanish Mastiff goes back 1,100 years to the 10th century when shepherds began using them to defend migrating herds against grey wolves and other predators. Spanish Mastiffs are powerful canines with long legs, heavy bones, and muscular bodies, but they have surprisingly docile temperaments. In their homeland Spain, they are also known as the Mastín Español and Mastín de España. The American Kennel Club classifies these canines as working dogs.

While these dogs are good-natured and exceedingly intelligent, they can be hard to train because they’re firmly convinced that they are the true alphas of any group they’re in, and it can be hard to disabuse them of this notion. For that reason, they don’t make great pets for first-time dog owners. Spanish Mastiffs are Spain’s national dog; approximately 24,000 of them live in their native country, but there aren’t very many of these dogs outside Spain.

Spanish Mastiffs are enormous dogs. Adult males stand 30 to 35 inches tall and weigh anywhere between 160 and 220 pounds. Adult females are significantly smaller; they range in height between 28 and 35 inches, and they weigh between 110 and 170 pounds.

The typical lifespan of these dogs is 10 to 12 years. Obesity can be a significant issue with these canines, particularly if you don’t make a point of implementing a healthy eating routine with your pet while he or she is a puppy. You don’t want to encourage these dogs to beg for table scraps.

Like other large dogs, they are prone to musculoskeletal problems that include hip dysplasia and elbow dysplasia. Immature dogs can also be affected by eosinophilic panosteitis, which is a painful inflammation of the long bones in the legs. If this condition commences, you’ll begin seeing it when your puppy is between six and 10 months old. While eosinophilic panosteitis doesn’t cause permanent damage, it can be extremely painful and cause your dog to walk with a limping gait.

Health and Entertainment for your Spanish Mastiff

Because they drool so much, they are also prone to developing dental disease. If you own this breed, it is absolutely essential to brush your dog’s teeth regularly at home and to bring him or her to the vet for regular teeth cleanings.

These dogs have placid, mellow temperaments. Their personalities are very relaxed so long as they don’t feel like they have to compete for their owner’s attention. Territoriality is a strong behavior trait in them, however. While they can be socialized to share the roost with another dog or even a cat, they prefer not to. They do best as only dogs.

Though loving and loyal, Spanish Mastiffs are independent dogs. They don’t mind spending time by themselves. They’re very intelligent, and this means that if they are not trained well, they may get into mischief if they’re off enjoying time on their own. They naturally assume that they’re the leader of the pack, and it is up to you as the owner to teach them differently.

How To Take Care of Spanish Mastiffs

Because of their huge size, these dogs have some specialized needs when it comes to diet and exercise. Their short, dense double coats require some specific types of attention as well. Here are some tips for the types of care that will keep your dog healthy and happy.

These dogs typically consume four cups of high-quality kibble a day. As big dogs, they have a tendency toward bloat, so it’s safest to divide their feedings up into at least two meals a day. Because they are prone to dental issues, definitely opt for dry dog food as opposed to wet/canned.

Formulated specifically for big dogs, this lamb recipe also has supplemental chicken ingredients delivering natural glucosamine and chondroitin sulfate. Alongside calcium and phosphorus (which also help with dental health), these nutrients are instrumental in developing and maintaining sturdy joints. Since this kibble is protein-rich and includes healthy grains for fiber, it’ll satisfy your dog so it won’t overeat. Also, the crunchy texture and special shape help remove tartar and plaque for healthier teeth and gums. 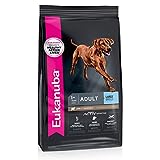 These dogs have a dense, medium-length double coat and are prone to shedding. If you don’t want to add dog hair to your indoor decorating scheme, they need to be brushed vigorously at least twice a week with a pin brush and a metal comb. During the spring and fall, when they shed their coats, you may need to brush them daily.

Their nails are strong and grow quickly, so you’ll need to trim them regularly to prevent overgrowth and splitting. Their long, flat ears need to be checked for mites and cleaned regularly, too. As an excessive drooler, this breed is prone to dental disease, so brushing your dog’s teeth several times a week is highly recommended.

They are very smart dogs, but training can be a challenge, particularly for inexperienced dog owners. These dogs prefer to think for themselves, and they’re very stubborn. You’ll need to begin training and socialization activities early and reinforce that training over the course of their adult lifespan. Socialization is particularly important because its large size means that it can cause damage without intending to. Spanish Mastiffs respond best to positive reinforcement. They’re especially motivated by treats.

Despite their size, Spanish Mastiffs are not high-energy dogs. Left to their own devices, many of them would cheerfully forgo exercise. A responsible Spanish Mastiff owner will not allow this, though. Plan on taking your dog for at least one 45-minute walk a day. Spanish Mastiffs are most active in their young adulthood, so they may need additional exercise during this time.

Spanish Mastiffs retain many of their puppy-like behaviors well into the third year of their lives. They typically have large litters of up to 10 puppies, and since they only weigh one pound at birth, breeders must take particular care to prevent a mother from inadvertently squashing and injuring her pups. It’s extremely important to feed a puppy specially formulated food so that he or she doesn’t grow too fast, which will place excessive strain on their joints.

These dogs love children, and children love Spanish Mastiffs. Problems arise, however, when your dog forgets how big it is and accidentally causes a small child injury. This is one of the reasons why socialization is so important for this breed. Even with a well-socialized Spanish Mastiff, it’s wisest never to leave them unsupervised around children younger than 10 years old.

Have a look at these names for your dog:

How much does a Spanish Mastiff cost to own?

Spanish Mastiff puppies can be difficult to find in the U.S. The price for one, if you can locate a reputable breeder, will set you back $1,200 and $2,000. Many breeders live outside the U.S., so you may have to factor in the costs of transportation and lodging into the price you pay for the dog.

Expenses your first year will include vaccinations, microchipping, spaying or neutering, bedding, food, toys, and training; total costs will range between $1,500 and $2,000. After that, expect costs of approximately $1,500 a year.

Are Spanish Mastiffs good with kids? (a more concise reframing of the section above with children)

Spanish Mastiffs are good with children, but they should never be left alone with children younger than 10 years old.

How long does a Spanish Mastiff live?

The lifespan of a Spanish Mastiff is 10 to 12 years.

Spanish Mastiffs are not particularly aggressive unless they believe their families are under attack. Their sheer size can make them dangerous if the dogs have not been properly socialized and trained, however.

If they are properly trained and socialized, Spanish Mastiffs make excellent family dogs.

How big is a Spanish Mastiff ?

Spanish Mastiffs can grow as tall as 35 inches and weigh as much as 220 pounds.

How much does a Spanish Mastiff cost?

Expect to pay between $1,200 and $2,000 when you buy a Spanish Mastiff puppy from a reputable breeder.