There are only a few left in the wild! 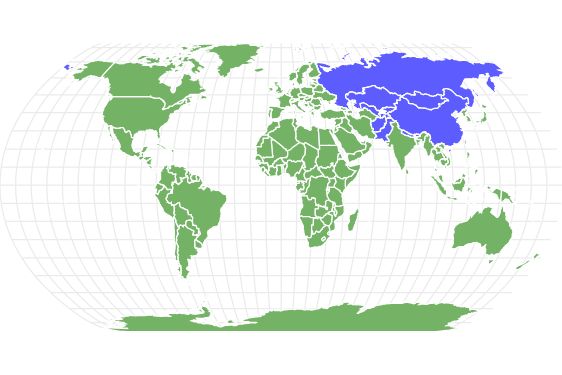 View all of our Yak pictures in the gallery.

View all of the Yak images!

Yaks are heavily built animals with a sturdy frame that have long, thick hair.

Yaks are animals that are native to Tibet and China but are also found in Mongolia, Nepal and Central Asia. Scientists believe that Qiang tribespeople domesticated yaks at least 5,000 years ago, a claim supported by genetic evidence. However, some Tibetan peoples may have possibly domesticated yaks as long as 10,000 years ago. Domestic yaks far outnumber wild ones and are bred for their tractability for plowing and threshing, high milk production, meat, hides and fur.

Yak are members of the bovine family and are related to cows and buffalo, all of which are likely descended from aurochs, an extinct species of cattle. Yaks split from aurochs sometime between one million and five million years ago. Scientists classify the wild (Bos mutus) and domestic yaks (Bos grunniens) as two distinct species. The English word yak derives from the Tibetan word “yag.” The scientific name of both species refers to the sounds or lack thereof that these animals make. Bos mutus, means mute ox, while Bos grunniens means grunting ox. They belong to Bovidae, the same family as the Asian water buffalo, the African buffalo and the American bison. The key difference between the two species is size, with wild males weighing up to two times more than their domestic counterparts. Domestic yaks are descended from the wild species.

All yaks are similar in appearance, although, as previously mentioned, wild yaks are larger. Wild yaks generally have darker, blackish to brown hair, while domestic species have wider color variations that include rusty brown and cream. All have warm, dense fur that hangs below their bellies and a wooly undercoat that covers their chest, flanks, and thighs. They have bulky frames and sturdy legs that end in rounded, cloven hooves. Their firm horns are also used for defense, allowing them to break through the snow in winter to find food buried beneath. Both males and females have a short neck with a pronounced hump over the shoulders, although this characteristic is more pronounced in males. They have tails that are long and look more like those of horses than of cable.

Domesticated yaks are smaller as males generally weigh 600 to 1,100 pounds, while females range from 400 to 600 pounds. Wild males can weigh as much as 2,200 pounds. The height of domestic males varies, but they generally top out at 44 to 54 inches at the withers, while females are 41 to 46 inches at the withers. Females have four teats with an udder that is small and hairy. The same can be said of the male scrotum. The size and hairy coverings are protection against the cold.

Wild yaks live in herds of several hundred animals, comprised primarily of females and their young with only a few males. Most males live on their own or live in smaller bachelor groups of about six until just before mating season when they will typically rejoin the larger herd. They generally avoid humans and may flee, although they can become aggressive when defending young or when in rut when males regularly fight amongst themselves to establish dominance. Typical rut behavior includes non-violent displays, along with attacks such as bellowing and scraping the ground with their horns. Bulls will also repeatedly charge at one another with their heads lowered or will spar with their horns. Males often wallow in dry soil during rut and scent-mark with urine or dung.

Wild yaks are animals that live primarily in northern Tibet and the western Chinese province of Qinghai. Some populations extend into the southernmost parts of Xinjiang and India. Isolated populations of these animals are also spread throughout central Asia. Primary habitats are the treeless uplands of central Asia between 9,800 and 18,000 feet in mountain meadows and plateaus. They are commonly found in alpine tundra with thick grasses and sedges that provide their food. Some herds will migrate seasonally in search of food. They eat early in the morning and evening and don’t move about much, often sleep most of the day. During blizzards, these animals turn their tails into the storms and may remain motionless for hours.

In addition to being bred for their milk, domestic yaks are raised for their butter, which is turned into po cha, or Tibetan butter tea. Tibetans make this tea by adding yak milk, butter, and salt to black tea from Pemagul to make the traditional drink, which fortifies drinkers against the Himalaya Mountains’ thin, cold air. The tea is generally consumed by those living on plateaus above 17,000 feet.

Yak butter plays a central role in the Butter Lamp Festival held during the first month of the Tibetan calendar in Lhasa. Monks spend months carving sculptures out of yak butter, while lamps burning the butter line the streets during the festival.

Every summer, Tibetan nomads comb and process the soft, downy undercoat that yaks shed at this time of year. Coarse outer hair is turned into ropes, tents and wigs. The inner cashmere-like fibers are turned into textiles that have begun to rival traditional cashmere, made from Himalayan goat hair.

Yak dung is the only fuel on the high Tibetan plateau, but using it presents a biohazard as burning it produces annually 1,000 tons of black carbon, the second leading cause of global warming.

Yaks are herbivores, meaning they only eat plants. They spend a great deal of time in mountain meadows, grazing on grasses and other low-lying plants like sedges. Carex, Stipa, and Kobresia are among their favorite grasses. They also consume herbs, winter fat shrubs, moss, and lichen. Females like to graze on higher slopes than males, especially if they have young. They frequently drink during the summer and eat snow in the winter to stay hydrated. Like cows, they have two stomachs to efficiently extract all the nutrients out of the plants they eat.

Although domestic yaks are plentiful, the global population of yaks is dwindling and officially listed as vulnerable to extinction by the International Union for Conservation of Nature. In the early 1900s, wild yaks were hunted extensively by Tibetan and Mongolian herders and military personnel. Whereas only 50 years ago, as many as one million wild yaks roamed the Tibetan plateau, only about 10,000 remain today due to interbreeding with cows, loss of habitat, and poaching attacks by humans. Solitary males are particularly vulnerable to poaching. Disturbance by domestic livestock brings disease as well as interbreeding.

The Himalayan wolf is the yak’s natural predator, although in some areas snow leopards and brown bears have been known to prey upon young or infirm yaks.

Females enter estrus up to four times a year, yet mating typically occurs in late summer, sometimes even into September depending on the local environment. Gestation lasts between 257 and 270 days, resulting in the birth of a single calf in May or June. Double births are rare. Females find a secluded place to give birth, but soon rejoin the herd as calves can generally walk within 10 minutes of birth. Most females only give birth every other year, although more frequent births can occur if food is plentiful. They begin giving birth at about three to four years of age, with peak fertility at approximately six years.

Calves are weaned at a year old and become independent shortly thereafter. These animals have a lifespan of approximately 20 to 25 years, although some wild yaks may have a shorter life span.

Domestic yaks number between 14 million and 15 million in Asia. Yak ranching is also on the rise in North America, with about 5,000 currently being raised in the United States. They have been traditionally used as pack animals for caravans as well as for plowing and threshing. Yak dung is the only fuel available on the treeless Tibetan tundra. As late as the mid-1800s, wild yaks extended from Lake Baikal in Siberia to the Ladakh steppe in India. The Chinese Golden Yak, an endangered subspecies of the wild yak, only has about 170 individuals left in the wild. India and China have officially protected wild yaks, with the latter even creating special reserves where many herds of the wild population are located.

Yaks In the Zoo

Most zoos only have room for one type of wild cattle species, so they choose buffalo, bison, or yak. San Diego Zoo‘s Wildlife Park is one exception where visitors can see these animals as well as other species. San Diego Zoo has a careful, dedicated breeding program for endangered species, although most zoos do not.

View all 10 animals that start with Y

What is a yak?

The yak is a long-haired, short-legged cousin of the cow, native to the high plains plateaus of Tibet.

What is the difference between a yak and a cow?

The difference between yaks and cows is subtle and involves primarily how the two types of animals eat grass. Yaks do not graze in the same way that cows do. The latter cut the grass that they eat with their teeth. Yaks, on the other hand, scrape off grass with their tongue, leaving the soil intact.

What is the difference between a yak and a buffalo?

Both are members of the family Bovidae, but yaks are native to Tibet and the Himalayas in Asia, while buffalo are native to North America.

What is a female yak called?

Technically, yak refers only to the male of the species, while the female is called a dri or nak.

What does a yak eat?

What yak product has become a pet treat?

Chhurpi, a hardened yak milk cheese rich in omega-3 fatty acids that can take several hours to consume, has recently become a dog treat in North America, Britain, and Japan.

Is Yak Milk a Superfood?

Yak milk has high natural concentrates of fat, protein, and lactose, ranging between 4.0 and 7.5 percent, making it a superfood, according to the China Nutrition Society.

What Kingdom do Yaks belong to?

Yaks belong to the Kingdom Animalia.

What class do Yaks belong to?

Yaks belong to the class Mammalia.

What phylum to Yaks belong to?

Yaks belong to the phylum Chordata.

What family do Yaks belong to?

Yaks belong to the family Bovidae.

What order do Yaks belong to?

Yaks belong to the order Artiodactyla.

What type of covering do Yaks have?

Yaks are covered in Hair.

What genus do Yaks belong to?

Yaks belong to the genus Bos.

In what type of habitat do Yaks live?

How many babies do Yaks have?

The average number of babies a Yak has is 1.

What is an interesting fact about Yaks?

There are only a few Yaks left in the wild!

What is the scientific name for the Yak?

The scientific name for the Yak is Bos Grunniens.

What is the lifespan of a Yak?

What is a baby Yak called?

A baby Yak is called a calf.

How fast is a Yak?

A Yak can travel at speeds of up to 25 miles per hour.