The ancestor of all domesticated cattle! Click through all of our Aurochs images in the gallery. 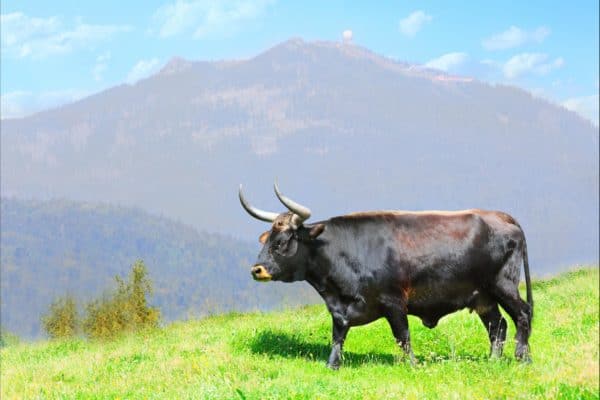 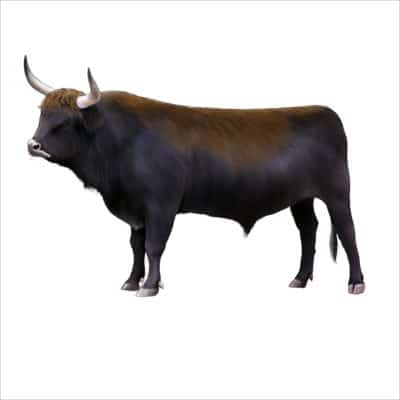 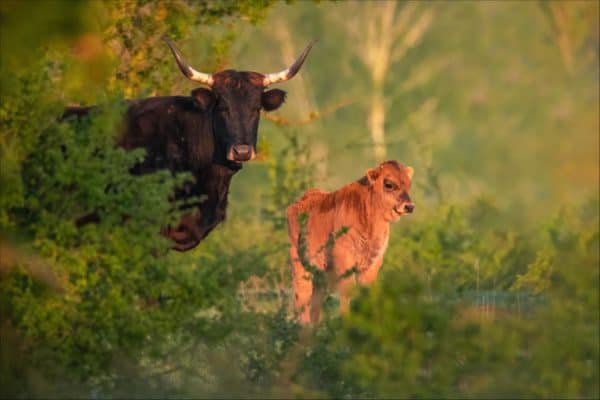 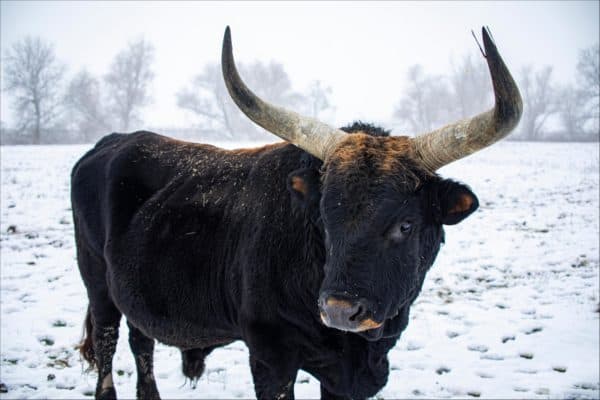 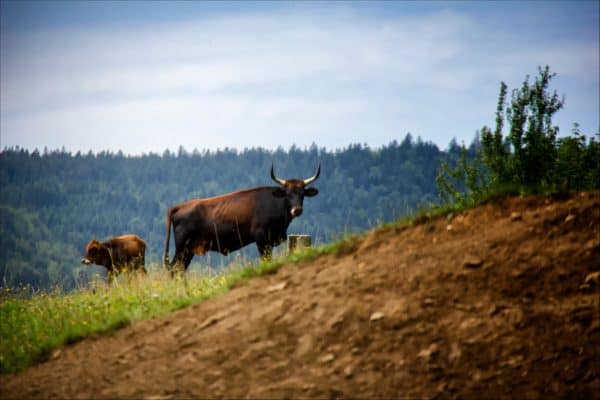 View all of the Aurochs images!

The aurochs were a species of wild bovines that once roamed a vast swath of territory throughout Europe, Asia, and North Africa. Resembling oversized cattle, this species used to be one of the most widespread grazing animals on the planet thousands of years ago. But population pressure from humans and domesticated cattle gradually reduced their numbers to a small range. The last known aurochs went extinct in 1627 in central Poland. However, the aurochs has held such a powerful grip on the human imagination that there have been numerous attempts to revive the extinct species from the dead.

The scientific name of the aurochs is Bos primigenius. The name derives from the Latin term meaning original or firstborn. This is meant to signify that the aurochs were the ancestors of all domesticated cattle. The more informal name of aurochs comes from the early modern German word for the species. An alternative name is the urus. The aurochs are part of the genus Bos, which includes all wild and domesticated cattle. There are generally considered to be three different subspecies of aurochs corresponding to their geographical regions. Some taxonomists may classify the domesticated cattle as another subspecies or its own separate species. More distantly, aurochs are related to gazelles, buffalo, antelopes, sheep, and goats as part of the family Bovidae.

The aurochs were a member of the order of even-toed ungulates — meaning hoofed animals that bear weight equally on two of their toes. Although they are extinct, scientists have been able to reconstruct their appearance with some degree of accuracy from skeletons, paintings, written descriptions, and genetic analysis. The aurochs was an animal that resembled modern cattle but with longer legs, a bigger skull, broad horns, and massive shoulder muscles. The coat color was a dark black or brown with a white stripe running down the spine. These formidable beasts probably measured up to six feet at the shoulder height and weighed somewhere between 1,500 and 3,000 pounds. This would make them among the largest bovines to ever live. Female cows were much smaller than the male bulls on average and also had smaller horns and a lighter color. Because scientists cannot directly observe the behavior of the aurochs, they must make some inferences based on written descriptions from the historical records and the behavior of modern cattle. It is believed that aurochs congregated in herds of up to 30 individuals for at least part of the year. It is also possible that some herds were mostly composed of a single sex at a time. Like modern bovines, they probably had complex social relationships that could either involve affection or dominance, depending on the situation. Both males and females engaged in fights and displays for social status. When provoked, the males were highly aggressive and could cause serious injury to any predators or threats. As they were larger than modern-day cattle, their charge could easily kill an adult human. When dealing with other members of the same species, however, their aggressiveness probably depended on the difference in rank. Disputes could be settled peacefully as well. Like many other ungulates, the aurochs probably had eyes with horizontal pupils on the sides of their heads to give them a wide view of their surroundings. They also obtained a lot of information from their senses of smell, hearing, and touch. Based on the modern study of cognition in cattle, it’s possible that the aurochs had a limited ability to remember food sources and distinguish between familiar relations. They had a number of different vocalizations to communicate with other members of the species or give warnings to potential threats. 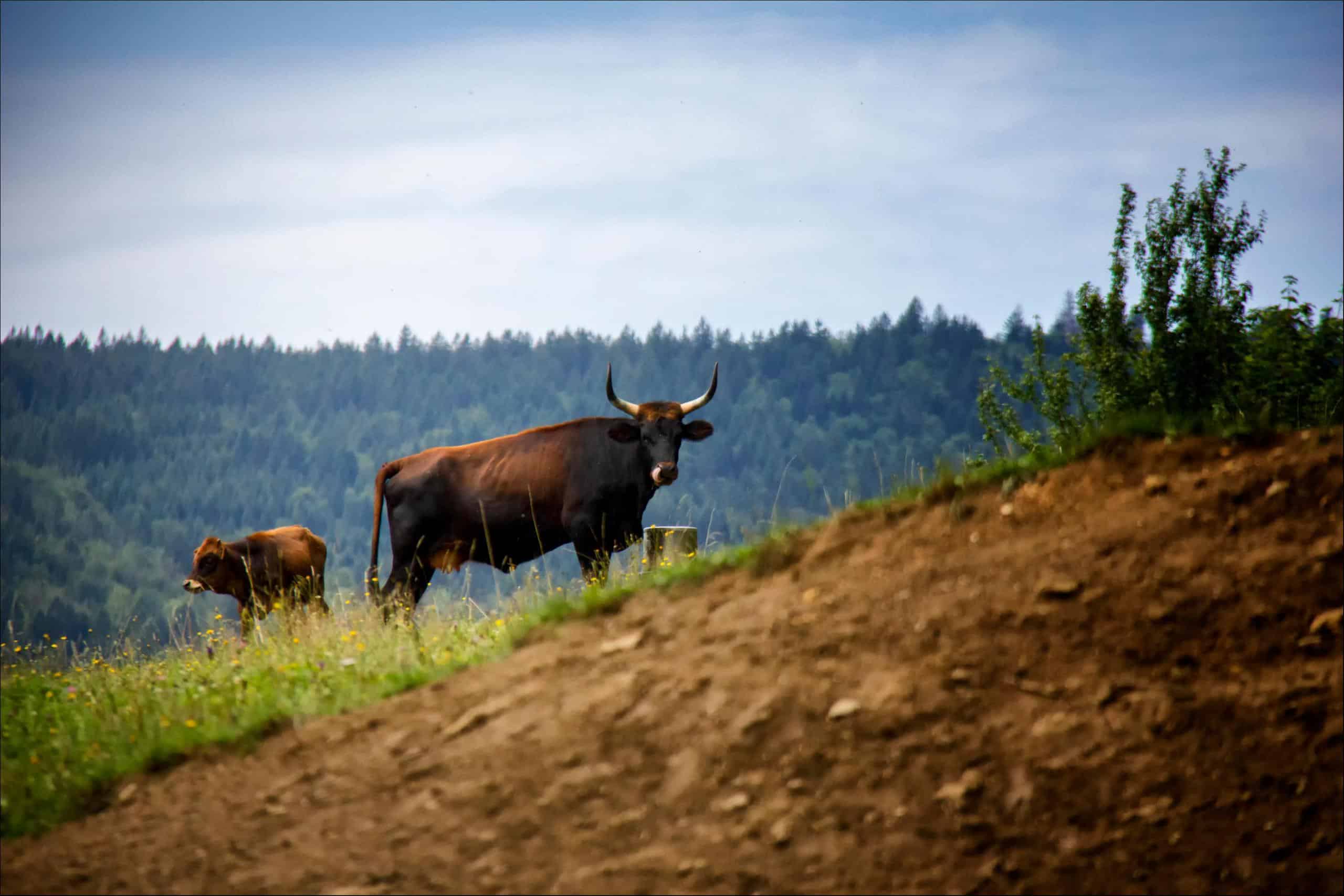 At the height of their population, the aurochs roamed across most of the Eurasian supercontinent. The main subspecies of aurochs, Bos primigenius primigenius, covered a huge range of territory from the Atlantic to the Pacific, though it was probably absent from Ireland, the Arabian Peninsula, South Asia and Tibet, Japan, and the far north. A second subspecies, Bos primigenius namadicus, was primarily found in the Indian subcontinent. A third subspecies, Bos primigenius africanus, inhabited the North African region from Morocco to Egypt. The aurochs preferred to inhabit grasslands, floodplains, and lightly forested woodlands in temperate climates. This enabled it to thrive in a huge number of different places. However, due to the large grazing lands needed to maintain their population numbers, it also put them at conflict with people and domesticated cattle for living space. As human civilization spread, the species gradually died out over most of its habitat and only survived in Eastern Europe until the 17th century.

The aurochs obtained all of their nutrients from grazing huge expanses of land. The most common foods they ate were grasses, twigs, and even acorns. Aurochs had a four-chambered stomach that contained various bacteria to help them break down and digest the tough cellulose of plant matter. Each compartment had its own specialized task. Food may spend dozens of hours in the animal’s stomach, during which it is regurgitated, chewed over, and swallowed again multiple times. Nearly all even-toed ungulates can claim to have a multi-chambered stomach.

Only the most ferocious predators, such as wolves and prehistoric large cats, dared to take on the adult aurochs. Their massive size offered them a huge degree of protection against predators. However, young calves were vulnerable to being picked off if they wandered too far from the herd. Sick adults left behind by the herd also made an easy target for hungry predators. The spread of human civilization and domesticated cattle probably marked a turning point in the fortunes of the aurochs. Even before the rise of modern industry, it is believed that aurochs went extinct from a combination of hunting, habitat loss, and disease transmission from cattle. Aurochs hunting was often done for practical purposes to obtain meat, skin, and horns. But as numbers declined, aurochs hunting became a sort of sport for the privileged nobility and elite, particularly during the medieval period in Eastern Europe.

Although aurochs are long extinct, scientists have gained some insights into aurochs breeding from the study of historical writings and observations of modern cattle behavior. The mating season probably took place in the late summer or early autumn. Males competed fiercely to attract females and ward off rivals. After a gestation period of several months, the calves would be born at some point in the spring. They started out with a lighter coat color at birth and gained their darker coat after a few months of life. The calves would stay close to the herd and receive care and attention from the mother until reaching the age of independence, after which they could choose to stay with the herd or join a new one. Assuming the aurochs are similar to cattle, it’s possible that they reached sexual maturity after a few years and lived near 20 years in the wild.

Due to various population stresses, there are currently no aurochs left in the world. The last member of the species passed away from natural causes in 1627. It has been suggested that the loss of the aurochs was a serious blow to the biodiversity of its native habitat. By grazing on grasses, aurochs served the purpose of keeping the landscape trimmed and pristine. Forests overtook many of the areas from which the aurochs disappeared. Several attempts have been undertaken to bring back an aurochs-like animal by selectively breeding domesticated cattle until the desired appearance is produced. This is only possible because of the extreme genetic similarities between the two animals. The first attempt was undertaken in the 1920s by two German zoo directors. Their experiments produced the Heck cattle. Though novel, the cattle does not appear to completely resemble the extinct aurochs. The Tauros Programme is a more recent and sophisticated effort to bring back the aurochs using the tools of modern biology. The program’s scientists took primitive breeds of cattle and began breeding them together to recreate the aurochs. It is estimated to take seven generations of breeding — or until around 2025 — to achieve an animal similar to the aurochs. Another possible method is to resurrect the original aurochs from the remains of preserved DNA. Due to its relatively recent extinction, the aurochs left behind intact tissue that has degraded relatively little. It may also be possible to edit the cattle genome directly to create a species that more directly resembles the lost aurochs. Because of the unpredictable consequences, the wisdom of reviving the aurochs and releasing it into the wild is being constantly debated by experts.

What is an aurochs?

The aurochs was a species of wild cattle that lived for around 2 million years in Europe, Asia, and North Africa. It resembled a bigger and more muscular version of the familiar domesticated cattle that now dominates around the world.

Were aurochs carnivores, herbivores, or omnivores?

Like other cattle, aurochs were herbivores that ate mainly grasses.

The aurochs are now completely extinct throughout their former range.

How big was an aurochs?

The size of the aurochs could vary quite a bit based on the time period in which it lived, its location, and its sex. It is believed that an individual aurochs could be anywhere between 4 and 6 feet tall at the shoulders and weigh at least 1,500 pounds. The largest specimens unearthed may have weighed more than 3,000 pounds. Since aurochs no longer exist, scientists must rely on existing skeletons and eye witness reports from the time.

How did the aurochs evolve?

Because of their close evolutionary links to domesticated cattle, the history of the aurochs is of great interest to modern biologists. It is believed that the aurochs originated from India some two million years ago. The colder climate around that time probably caused open grasslands to spread around the world. Taking advantage of these favorable circumstances, the aurochs then gradually radiated outward toward Europe and East Asia over hundreds of thousands of years. At some point, it is suspected that the aurochs and domesticated cattle grew distinct enough that there was little genetic exchange between them.View all 62 animals that start with A

Are Aurochss herbivores, carnivores, or omnivores?

What Kingdom do Aurochs belong to?

Aurochs belong to the Kingdom Animalia.

What phylum do Aurochs belong to?

Aurochs belong to the phylum Chordata.

What class do Aurochs belong to?

Aurochs belong to the class Mammalia.

What family do Aurochs belong to?

Aurochs belong to the family Bovidae.

What order do Aurochs belong to?

Aurochs belong to the order Artiodactyla.

What type of covering do Aurochs have?

Aurochs are covered in Hair.

Where do Aurochs live?

In what type of habitat do Aurochs live?

What are some predators of Aurochs?

Predators of Aurochs include wolves and large cats.

What is an interesting fact about Aurochs?

Aurochs are an extinct ancestor of all domesticated cattle!

What is the lifespan of a Aurochs?

Aurochs can live for an average of 20 years.

How many Aurochs are left in the world?

The Aurochs is extinct.