Click through all of our Zebra Shark images in the gallery. 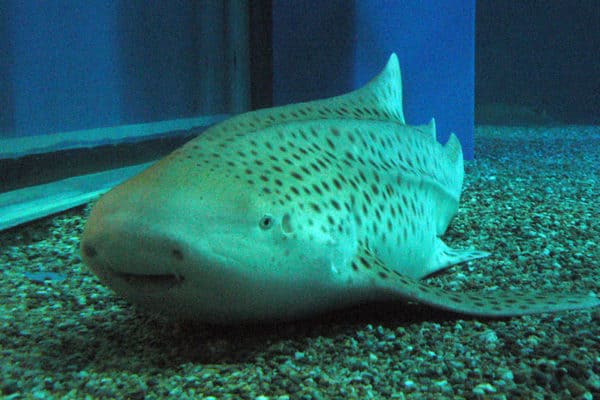 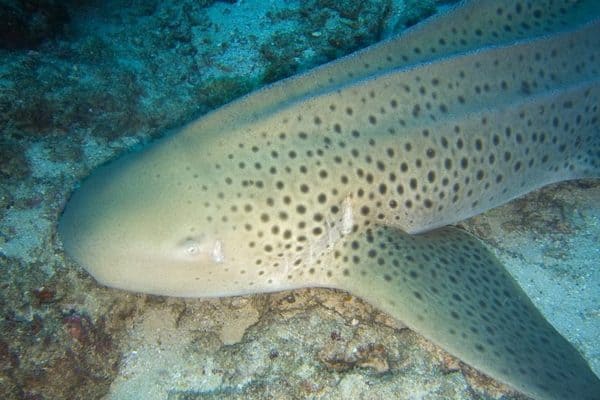 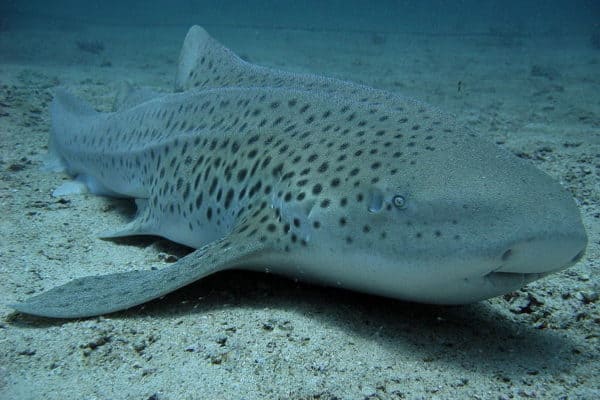 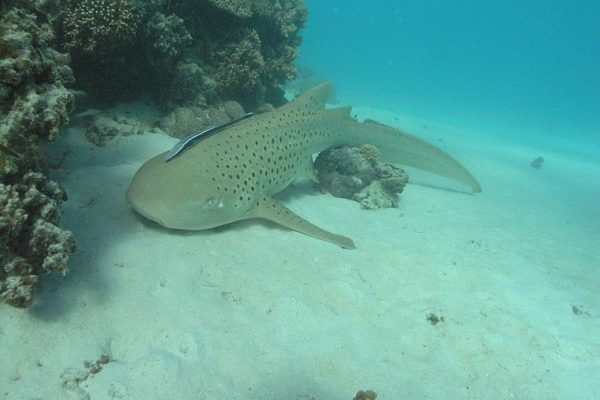 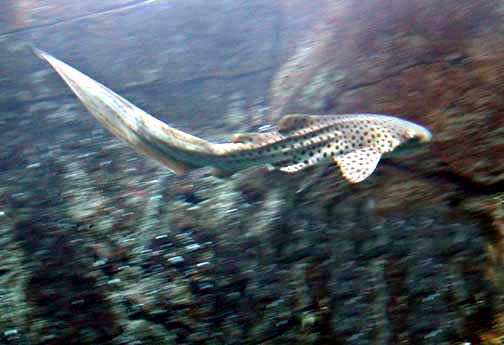 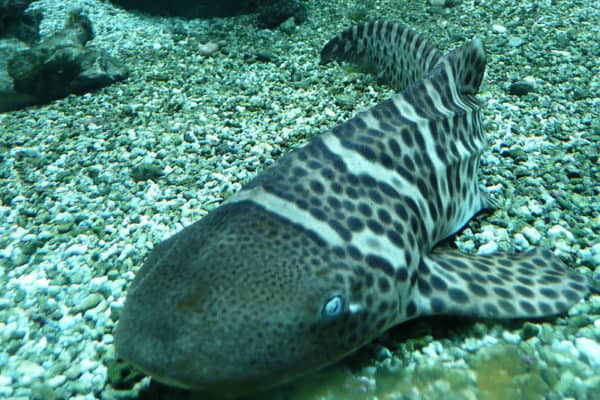 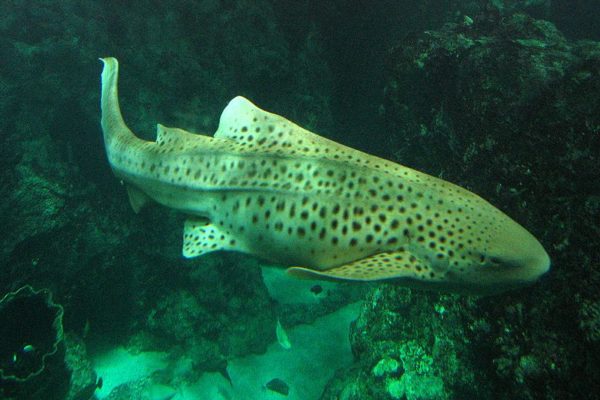 View all of the Zebra Shark images!

While zebra shark ‘pups’ do have stripes when they are born, those actually turn into spots as they grow!

Zebra sharks are gentle fish that hang around coral reefs in tropical oceans. They spend their days sleeping and their evenings leisurely hunting around the sea floor and eating. Because of climate change and human activity, zebra shark numbers are in free fall. A worldwide effort is underway to save them, and there are small things we can all do to support their survival.

The proper scientific name for zebra sharks is like the tastes-great-vs-less-filling beer debate of the marine taxonomy world. The majority of scientists use Stegostoma fasciatum. However, another school of thought believes Stegostoma varium is the right choice. A 2019 taxonomic review complicated matters when it concluded that Stegostoma tigrinum is the correct term.

Stegostoma is a portmanteau (word made up of two other words) of the Greek words “stego” and “stoma,” meaning “covered” and “mouth,” respectively. Fasciatum also derives from Greek and means “banded,” a reference to baby zebra sharks’ stripes.

Zebra sharks are sometimes mistaken for and called “leopard sharks” because adults of the species lose their stripes and gain spots.

Zebra sharks have flat heads with itty-bitty eyes on either side, short snout mouths jammed with 50 to 65 teeth, and cylindrical bodies that can twist and turn like an acrobat. They typically grow to a length of 2.5 meters (8.2 feet), and the current record for the longest adult is 3.5 meters (11 feet) — twice the height of actor Danny Devito!

At birth, zebra sharks sport dark brown skin on top, yellowish bellies, and vertical yellow stripes. As they grow, the stripes separate into spots. Marine biologists believe the stripes serve as camouflage for the newborns.

We generally think of sharks as aggressive and deadly, but zebra sharks mellow to a chiller vibe. They spend most of the day snoozing on the ocean floor and face the current to facilitate low-effort breathing. Then, at dusk, zebra sharks sluggishly rise and spend the night slowly swishing around in search of food.

For the most part, zebra sharks are loners who gather together every once in a while. Quizzically, every summer, several hundred zebra sharks convene in shallow waters off the coast of Queensland. Thrice as many females show up, but no mating appears to happen. Though it’s been studied, the ritual has left scientists stumped.

Zebra sharks are generally gentle with humans and let us get close. They’ll even take food right out of a diver’s hands and let themselves be pet! Just don’t take it too far, they can become aggressive when annoyed.

Unlike many other species, zebra sharks adapt well to captivity and are prominent features in many large aquariums around the world.

Zebra sharks roam the tropical waters around Madagascar, Maldives, India, Indonesia, Philippines, Palau, Taiwan, Japan, New Caledonia, Tonga, and Australia. As bottom-dwelling animals that can live up to depths of 200 feet, they mostly hang out around coral reefs, sandy areas, and marine rubble. Zebra sharks primarily live in ocean water, but have been spotted tooling around freshwater basins on occasion.

What do zebra sharks eat? Shelled mollusks, snails, sea urchins, crabs, squid, crustaceans, small bony fish, and sea snakes are on the zebra shark menu. And thanks to their flexible and svelte bodies, zebra sharks can slink into nooks and crannies when foraging for them.

Zebra sharks don’t just chew their food. Instead, their mouths are equipped with powerful suction mechanisms that act as vortex vacuums that suck in prey in one gulp. To uncover food, they have whisker-like organs on their snouts called “barbels” that serve as sustenance sensors.

Save for a few large shark species — like tiger sharks and bull sharks — zebra sharks have few natural predators. Humans, however, are a huge threat. In some regions, poachers have free reign to hunt them for fins and liver oil. The former is for a delicacy called “fin soup”; the latter is used in vitamins.

Habitat encroachment presents another fatal problem for zebra sharks, as does the erosion and debasement of coral reefs.

During mating season, male zebra sharks chase females and show interest by snapping at their tails. When a match meets, the male grasps the female’s pectoral fins, and they attach. The pair then lies still together for a while on the ocean floor. Eventually, the male wraps himself around the female and inserts one of his claspers (modifications of the pelvic fins) into her cloaca for a few minutes.

Females lay about four brown or purplish eggs at one time, which are ringed with a light layer of hair that clings to the nesting surface. Each breeding season, a single female may lay up to 46 eggs in over 112 days.

Depending on the temperature, eggs incubate for five to six months and burst into the world as 20- to 30-centimeter-long (7.9- to 14.2-inch-long) hatchlings.

Fascinatingly, zebra shark females can reproduce without males. It’s called parthenogenesis, which means reproduction without fertilization. Two well-documented incidents involve Leonie, a female zebra shark in Australia, and Zebedee, the lady resident zebra shark in a restaurant aquarium at the world’s most luxurious resort in Dubai. Both females haven’t been around males for years but managed to lay eggs that successfully hatched.

Baby zebra sharks are called “pups” and come into the world looking very different than what they’ll grow up to be. At hatching, they’re between 20 and 30 centimeters (7.9 to 14.2 inches) long and are sometimes mistaken for baby bullhead sharks that also sport yellow stripes on brown skin.

What is the lifespan of a zebra shark? When spared from habitat destruction and other fatal conditions spawned by human encroachment, zebra sharks can live between 25 and 30 years. Some reports suggest that they may live shorter lives in captivity.

Zebra sharks are under threat from overfishing and habitat loss. The International Union for Conservation of Nature classifies the species as Endangered, except for the Australian coastal population, which doesn’t face poaching or overfishing threats and is therefore listed in the Least Concern category.

In 2008, the AZA Marine Fish Taxon Advisory Group urged zoos and conservation programs to develop species survival plans and managed breeding programs for zebra sharks. Interested parties took to the task and implemented collaborative initiatives. As a result, there is now an international zebra shark studbook that helps zoos and aquariums facilitate breeding and transfer schedules to maintain genetic diversity.

Zebra Sharks are omnivores, meaning they eat both meat and plants. However, they mainly stick to seafood and will settle for marine flora in a desperate pinch.

In 2008, an unprovoked zebra shark attacked a human. Thankfully, the incident didn’t result in injuries, but it did shock the marine world because zebra sharks are usually exceptionally docile creatures that play well with people. Most researchers believe the attack was an outlier and still characterize zebra sharks as safe and gentle animals.

Where Do Zebra Sharks Live?

Zebra sharks live in Indo-Pacific waters. Their range stretches from the western part of the Pacific Ocean from Australia to Japan to the countries bordering the Indian Ocean and Red Sea.

Are Leopard Sharks and Zebra Sharks the Same?

No, leopard sharks and zebra sharks are not the same species. They are, however, often confused because of their similar spotted patterns as adults.

What Can I Do To Help Zebra Sharks?

Zebra sharks are facing tough times. To ensure their survival, pitch in by not buying any products that lead to overfishing the animal, including shark meat, shark cartilage pills, or shark fin soup.

What Kingdom do Zebra Sharks belong to?

What phylum do Zebra Sharks belong to?

What class do Zebra Sharks belong to?

What family do Zebra Sharks belong to?

What order do Zebra Sharks belong to?

What genus do Zebra Sharks belong to?

What type of covering do Zebra Sharks have?

What is the main prey for Zebra Sharks?

What are some predators of Zebra Sharks?

Predators of Zebra Sharks include large sharks and humans.

What is the average litter size for a Zebra Shark?

The average litter size for a Zebra Shark is 10.

What is an interesting fact about Zebra Sharks?

Zebra Sharks can live for up to 30 years in the wild!

What is the scientific name for the Zebra Shark?

The scientific name for the Zebra Shark is Stegostoma Fasciatum.

What is the lifespan of a Zebra Shark?

What is the lifespan of a Zebra Shark?

What is the optimal pH for a Zebra Shark?