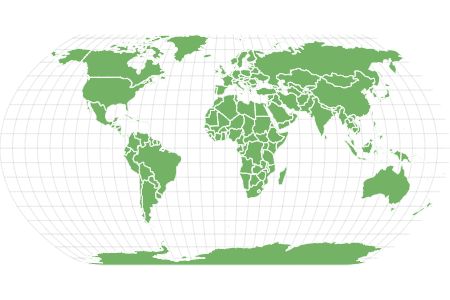 View all of our Leopard Shark pictures in the gallery.

View all of the Leopard Shark images!

Leopard Sharks are known for their striking patterns, which give them their name and fascinating appearance.

These sharks live on the West Coast of North America where they eat small ocean creatures such as clams, crabs, and shrimp. They are harmless to humans and popular in aquariums due to their interesting patterns.

Leopard Sharks are known in scientific circles as Triakis semifasciata. They belong to the Triakis genus, which includes five species. Triakis means “three-pointed.” These sharks were named this due to their three-pointed teeth.

The most striking and recognizable feature is the Leopard Shark’s banded pattern on its back. These sharks have gray bodies and black or dark brown bands, with lighter-colored markings in the center. Dark circular spots dot their backs in between the bands. Their underbellies are white.

These sharks are around 20 pounds and between 4 and 5 feet long. They are medium-sized sharks but have a shorter body that is compact. Females are larger than males, often by up to a foot in length. The largest Leopard Shark on record weighed just over 40 pounds.

Their genus name, Triakis, means “three-pointed” and refers to their teeth. Leopard Sharks have between 41 and 55 teeth in their upper jaw and between 34 and 45 teeth in their lower jaw. These teeth have a smooth-edge pointed cusp in the center and an additional smaller cusp on each side. Because of this, scientists named the genus “three-pointed” or Triakis.

Leopard Sharks live off the West Coast of the United States and Mexico in the Pacific Ocean. They have a relatively small habitat, which runs from Oregon down to the Gulf of California. They can be found there year-round and do not migrate very far.

These sharks like to explore inlets, making them easy to spot and study. Researchers can identify them easily by their markings. Many Leopard Sharks come to Matlahuayl State Marine Reserve in La Jolla, California, which are now protected waters. Scientists at the San Diego Zoo see them often in the warmer summer months. The sharks they study include many pregnant females.

Leopard Sharks like to swim near the ocean floor. They store oil in their livers to help them maintain their position in the water. Many fish have air sacs to maintain buoyancy. This means that they float when they are not swimming. Leopard Sharks, on the other hand, do not have air sacs. They tend to sink when they aren’t swimming. Their food is often closer to the ocean floor, however, which makes this arrangement work for them.

These sharks are not considered endangered. They have protected waters to live in and are not hunted regularly by humans. They are occasionally caught and eaten. However, they contain high levels of mercury due to their long lifespans. This makes them less than ideal for human food.

Where to find: Leopard Sharks and How to Catch Them

Like all animals, Leopard Sharks are at risk when their natural habitat or reproduction habits are impacted. Leopard Sharks take a long time to reach maturity. Fishing for and catching juvenile Leopard Sharks can have an effect on the overall population if these sharks are not able to reproduce.

Other fish and sharks do not generally eat Leopard Sharks. Instead, their risk for survival comes from their dwindling habitat. They are also occasionally caught for their fins or as by-catch in large-scale fishing operations.

Larger sharks, such as the Sevengill Sharks may be tempted by a tasty juvenile Leopard Shark snack. Staff at places like the Monterey Bay Aquarium have to be careful to keep the young Leopard Sharks in smaller exhibits until they grow large enough to not be of interest to larger sharks anymore. They can then go into large exhibits, such as the Kelp Forest or Open Ocean tanks.

What do Leopard Sharks eat?

Leopard Sharks’ mouths open downward, bringing up food from the ocean floor. They suck up crabs, clams, shrimp, and fish eggs like a vacuum. As they grow, they move onto larger fish, other sharks, and even octopuses.

Leopard Sharks give birth similar to humans! No, they don’t go into the hospital with celebratory balloons, but they do give birth to live young. They are called pups as babies and are around 8 or 9 inches long. Mother Leopard Sharks do have eggs but they are kept internally. The eggs hatch inside the mother, who then gives birth to up to 30 pups at a time.

It takes around 10 years for a female Leopard Shark to reach breeding age. Because of this, they can experience dwindling population numbers. It takes a long time for a newly born pup to reach adulthood. Researchers take special interest in pregnant female Leopard Sharks and their habits to help with conservation efforts.

Leopard Shark in Fishing and Cooking

Leopard Sharks are not frequently fished for or caught intentionally. A few fishing companies, mostly commercial, do sell the fins of Leopard Sharks as a delicacy.

They contain high levels of mercury, a known toxic substance. You can eat Leopard Shark. But like other large fish, such as tuna, you should limit your consumption to avoid consuming too much mercury which can lead to health problems.

View all 77 animals that start with L

Is Leopard Shark a good fish to eat?

While you can eat Leopard Shark, you should do so sparingly due to the high mercury content in the fish.

Leopard Shark is a firm, white fish that can be seasoned and panfried or grilled.

What kind of fish is a Leopard Shark?

Leopard Sharks are part of the Triakidae family, also known as houndsharks.

Is a Leopard Shark a freshwater or saltwater fish?

Leopard Sharks live in saltwater in the Pacific Ocean, off the West Coast of North America from Oregon to the Gulf of California, Mexico.

How big are Leopard Sharks? 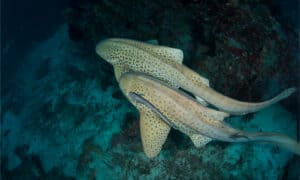 Are Leopard Sharks Dangerous Or Aggressive?