Parakeets are small or medium-sized birds with long tails and flexible bodies. They are intelligent birds that are easy to train and, due to their small size, would make a great pet. Parakeets live predominantly in Australia, where they are known as budgerigars or budgies. In Australia, they are mostly found in the warmer climate and coastal areas where food is most abundant. However, all budgies are parakeets, but not all parakeets are budgies, and there are many species within the parakeet family.

Parakeets can have up to 3,000 feathers across their entire bodies, and it is estimated that dozens of colorful kinds are kept as pets. Around 115 species in 30 genera of the subfamily Pssittacinae (family Psittacidae) are named parakeets.

Parakeets are one of the most vocal birds in the parrot family. They are known for their ability to talk back by mimicking sounds they hear. Although they don’t have vocal cords, they have a highly developed system of sounds, shrills, and squats, that are employed in warning others of predators or the availability of food in a particular vicinity. Parakeets are regarded as some of the best talkers and have an estimated vocabulary of up to 2,000 words. They currently hold the record for the largest bird vocabulary.

2. The parakeet is a flock bird

Parakeets are flock creatures, and their entire world is their flock. A parakeet without a flock is an incomplete, lonely parakeet and, as such, should be kept in pairs, at least when in captivity. A pair of parakeets will generally be happier than a single parakeet. Single parakeets can become extraordinarily devoted pets. Given that they are driven instinctively to seek out others to form social relationships with other living beings, a lone parakeet would tame itself and come to you. In this case, you will become your parakeet’s flock.

3. The cere above a parakeet’s beak reveals its gender

The sexes look alike but can be told apart during the breeding season by the cere’s color. The cere is a fleshy covering located directly above a parakeet’s beak. The cere is a certain color depending on the bird’s sex. Most mature male parakeets in the breeding season have a bright or royal blue cere, while the female may be brown. Juveniles appear duller in color than adults. Parakeets may also have more differences in the ultraviolet spectrum.

4. Parakeets do not create their nest

Parakeets are monogamous and can be quite close to their neighbors. In Australia, they inhabit the mainland, where they like to nest in cavities along fences, logs, eucalyptus trees, or hollow trees. Their nests may only be a few feet apart from their neighbors. The females tend to nest and lay 4 to 8 eggs in a tree hole over a few days. These eggs are incubated for 18 days, and the chicks leave the nest about a month later. Breeding will begin within the first year of their lives.

One fascinating fact about a parakeet is the presence of four toes on each foot, two facing forward and two facing backward. This is called zygodactyl. These toes allow for grabbing toys, holding objects, and climbing. However, unlike parrots, they do not use their feet to eat. Instead, they make good use of their beaks to eat.

Parakeets are very active and social little ones who need adequate attention to be happy. They can become very nervous and can be seen pacing around the cage when they feel they are not getting enough attention. They are content with interacting with their pet parents, conversing, and having enough room to fly and play. Parakeets are affectionate, notorious, intelligent, and make amazing companions. It is fascinating to watch them do what they love to do most.

Parakeets are omnivores that mostly eat seeds. Their diets are broad, consisting of many nuts, fruits, insects, and plants. Commonly, they form large flocks that may be serious pests in grainfields and crop seeds such as corn and wheat. To provide a more nutritionally balanced diet, fruits and vegetables should make up about 15% of your parakeet dish, while a 50/50 mixture of pellet and seed should be given.

8. Most adult parakeets have few predators

Interestingly, parakeets have few predators. Scientists believe that the reason for this is that these birds flock in groups from a dozen to over a hundred and that predators are often confused and afraid when they see them. They have hundreds of possible secondary color mutations. They are green and yellow, but captive individuals may be white or blue. Sometimes, they are preyed on by birds of prey, but their color helps them blend in with their environment.

Parakeets often change location in the wild. They migrate north and south based on the climate and inhabit warmer areas where food is most abundant. Parakeets live in open habitats and require a source of drinking water nearby. They are capable of traveling many miles in search of water. They have to drink water to stay hydrated since their diet consists of very low-moisture seeds. Yet, drought can be detrimental to these parakeets.

Parakeets can live for 5-10 years in the wild, but they may live more than 20 years in captivity. This is possible if they are managed properly and on a healthier diet. They typically can reach a height of about 7 to 14 inches long and weigh approximately 1.06 – 3 ounces. 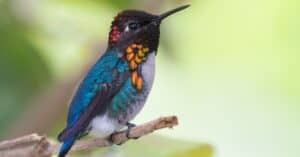