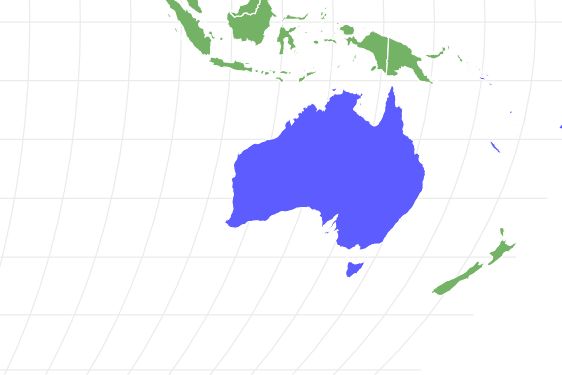 View all of our Budgerigar pictures in the gallery.

View all of the Budgerigar images!

Native to Australia, Budgerigars are a stunning nomadic parrot, marked with green and yellow coloration on their chests and back. Black feather patterns also decorate their backs. Males have blue coloring around their beaks while females have pink or purple coloring in that area.

Budgerigars spend a majority of their time in trees and build intricate nests with knots or other depressions just large enough to hold their eggs. Budgerigar birds are highly social amongst themselves and can be with humans as well. Males and females will pair up and live together in loose colonies in both the northern and southern territories. In the wild, these birds can live up to 15 or 20 years.

Budgerigars are rather easy to domesticate and make a good pets. They become extremely attached to their owners and will be able to recognize you even if you change your hairstyle or your clothes. Budgerigars can pick up on a large vocabulary and enjoy talking with humans. Some budgies have been able to speak hundreds of words.

Where to Find Budgerigars

Budgerigar birds are native to Australia and they migrate north and south throughout the country in the wild. These birds are also highly social, making them popular pets throughout the world.

Budgies also populate North America, South America, Europe, and Africa due to their status as one of the most common pet birds. In fact, there are reportedly up to five million of these little birds in the world today.

Only one bird species goes by the common name Budgerigar or Budgie. They are the sole species in the Melopsittacus genus. This creature’s full scientific name is Melopsittacus undulatus.

Health and Entertainment for your Budgerigar

Budgies are smaller than many other parrot varieties. They normally only weigh between 1 and 1.5 ounces. They are often only seven inches tall and have a total wingspan of 12 inches.

Although Budgies can come in one of a thousand different color combinations, yellow and green are the most common colors. Hints of blue as well as black often mark their heads and backs. The tail feathers can extend up to 4.5 inches.

Depending upon where you look for information, some people will tell you that parakeets and budgies are the same. Essentially, this fact is true. However, the term “parakeets” refers to any number of small bird species with long tail feathers.

By some counts, there are nearly 400 individual parrot and parakeet species all over the Earth. Budgerigars are one species of bird that makes its home in Australia. The distinction between what these birds are called depends upon location. Australia, Europe, Africa, and the rest of the world call these small, brightly colored avians “budgerigars,” while, in the US, these same birds are referred to as “parakeets.”

Budgies typically have a lifespan between five and ten years in captivity, but some of these birds have lived 15 years or more. Other parakeet species such as the monk parakeet, can live up to 20 years or more.

Budgies are social creatures., preferring to pair up in the wild and will even live in small colonies of a few hundred when not migrating. In captivity, these birds are playful and have a knack for mimicking speech and sounds. They are outgoing and love talking with their humans.

Out in nature budgerigars prefer to live in tree holes or other crevices large and flat enough to lay their eggs. However, as pets, these birds will be happy with a flat box or floor filled with a soft material. Clean wood shavings or bits of shredded paper will do nicely for your pet budgie.

Budgerigars rely on grass seeds for most of their nutrition. They also root around on the ground for fruits and vegetation. Berries are also a popular snack, but too much fruit may make a budgie sick.

The overall budgie population is on the rise. Easily and cheaply kept as pets, habitat destruction and other risks that would be of concern for other wild creatures are not a major concern for these birds. However, larger birds such as hawks and falcons do prey upon the budgie. Feral cats, rats, and other rodents sometimes raid budgie nests for eggs or hunt the birds themselves.

Female budgies reach adulthood around eight months of age. In the wild, these birds will pair up to mate and raise offspring. Females normally lay between four to six eggs in a single clutch. The eggs can take up to 20 days to incubate prior to chicks hatching. Sometimes, it takes another week to 10 days for all the eggs to hatch.

Chicks are born blind and without down or other feathers. Their mothers are responsible for keeping them warm constantly over the first 10 days or so until their eyes open. They will then begin to grow down and feathers, but it will be another four or five weeks before these younglings can leave the nest.

Between six and eight weeks, fledglings begin to learn to fly and begin attempting to leave the nest. Age for flight varies depending upon the number of chicks in the brood and the age of each chick. For example, chicks born with no other nest-mates often learn to fly sooner than birds from larger clutches. “Only children” benefit from their parents’ extra attention.

The budgerigar’s conservation status is labeled as least concern as far as its risk for becoming engendered. They reproduce easily and frequently, both in the wild and in captivity. As a result, the total worldwide budgie population is estimated at more than 5,000,000 birds and growing.

What is a budgerigar?

A Budgerigar, or budgie, is a small Australian bird that likes to live in tree trunks. These birds have bright colors such as green, yellow, and blue on their feathers. Black markings are common on the budgie’s back and face. Their wingspan is only 12 inches and they usually weigh less than 1.5 ounces.

Does the Budgerigar migrate?

Yes! Although wild Budgerigars remain on the island of Australia, they do still migrate. These birds travel from the northern territories to the southern part of the continent and back again throughout the year. They will remain in the north during the warmer months in December through March and then fly south as the weather turns colder in March through August.

How many eggs does the Budgerigar lay?

The female budgerigar will lay between four and six eggs at a time. Wild Budgerigars normally try to procreate between June and September if they are in the northern territories. After they migrate south, then they will try to reproduce between August and September.

How fast does the Budgerigar fly?

This bird species has two different speeds. A slow speed of about 11 miles per hour for increased maneuverability and a top speed of 22 miles per hour. These birds normally soar closer to their top speed when they are migrating or otherwise have clear open skies around them.

What is the Budgerigar’s Wingspan?

This bird is comparatively small to other parrot species. Its wingspan typically measures 12 inches, and it stands only between seven and nine inches tall.

When do Budgerigars leave the nest?

Budgie chicks are born without feathers and blind. As a result, they rely heavily on their parents for warmth and food over the first few weeks of their lives. Their eyes open after about 10 days and they begin to grow feathers shortly thereafter. By the time they reach six to eight weeks of age, the chicks are big enough to leave the nest.

How do you pronounce budgerigar?

One popular story is that the name budgerigar, pronounced buh-jr-uh-gaar or budge-ri-gaar, comes from the Australian Aborigine culture. This bird’s name derives from the word betcheryygah, which means “good food”.

What is the difference between a parakeet and a budgie?

Parakeet is a general term used in the United States that refers to hundreds of small-sized bird species. Parakeets all have long tails compared to the rest of their bodies. Budgerigars, or budgies, are one specific species of small bird that is native to Australia.

How do you tell the sex of a budgerigar?

Yes! Like many other larger parrot species, the budgerigar loves talking In fact, some budgies have developed the ability to sing and speak hundreds of individual words.

Are Budgerigars herbivores, carnivores, or omnivores?

Budgerigars are Omnivores, meaning they eat both plants and other animals.

What Kingdom do Budgerigars belong to?

Budgerigars belong to the Kingdom Animalia.

What phylum do Budgerigars belong to?

Budgerigars belong to the phylum Chordata.

What class do Budgerigars belong to?

Budgerigars belong to the class Aves.

What family do Budgerigars belong to?

Budgerigars belong to the family Psittacidae.

What order do Budgerigars belong to?

Budgerigars belong to the order Psittaciformes.

What genus do Budgerigars belong to?

Budgerigars belong to the genus Melopsittacus.

What type of covering do Budgerigars have?

Budgerigars are covered in Feathers.

In what type of habitat do Budgerigars live?

Budgerigars live in open woodlands and grasslands near water.

What is the main prey for Budgerigars?

What are some predators of Budgerigars?

Predators of Budgerigars include humans, snakes, and large birds.

What are some distinguishing features of Budgerigars?

What is an interesting fact about Budgerigars?

Budgerigars are natively found in Australia!

What is the scientific name for the Budgerigar?

The scientific name for the Budgerigar is Melopsittacus undulatus.

What is the lifespan of a Budgerigar?

Budgerigars can live for 3 to 6 years.

How do Budgerigars have babies?

Are there different types of budgerigars?

There are two types of budgies common as pets: the American budgie and the English budgie. The main difference between English vs American budgies is their size.

How to say Budgerigar in ...