Written by Emmanuel Kingsley
Updated: December 19, 2022
© Geoffrey Kuchera/Shutterstock.com
Share this post on:
More Great Content:
Skunk Poop: What Does Skunk Scat Look…
What Do Skunks Eat?
What’s a Baby Skunk Called + 4…
Skunk Teeth: Everything You Need To Know
Do Skunks Make Good Pets?
Do Skunks Hibernate in the Winter?
↓ Continue Reading To See This Amazing Video

The skunk is a domestic cat-sized, well-furred, tiny carnivore. It has distinctive black and white patterns and the most well-known protection strategy in the animal kingdom: the ability to stink. Additionally, they are immune to rattlesnake venom — a little-known but wildly impressive fact.

Skunks are usually classified, since 1997, with their group Mephitidae from the word “mephitical,” meaning “noxious vapor.” Skunks, along with otters and badgers, were once considered a part of the weasel family. The new family consists of two species of Indonesian “stink badgers” and ten American skunks, together known as “skunks” in the Old World.

Read on to learn fascinating facts about skunks, which are adorable and cuddlier than you may think.

The stripes on a skunk’s fur typically scare off predators. But when this fails, a skunk will attempt to frighten a predator with a complicated warning dance.

Skunks will do various intimidating actions, like pounding the ground and slamming their tails. Small-spotted skunks, for instance, perform an awkward handstand dance to avoid spraying their scent early. Spraying their scent leaves skunks defenseless until they can “reload.”

Therefore, skunks’ stripes are expertly positioned to showcase their potential to spray possible dangers. This is similar to badgers, who have stripes on their faces to highlight their sharp teeth. The researchers reasoned that doing this might keep them alive while minimizing their use of defense weapons. So, instead of needing to spray a predator, skunks find it better to terrify the predator with their stripes.

3. Skunks evolved their pungent spray as a result of their nocturnal habits

You might be wondering why skunks developed a toxic discharge as a means of defense while other species, like meerkats, depend on numerical strength. According to a 2014 study, it’s more about the time of day that the possible prey is around outside. Carnivorous bird assaults are more common on awake animals throughout the day. In the case of danger, they usually depend on a lookout to scan the skies and issue warnings.

Skunks, on the other hand, are solitary and nocturnal, making them more vulnerable to attacks on land. Their capacity to spray and shock predators are helpful in the event of an unexpected ambush.

4. Skunks are not in the same family as weasels and badgers

5. The skunk’s spray is potent

Skunk spray is flammable. However, flammability is a valid indicator of a chemical weapon made of thiols, also present in garlic and onions. This is what gives these substances their sulfur-based nature. The three low-molecular-weight thiol molecules (E)-2-butene-1-thiol, 3-methyl-1-butanethiol, and 2-quinolinemethanethiol make up most of the n-butyl mercaptan that skunks produce on their own.

Some who keep skunks as pets remove their scent glands. Although this removal doesn’t eliminate the odor, the skunk can no longer spray a target.

Interestingly, those who can keep skunks as pets are adamant about the creatures’ attraction. Skunk owners claim that, like every dog or cat, skunks have distinct personalities. They also are intelligent and observant.

8. Skunk odor can be eliminated with chemicals

If you or your dog is unfortunate enough to be sprayed by a skunk, the stench won’t go away with only soap and water. Contrary to popular belief, soaking yourself or your dog in tomato juice won’t remove the smell. All that tomato juice will do is disguise it. That would even only work for those experiencing “olfactory exhaustion” from exposure to skunk spray.

To eliminate the stench, you must change the thiols’ chemical structure, which may be done quickly and affordably using hydrogen peroxide and baking soda solution.

9. A skunk in a cartoon-inspired the character of Captain Jack Sparrow

The skunk character in the “Looney Tunes” cartoon inspired a character in the “Pirates of the Caribbean.” As Johnny Depp admitted in 2003, he partly modeled an amorous skunk called Pepé Le Pew on his character, Jack Sparrow. Johnny Depp remarked that he pictured Captain Jack Sparrow from Pirates of the Caribbean as a cross between Keith Richards and Pepé Le Pew.

10. Some individuals have no sense of a skunk’s smell at all

One in a thousand people cannot detect skunk spray. An individual who cannot smell generally is said to have congenital anosmia. However, some people can smell other things, but they cannot smell a skunk’s odor at all. This inability to smell, called specific anosmia, is only related to a specific smell. Insensitivity to a specific smell is more prevalent than congenital anosmia. 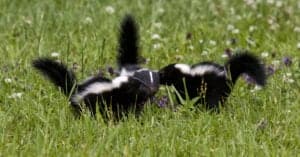