One will stand on guard to watch for predators!

The Meerkat (also known as the Suricate) is a small species of foraging mammal that is found inhabiting the harsh conditions of the open and arid, semi-desert plains in southern Africa. A member of the Mongoose family, Meerkats differ from the other 35 Mongoose species in a number of ways with the biggest difference being that Meerkats are incredibly sociable animals, where most Mongooses are not (only 3 other species are known to live in groups larger than pairs). There are three different sub-species of Meerkat that are found in varying geographic locations and although they are very similar in appearance, they differ slightly in their fur coloration and markings. All however, live in highly organised communities known as gangs or bands, that rely on one another for their survival in such hostile conditions as whilst the majority of the group is out foraging for food, others stand on guard to keep a watchful eye out for approaching predators.

The Meerkat is a small sized animal that has a long and slender body with a long and light but black-tipped tail that can almost double the animal’s total length. Meerkats are sandy to light brown in colour with eight darker stripes on their back, markings on their sides (which are unique to the individual) and a lighter face and underside. They have elongated muzzles with a black nose and dark coloured bands around their eyes. Meerkats are animals with long, sharp claws on their front paws that are curved and can grow up to 2cm long and help them to both dig their burrows and to find small animals that are buried beneath the soft sand. The fur of the Meerkat has actually adapted remarkably to the differing desert conditions, not only helping to keep the animal cool during the boiling hot days, but also acting as a layer of insulation to keep it warm during the freezing-cold winter nights.

The Meerkat is an animal found in southern and western Africa inhabiting the dry and hostile scrub-lands of the Kalahari Desert. Spanning across five different countries in southern Africa from Angola to South Africa, Meerkats are found throughout this vast, arid region foraging for food on the ground during the day and retiring into their immense burrows in the sand at night. Conditions in the Kalahari Desert are incredibly extreme with temperatures reaching up to 40 degrees Centigrade in the summer (with a sand temperature of 70 degrees), and falling to well below zero down to -10 degrees during the bitter, winter nights. This area of Africa has an incredibly low level of annual rainfall with only a rare, small amount falling generally between January and April and after which, the Kalahari briefly transforms into a well-vegetated and life-filled region before the cooler winter months set in.

Unlike all but three other Mongoose species, the Meerkat is a highly sociable animal that inhabits territories in the desert in groups that usually contain between 10 and 30 individuals (although much larger bands are not uncommon in areas where there is an ample supply of food), and consist of three or four family units of a male and female pair, with their young. After emerging from their burrow to sunbathe in the early morning sun, the majority of the band goes off to forage for food while others either babysit the young, or act as guards. By standing upright on their hind legs and tails on the top of mounds and in bushes, Meerkat guards are able to have a good vantage point to watch out for approaching predators, particularly from the sky. One of a series of different alarm calls will then be sounded to alert the rest of the group what the danger is, often causing the whole band to dive into their underground burrow to hide.

Although there may be a number of breeding pairs in one band, Meerkat society is generally dominated by one male and female pair. Young Meerkats are usually born in November after a gestation period that lasts for around 11 weeks. Having mated with her partner at the start of the summer, the female Meerkat gives birth to between 2 and 5 small kits in a grass-lined chamber in the burrow, that are born blind and without their full coat of fur. Unlike with the rearing of numerous other small mammal species, both females and males tend to their young with males and siblings known to help to teach the young Meerkats the skills of surviving in the surrounding desert. Whilst the majority of the band is out foraging for food, the young Meerkats never stray far from the den and whilst playing in the hot sand, are kept a watchful eye on by an appointed babysitter. Meerkats can live for up to 10 years in the wild but have been known to live for longer in captivity.

The Meerkat is a carnivorous animal which means that despite its small size, it only forages for and eats small animals in order to gain all of the nutrition (and most of the moisture) that is needs to survive. Like other Mongoose species, Meerkats have an excellent sense of smell which is used to sniff out potential prey that is lurking just under the surface of the sand. Once detected, Meerkats then used their long and sharp front claws to dig out their prey, with the majority of their diet being made up of insects and other small invertebrates, along with also eating larger animals such as Lizards and Rodents. Due to the fact that Meerkats are small in size and have adapted to living in such a harsh environment, they must spend a great deal of their waking hours foraging for food as they are known to loose around 5% of their body-weight during the night and must therefore ensure that they have enough to eat every day.

Due to the small size of the Meerkat, they are natural prey to numerous animal species that are both on the ground and in the air. The biggest threat to Meerkats are Birds of Prey such as Hawks and Eagles that can spot these animals from high above their heads, along with ground-dwelling predators such as Snakes that hunt them on the ground. In order to try and protect themselves from being so vulnerable in their open and arid surroundings, Meerkats adopt the safety in numbers tactic and ensure that there is always an individual on guard to warn the rest of the group of any approaching danger. In places that are closer to growing Human settlements and near to areas where domestic animals are grazed, Meerkats have been known to contract both bovine diseases and rabies that can affect whole populations of these adaptable and otherwise resilient animals.

If the individual Meerkat on guard spots approaching danger they will sound the alarm to the rest of the group. Meerkats are known to use a wide range of vocal calls to communicate between one another sounding long howls to warn the rest of the band of an approaching bird of prey, and using short double-barks to alert them of a predator nearing the group on the ground. The individual territory of a Meerkat group covers a large enough area to ensure that the band has everything they need to most successfully survive. This includes areas of both hard and soft sand as although the hard sand provides the perfect ground for building their tunnels in, it requires more energy for Meerkats to forage for food in it too. Digging in the softer sand requires less effort and therefore means that they can conserve more energy for other activities.

The Meerkat is one of those species that has always fascinated people with their characteristic behaviours having made them one of Africa’s most iconic small mammal species. The real delights into Meerkat life were displayed in the BBC series Meerkat Manor which involved the following and filming of one band of Meerkats in the Kalahari Desert. Although they are not threatened by Human activity as drastically as a number of Africa’s other unique species, Meerkats have been susceptible to contracting diseases from other animals which can have devastating implications on local populations.

Today, the Meerkat is an animal that listed by the IUCN as being of Least Concern from being extinct in its natural environment in the near future. Although they are widespread and common throughout much of their natural range, populations in certain areas can be affected by the lack of rainfall or increasing numbers of their natural predators. Populations across southern Africa however, appear to be generally stable with large numbers of Meerkats also found in a few of the big national parks.

Click through all of our Meerkat images in the gallery. 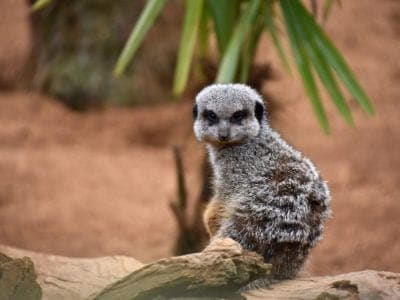 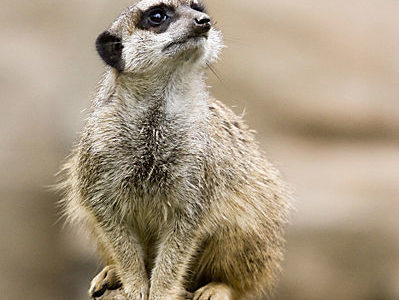 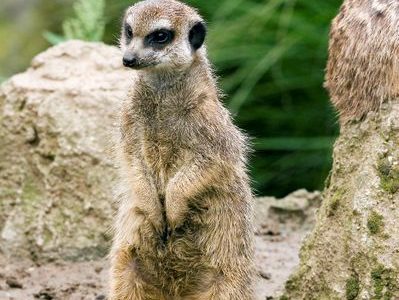 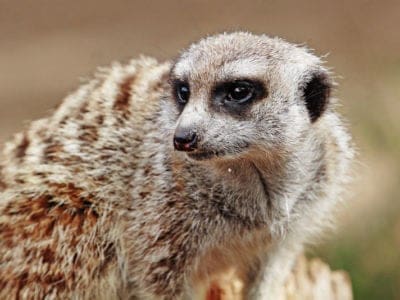 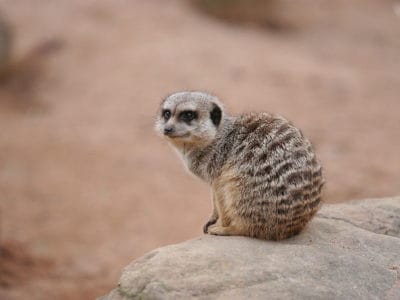 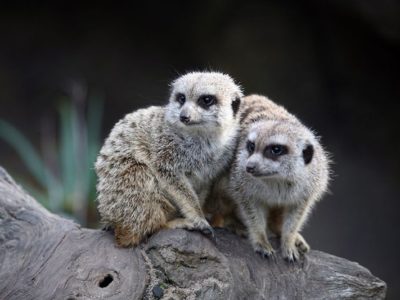 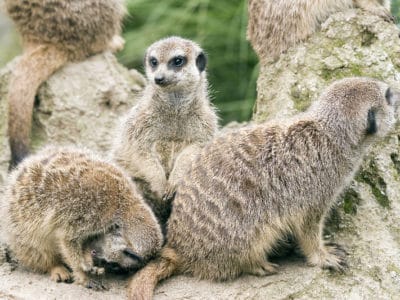 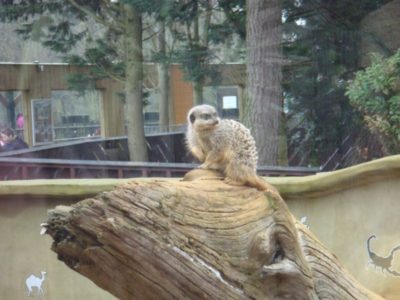 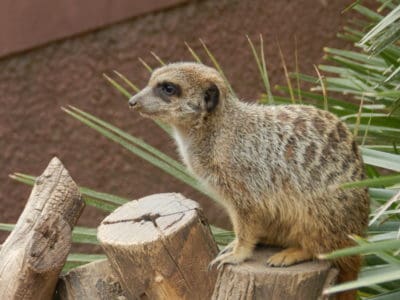 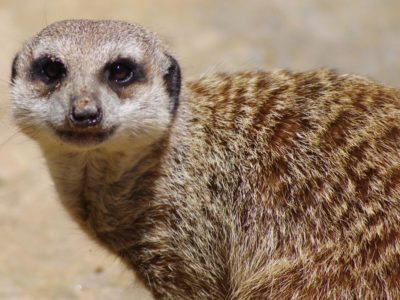 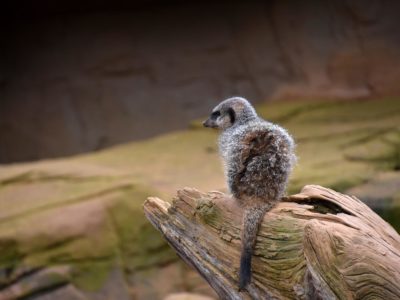 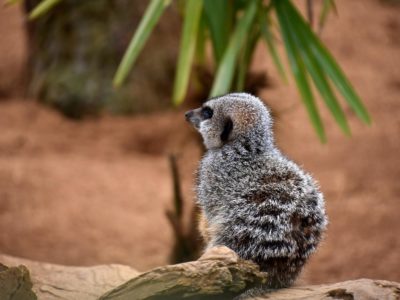 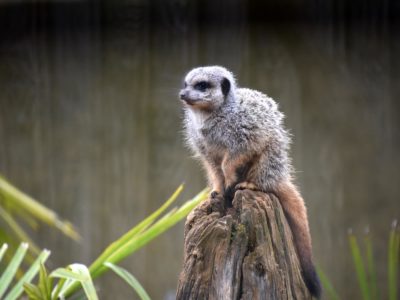 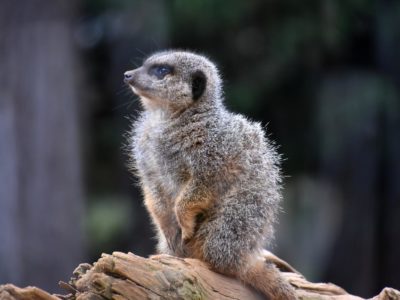 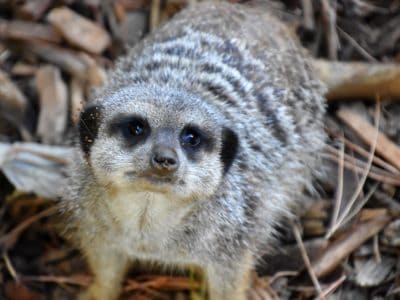 View all of the Meerkat images!

Are Meerkats herbivores, carnivores, or omnivores?

Meerkats are Carnivores, meaning they eat other animals.

What Kingdom do Meerkats belong to?

Meerkats belong to the Kingdom Animalia.

What class do Meerkats belong to?

Meerkats belong to the class Mammalia.

What phylum to Meerkats belong to?

Meerkats belong to the phylum Chordata.

What family do Meerkats belong to?

Meerkats belong to the family Herpestidae.

What order do Meerkats belong to?

Meerkats belong to the order Carnivora.

What type of covering do Meerkats have?

Meerkats are covered in Fur.

What genus do Meerkats belong to?

Meerkats belong to the genus Suricata.

Where do Meerkats live?

In what type of habitat do Meerkats live?

Meerkats live in semi-desert and scrub-lands.

What are some predators of Meerkats?

Predators of Meerkats include hawks, jackals, and snakes.

How many babies do Meerkats have?

The average number of babies a Meerkat has is 3.

What is an interesting fact about Meerkats?

One Meerkat will stand on guard to watch for predators!

What is the scientific name for the Meerkat?

The scientific name for the Meerkat is Suricata suricatta.

What is the lifespan of a Meerkat?

What is a baby Meerkat called?

A baby Meerkat is called a kit.

How many species of Meerkat are there?

There are 3 species of Meerkat.

What is the biggest threat to the Meerkat?

The biggest threat to the Meerkat is climate change.

What is another name for the Meerkat?

The Meerkat is also called the suricate.

How fast is a Meerkat?

A Meerkat can travel at speeds of up to 20 miles per hour.