When people think of Oklahoma, they often think of football, agriculture, or oil. That said, many people also think of its natural wonders and ecological diversity, including arid plains, subtropical forests, and mountains. The Sooner State is also home to many plants and animals, such as porcupines and jackrabbits. You can also find many kinds of spiders in the state ranging from giant tarantulas to tiny jumping spiders. Here is a list of 10 spiders in Oklahoma that you can commonly find in The Sooner State.

Hentz’s orb weaver, Neoscona crucifera, belongs to the orb weaver family Araneidae. It’s named after the well-known French arachnologist Nicholas Hentz but also goes by the names spotted orb weaver and barn spider. You can find these spiders throughout much of the United States.

Hentz’s orb weavers make large, radial-style webs to catch their prey. While generally nocturnal, females may stay awake during the day to repair their webs. They rarely bite people and their venom poses no significant danger to humans.

Adult females measure between 8 and 13 millimeters long, and males measure from 4 to 6 millimeters long. While both sexes possess long, curved legs, their similarities end there. Females look primarily glossy black except for a distinctive red hourglass-shaped marking on the top of the abdomen. Meanwhile, males look purple or greyish-black.

Female southern black widows construct irregular cobwebs that they use to catch their prey. Additionally, females will occasionally cannibalize the males before or after mating. They possess potent neurotoxic venom that can cause a range of symptoms including muscle aches, nausea, and respiratory issues.

The rabid wolf spider, Rabidosa rabida, possesses one of the most terrifying names of all the spiders in Oklahoma. A member of the wolf spider family Lycosidae, this large spider ranges throughout the eastern half of the United States.

Rabid wolf spiders are active hunters that do not make webs to capture their prey. They typically ambush or chase their prey with sporadic bursts of movement. Their erratic movements make them appear rabid, hence their name. Despite their large size and terrifying name, their bite is not medically significant.

Adult specimens range from 5 to 9 millimeters long, with females generally measuring longer than males. They vary in color from pale yellow to white to green or brown. That said, the abdomen typically appears lighter in color than the cephalothorax. They possess distinctively long legs, hence their name.

Long-legged sac spiders construct silk shelters shaped like a tent that they use to hide from predators. However, they leave their silken retreats at night to actively hunt for food. They typically ambush their prey but can also use their long legs to move quickly if necessary. While not medically significant, their bite can be painful.

Adult females measure between 3 and 6 millimeters long. Meanwhile, males typically measure only slightly smaller than females. The cephalothorax appears brownish-orange, while the legs look yellow and possess a covering of tiny hairs. They get their name from the purplish-brown zigzag marking that runs down the middle of the abdomen.

Triangulate cobweb spiders build irregularly-shaped cobwebs that they use to catch prey. Given their poor eyesight, they rely on sensing vibrations to know when insects stumble into their webs. Their bite is not medically significant. Additionally, many people count them among the beneficial spiders in Oklahoma since they often prey on more dangerous spiders like brown recluses.

The dimorphic jumper, Maevia inclemens, is a member of the jumping spider family Salticidae. You can find these spiders in Oklahoma and throughout much of the eastern half of North America.

Female dimorphic jumpers range from 6.5 to 10 millimeters long, and males measure between 5 and 7 millimeters long. The females feature a white face and two black or red lines down the abdomen. Meanwhile, males come in two different morphs, or varieties, which is where they get their name. The first morph looks black with white legs, while the second morph has a grey abdomen with orange markings and black and white-striped legs.

Dimorphic jumpers actively hunt for food instead of making webs to catch their prey. They hunt by leaping from far away onto their prey and then delivering a killing bite. While they are prolific hunters, their bite poses no danger to humans.

Dysdera crocata goes by many other names, including the woodlouse spider, pillbug hunter, and sowbug killer. It belongs to the family Dysderidae and ranges throughout most of the world.

Adult females usually measure between 11 and 15 millimeters long while males measure 9 to 10 millimeters long. Unlike most spiders, they possess 6 instead of 8 eyes and feature uncommonly large chelicerae or mouthparts. The legs and bodies look primarily orangish-red, and the abdomen appears yellowish-brown or grey.

You can find these spiders in Oklahoma if you look under bricks, logs, or other places where woodlice frequently roam. They get their name from the fact that they primarily hunt woodlice, although they also prey on other insects and spiders. Their powerful jaws can pierce through a woodlouse’s tough exoskeleton but pose little threat to humans other than moderate pain.

The Texas brown tarantula, Aphonopelma hentzi, belongs to the tarantula family Theraphosidae. It also goes by several other names, including the Oklahoma brown tarantula or Missouri tarantula. This large arachnid is easily one of the largest spiders in Oklahoma and throughout its range, covering the southern United States and Mexico.

Adult specimens can reach nearly 4 inches long with their legs extended, with females typically measuring larger than males. They appear primarily dark brown but come in a variety of hues from light to dark. The colors tend to look more distinct shortly after they molt.

Texas brown tarantulas use webs to help support the structure of their burrows but not for catching prey. Given their docile nature, they make popular pets, and females can live for up to 40 years in captivity. While their bite can be painful, they otherwise pose little threat to humans.

Peucetia viridans is more commonly known as the green lynx spider. A member of the family Osyopidae, it ranks as the largest of the lynx spiders in Oklahoma. Outside of The Buckeye State, you can find it all around the southern United States and as far south as Venezuela.

Green lynx spiders do not use webs to catch prey and instead wander around searching for food. Their bright green color helps them blend with their surroundings and aids them in ambushing insects such as moths that feed on crops. Many people see them as beneficial, given their penchant for feasting on garden pests.

The star-bellied orb weaver, Acanthepeira stellata, is one of the most unusual-looking spiders in Oklahoma. A member of the Araneidae family, you can find this oddly-shaped spider throughout much of North America.

Female star-bellied orb weavers range between 7 and 15 millimeters long. Meanwhile, males typically measure from 5 to 8 millimeters in length. While they usually appear light or dark brown, they come in a wide range of hues. The abdomen features 10 or 12 sharp points and faintly resembles the shape of a star, hence their name. Furthermore, some of their eyes rest on top of these points.

Star-bellied orb weavers construct wheel-shaped webs that they use to capture prey. Their webs aren’t as large as some other orb weavers, as they typically only measure between 6 and 10 inches wide. They rarely act aggressively toward humans, and their bite is not medically significant.

Elk vs Mule Deer: What Are The Differences? 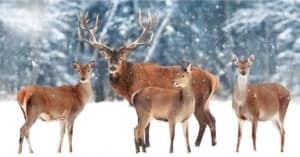