Oklahoma’s humid subtropical climate and different geographic zones allow it to have a great variety of wildlife. Because of this, there are wild creatures that range from the most common to the rarest, from the familiar to the strange, from the beautiful to the homely. Here are some of Oklahoma’s wild animals and where they can be found:

The Official Animal of Oklahoma

The official state animal of Oklahoma is the American bison. This is ironic as the bison were nearly hunted into extinction in the 19th century.

This deer, which is so numerous that it’s considered a pest in some places, is a favorite of hunters.

This pretty, insectivorous bird is identified by its very long, forked tail.

This bird is one of the most common hawks in North America and can be found in many habitats, from farms and forests to cities.

The wild turkey was once in the running to be the national bird of the United States. Like the white-tailed deer, it is a favorite of hunters.

This fast-flying, high-flying little bat is one of the most common bats in the Americas. It can form colonies of tens of thousands of individuals.

This colorful lizard is named for the bands of black around its neck. Males are rainbow-colored.

The bullfrog is common in Oklahoma’s lakes, ponds, and swamps.

The males of this large, beautiful butterfly are mostly velvety black with blue, red, and yellow spots on the hind wings. The wings of the females are bluer.

Known for its industriousness, this insect is a crucial pollinator of food crops.

Where To Find The Top Wild Animals in Oklahoma

Though few animals are actually confined to Oklahoma’s wildlife and nature areas, they are the best places to see the larger creatures such as bison. Some of these places also allow hunting and fishing.

Visitors to these and other areas in the state can also find:

Insects are of course the most common type of animal in Oklahoma as they are the most common animals just about everywhere. Besides its many varieties of butterflies and moths, the state is home to honeybees, which are the state insect, wasps, hornets, beetles, and true bugs. It also has cockroaches, cicadas and cicada killers, grasshoppers, katydids, dragon and damselflies, weevils, ants, termites, and fireflies.

Other arthropods include crab spiders, wolf spiders, black widows, brown recluse spiders, orb weavers, and cat-faced spiders, tarantulas, ticks, millipedes and centipedes, and the striped centroides scorpion. There are also crayfish, including the Delaware County Cave crayfish. This is one of the rarest crayfish as it’s only found in three caves in the aforementioned county.

Reptiles of Oklahoma include the common alligator. Alligators are actually native to Oklahoma but uncommon. They are mostly found in the Little and Red Rivers and their tributaries down in the state’s southeastern corner.

Other reptiles found in Oklahoma are skinks and other lizards, including the colorful collared lizard and the Texas horned lizard, a creature with a strange habit of spurting blood out of its eyes when it’s upset. The western slender glass lizard is legless and looks just like a snake but is not. You can tell because it has eyelids and earholes.

Turtles include the three-toed box turtle, the stinkpot, and the snapping turtle. Among the great variety of snakes are the speckled kingsnake, the western worm snake, the rough green snake, coachwhips, racers, milk snakes, garter snakes, and bull snakes. Oklahoma also has a good number of venomous snakes including the copperhead, the cottonmouth, and several species of rattlesnake.

Because they require lots of moisture, amphibians are mostly found in eastern Oklahoma. One of the rarest and most unusual is the three-toed amphiuma, which looks like an eel but is actually a 30-inch long nocturnal salamander. It appears legless at first but has legs that are so tiny that it can’t support the animal’s weight. Because of that, amphiuma is aquatic. Another strange amphibian is the siren, another eel-like nocturnal creature that spends the day in the muddy bottoms of torpid streams. More familiar amphibians include species of salamanders, toads, and frogs including the Kiamichi slimy salamander, the bird-voiced tree frog, and the Cajun chorus frog.

Oklahoma is a landlocked state, but it is known for the bounty found in its rivers and lakes. There are more than 177 types of fish in Oklahoma, and they include bass, shiners, chubs, gars, sturgeons, shads, minnows, buffalos, darters, madtoms, catfish, sunfish, perch, and trout. Both the rainbow trout and the brown trout were introduced and aren’t native to the state.

Examples of these mostly nocturnal animals, the only mammals capable of true flight, are the little brown bat, the hoary bat, the western and eastern pipistrelle, the Seminole bat, and the Yuma myotis.

Some of the most common creatures in Oklahoma are rodents. Besides the ubiquitous house mouse, mice include the hispid pocket mouse, the plains pocket mouse, and the meadow jumping mouse. Other rodents are kangaroo rats, woodrats, brown rats, and black rats. Voles, squirrels, chipmunks, ground squirrels, prairie dogs, and groundhogs call Oklahoma home. Larger rodents are the North American beaver and the North American porcupine as well as gophers and nutria, and introduced large rodent that has become invasive in some areas. The marsupial Virginia opossum is also found in Oklahoma.

Small mammals found in the refuge, parks, farms, pastures, and sometimes backyards of Oklahoma are rabbits including the eastern cottontail and the swamp rabbit. Others are armadillos, skunks, raccoons, weasels and ferrets, the American mink, and the American badger. The ringtail cat, a nocturnal cousin of the raccoon, can also be spotted in the canyons and other rocky areas of Oklahoma. There are several species of shrews and moles.

Among the large mammals that live in Oklahoma are the American bison and the plains bison. Deer are the white-tailed deer, the mule deer, and the elk. Pronghorn antelope are found in the prairies of the panhandle, and hunters seek out the wild boar.

Many birds come to Oklahoma to spend the winter or to raise a family before they move on. Other birds are permanent residents. Many of these birds are waterfowl and include swans, geese, ducks, cranes, stilts, avocets, gallinules, pelicans, storks, and coots. Though sandpipers, curlews, godwits, and knots are considered shorebirds, the ranges of these birds include Oklahoma. Even seabirds such as gulls, terns, and skuas overwinter in Oklahoma. They can be found near lakes and rivers as well as trash dumps.

Songbirds of Oklahoma include the blue and rose-breasted grosbeak, buntings, cardinals, tanagers, and a cardinal relative called the pyrrhuloxia, whose female is blue instead of red. Other birds are warblers, wrens, starlings, orioles, blackbirds, crows, ravens, grackles, and meadowlarks, sparrows and juncos, finch, and thrushes, including the robin and all three species of bluebird. There are also waxwings, thrashers, nuthatches, hummingbirds and woodpeckers, swallows, jays, chickadees, shrikes, vireos, and flycatchers. Birds of prey include ospreys, eagles, kites, falcons, hawks, vultures, and owls.

Oklahoma does have its share of predators. Besides the birds of prey mentioned, there are the common alligator and other reptiles. The bobcat is the only largish cat left in Oklahoma after the extirpation of the cougar, as the coyote and the gray, red, and swift foxes have taken the place of the gray and Great Plains wolf. The former has been extirpated from Oklahoma while the latter is extinct. The American black bear is Oklahoma’s other large predator. Smaller predators include bats, amphibians, certain fish, and shrews. The armadillo preys mostly on insects but will eat other small animals if it must.

Those who don’t want to trek into the wilderness to see Oklahoma’s wild creatures can always visit its zoos, with its displays of beasts native and exotic. They include the Oklahoma City Zoo and Botanical Garden, the Tulsa Zoo, the Lost Creek Safari in Stillwater, the Greater Wynnewood Exotic Animal Park, and the Blue Zoo, which is an aquarium in Oklahoma City.

Other wild animals to be found in Oklahoma are the eastern or common mole, a strange-looking little beast with naked outsized hands made for digging, tiny eyes, and a long, twitching snout. The southern flying squirrel doesn’t fly but glides from tree to tree due to a membrane attached to its four legs. The little stinkpot turtle gets its name because it has glands that release a nasty odor to put off predators. The citrine forktail is a delicately beautiful damselfly.

There’s a population of this insect in the Azores that reproduces through parthenogenesis. They’re the only members of the Odonata order that does this. The loggerhead shrike, another of Oklahoma’s predatory birds, is fond of killing prey by twisting its neck around then skewering it on barbed wire or thorns.

The Most Dangerous Animals In Oklahoma Today

Most of the truly dangerous animals, such as the grizzly bear, were extirpated from Oklahoma a while ago, so there are few animals that are really dangerous to humans. They are:

A few of the endangered animals in Oklahoma are:

What animals are known in Oklahoma?

Animals that are known in Oklahoma include pronghorn antelope, white-tailed deer, and the American and Plains bison.

Are there any wild animals in Oklahoma?

There are many many wild animals in Oklahoma, too many to list here.

Are there monkeys in Oklahoma?

Monkeys are not native to Oklahoma. The only monkeys in Oklahoma are found in zoos.

What kind of predators live in Oklahoma?

Oklahoma’s predators include several species of birds, including eagles, owls and hawks, coyotes, foxes, and bobcats. Many small animals can also be considered predatory, including insects such as the ambush bug.

Shark Eyes: Everything You Need To Know 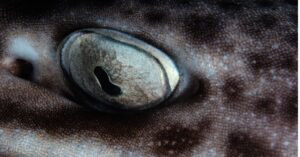