Written by Hailey Pruett
Updated: October 10, 2022
© RLS Photo/Shutterstock.com
Share this post on:
More Great Content:
How Old Is the World's Oldest Turtle?…
What Do Tortoises Eat? 20+ Foods That…
River Monsters: Discover the Largest Turtles Ever…
Where Do Turtles Go in the Winter?
What Do Snapping Turtles Eat?
The lifespan of a Tortoise: How Long…

Michigan’s chilly climate doesn’t seem like it’d be hospitable to a substantial reptile population, but there are actually 10 species of turtles that call the Great Lake State their home. From massive snapping turtles to tiny pond turtles, Michigan’s shelled reptiles are surprisingly diverse. Below, we’ll highlight five of Michigan’s most incredible Testudines and what makes them unique.

The wood turtle is no stranger to cold weather. In fact, its geographic range covers much of northern Michigan as well as most of the northeastern United States and parts of southern Canada! The species is highly mobile, often wandering hundreds of feet each day across its habitat in search of food and basking spots.

Modest in size, this little turtle typically reaches around 6 to 9 inches in total body length. Most of the turtle’s skin and top portion of its somewhat flat shell, the carapace, range in color from gray to dark brown. The scutes, or individual scales, on the turtle’s carapace are distinctly pyramid-shaped. Its underside, however, is a more vibrant yellow or orange shade with irregular patches of tan and brown.

Notably, male wood turtles are larger than females of the species on average. They also have larger claws, longer tails, and a slightly taller shell by comparison.

During the warmer months of the year, you can frequently find wood turtles in a wide range of habitats. This includes ponds, slow-moving streams, and forests. They spend a lot more time on land in the spring and summer, while they usually wait out the harsh winter months brumating in water that sits just above freezing! Fortunately, the wood turtle is more than hardy enough to withstand Michigan’s frigid winters.

The Blanding’s turtle is another impressive reptile that can survive and even thrive in cold, wet weather! Its geographic range covers virtually all of Michigan and extends north into parts of New England and southern Canada. The species’ namesake can be attributed to American naturalist Dr. William Blanding.

Fairly small, the Blanding’s turtle averages around 8 to 10 inches in total body length. While the majority of its skin is a drab grayish brown, the underside of the turtle’s chin and neck is a vibrant, sunny yellow. Its skin and carapace are mostly dark brown, though they are both flecked with tiny yellow markings. It also has a somewhat hinged plastron (the underside of the shell) similar to those of box turtles, which it can use to shut itself into its shell for self-defense.

As a semiaquatic species, the Blanding’s turtle spends much of its life near wetlands and bodies of water like muddy ponds and slow-moving streams. It will occasionally wander from these bodies of water when nesting.

During the warmer spring and summer months, Blanding’s turtles spend much of their time basking on rocks and logs. However, in the winter, they will locate a body of water just above freezing in which to brumate safely until temperatures warm back up. As omnivores, they aren’t picky and will feed on vegetation, crustaceans, insects, and fish.

Amazingly, the Blanding’s turtle is a negligibly senescent species, meaning they show very little signs of aging or age-related decline! Many individuals of the species have been recorded living well into their 70s, 80s, and beyond. They can even mate and successfully reproduce well into their golden years!

The northern map turtle, also known as the common map turtle, is certainly one of Michigan’s most colorful turtle species.

It gets its common name from the handsome green, orange, yellow, and brown markings on its carapace, which look a lot like contour lines on a map! These markings are vibrant on hatchlings, though they fade slightly with age. This makes it fairly easy to determine an individual’s approximate age. The turtle’s skin is similarly bold: a deep, emerald green with thin yellow striping throughout.

This species’ geographic range covers much of central and southern Michigan and even extends upward into southern Canada. They are semiaquatic and reside mainly in and near small, slow-moving bodies of water like streams and rivers. As a carnivorous species, they feed chiefly on mollusks, insects, and crayfish.

In terms of size, male and female northern map turtles are very different. Adult males of the species are usually a mere 4 to 7 inches long. Meanwhile, adult female map turtles commonly reach upwards of 9 to 11 inches in total body length.

During the spring and summer, northern map turtles spend much of their time basking on logs and rocks. To survive Michigan’s harsh winters, they brumate in bodies of water just above freezing, passively absorbing every bit of oxygen they can! It is common for map turtles to hibernate in large groups.

The prehistoric-looking snapping turtles are extremely hardy, meaning they are perfectly comfortable and at home in Michigan despite the state’s harsh weather! These absolutely enormous freshwater turtles can be found throughout Michigan, as well as much of the eastern and Midwestern United States.

Ranging from 9 to 18 inches in length and weighing upwards of 10 pounds, common snapping turtles are one of the largest freshwater turtle species on the planet! The “serpentina” part of their scientific name refers to their long, flexible, snake-like neck. Combined with their sharp, powerful beak, the species is a fierce predator, commonly feeding on virtually anything they can fit into their mouth.

In addition to being near the top of its food chain, the snapping turtle has few natural predators. This is in part thanks to its rugged, thick carapace and long, sharp claws that it can rely on for self-defense.

You can find snapping turtles in a wide range of habitats–though it’s best to admire them from a safe distance due to their aggressive nature. Usually, they prefer to inhabit muddy ponds and streams, where they occasionally bask on upturned logs and rocks. During the winter, they can submerge themselves in water and hibernate without actively breathing for months at a time! Instead, they passively absorb oxygen through their mouth and throat membranes.

The last species we’ll highlight here are the truly bizarre spiny softshell turtles, of which there are currently six total subspecies. They collectively inhabit much of the American Midwest, with their range extending from as far south as Texas all the way up to northern Michigan, Minnesota, and Wisconsin. In Michigan, the northern variety, Apalone spinifera spinifera, is the most common and widespread.

The northern spiny softshell turtle has a unique appearance thanks to its smooth, flat shell and long snout. In this particular subspecies, the carapace is olive green with tiny dark brown or black spots throughout. The carapace is soft and leathery and completely lacks hard scutes or individual scales. Its snout is elongated and functions like a snorkel, allowing the turtle to submerge its body in water entirely, leaving only its nostrils above water.

The overall size of a northern spiny softshell turtle depends largely on its sex. Females of the subspecies are much larger on average than males. While females can reach up to 20 inches long, males usually max out at around 8 to 10 inches. Both sexes can possess spines along their carapace, but males possess them more often than females.

In addition to being hardy enough to survive a wide range of habitats, the northern spiny softshell turtle is capable of breathing underwater! It most commonly inhabits shallow, slow-moving bodies of water like ponds and streams. However, it typically migrates seasonally, residing in slightly warmer areas in the winter and cooler regions in the summer. 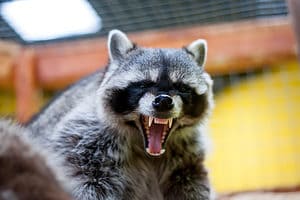