Are Foxes Dangerous To Humans?

Written by Hannah Ward
Published: December 24, 2021
Share this post on:
More Great Content:
Fox vs Coyote - The 5 Key…
Why Do Foxes Scream At Night?
Fox Poop: What Does Fox Scat Look…
What Do Red Foxes Eat? 7 Types…
Are Foxes Canines or Felines (Or Are…
Fox vs Wolf: The Top 4 Differences…

Foxes are omnivorous mammals from the family group Canidae which includes dogs, wolves, and coyotes.   Some foxes are mistaken for wolves or coyotes which, combined with their reputation for being sly and cunning, means they’re often believed to be dangerous.  But is that right?  Join us as we discover whether foxes really are dangerous to humans.

When are Foxes most Active?

When we’re examining whether foxes are dangerous to humans we first need to understand how often they are likely to be around us and what their first instincts are.  Many foxes are nocturnal or crepuscular. This means that they’re most active around dawn and dusk (the twilight hours) and during the night.  So, although some fox species do hunt during the day, more often than not foxes are out and about when we’re not.  In fact, if you do see a fox during the daylight hours it’s more likely to be young fox cubs that are beginning to explore the great outdoors.

Many animals have a fight or flight response that is a natural reaction to any form of threat.  Despite being opportunistic predators, foxes are actually flight animals.  This means that they are more likely to flee in the face of adversity than to stand their ground.  Foxes have a natural fear of humans and will usually run away as soon as they detect our presence.  This is because in most cases foxes are far more scared of us than we are of them.

Foxes are opportunistic predators and eat (as well as fruit and berries) a range of insects, birds, and small mammals such as rodents.  Predators of foxes are generally bigger than them.  Depending on the fox species their predators can be polar bears, leopards, bears, wolves, plus many more.  However, one of their main predators is actually us humans.  We’ve been hunting them for centuries for fur and because in many countries they’re seen as a pest because they prey on livestock.  This gives foxes a pretty good reason to be scared of us.  Just like they do with any other predator, foxes generally try to stay out of our way, and when they do encounter us they’re more likely to run off.

Are Foxes Dangerous to Humans?

Foxes have long had a reputation for being sly and cunning and ruthless killers.  The phrase “fox in a hen house” has often fuelled this thought.  However, foxes are not considered to be dangerous to humans.  As we’ve already established, most of the time foxes are out and about during darkness, and even when they do encounter us they’re more likely to run away.  Foxes generally only prey on small animals, so they’re not interested in us in that sense. Foxes are actually considered to be one of the least aggressive wild mammals that we can encounter.  So, despite what people often think they’re pretty harmless and are unlikely to attack a human for no reason.  In fact, the general rule is that if we don’t bother them then foxes won’t bother us.

Despite this, there are rare occasions when foxes can bite people.  However, foxes are generally only dangerous if they’re trapped, cornered, injured, or sick.  In these cases fear and adrenaline change their behavior. However, they will usually only bite as a form of self defense to protect themselves or their young.

Foxes, like any wild animal, can carry a range of parasites and diseases – such as worms, fleas, and mange (mites).  However, there’s still not much threat to humans, unless you are unlucky enough to be bitten by one.  In these cases a medical check up and a tetanus injection might be required.

The only real exception to the rule of when foxes are likely to be dangerous is if they are rabid, although again this is quite rare.  Although foxes are a primary carrier of rabies in the US, they carry less rabies than raccoons or skunks.  The main signs that a fox has got rabies are –

If a fox is showing signs of being rabid then it’s important to stay away from it and call the appropriate animal control department.

There is a growing number of urban foxes in our towns and cities, which in turn leads to more people putting out food for foxes.  Although foxes are not particularly dangerous to humans, this can lead to potentially dangerous behavior.  This is because it can cause foxes to lose their natural fear of humans (their flight response). It can also cause them to rely on us or associate us with food.  If foxes begin to associate us with food then they can begin to go up to people expecting to be fed instead of foraging and hunting for their own food.  This also leads to people trying to hand feed foxes. Both of these cause a much bigger risk of someone being bitten by a fox.

What to do if you Encounter a Fox

If you do encounter a fox then most of the time it will run away.  However, if it doesn’t run off then the important thing is to remain calm. Make sure that you aren’t making it feel threatened or cornered in any way.  If it is cornered then back away slowly and steadily so that it has an escape route and feels free enough to run off.

However, if you’re a safe enough distance away and the fox is just carrying on with it’s own business then it’s a good opportunity to stand back and just enjoy the sight of one of the world’s wonderful animals. 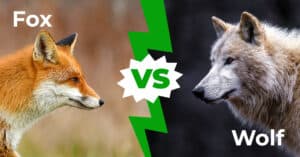 Fox vs Wolf: The Top 4 Differences of the Grey and Red Canids of the Northern Hemisphere