Foxes are omnivorous mammals that live on every continent except Antarctica.  They are highly adaptable and live in a range of different habitats – from deserts to mountainous regions.  Foxes are opportunistic predators and rely on their stealth and cunning when hunting and there is no denying that they are masters at it.  But when are foxes most active?  It’s often simply assumed that they are nocturnal, but if that’s the case then why do we sometimes see them during the day or early evening?  Join us as we delve into the behavior of foxes and discover whether they truly are nocturnal.

Most fox species are nocturnal, but not all are. Fox species will be most active at night if their prey is active the or habitats (such as deserts) require it.

Nocturnal behavior is when animals are active through the night and sleep during the day.  There are many animals that are nocturnal – such as badgers, coyotes, owls, rats, hedgehogs, leopards, and some insects.  There are twelve species of true foxes (genus Vulpes) and around 25 other species which are known as foxes or “false foxes” due to their close resemblance to true foxes.

Advantages of Foxes Being Nocturnal

For the foxes that are nocturnal, there are plenty of advantages that come with it.  One of the main advantages is being able to avoid predators.  Foxes, like many animals, have predators, and these vary between the different species of fox.  It’s a lot easier to remain hidden from a predator under the cover of darkness than it is out in the daylight when they are most exposed.  Therefore, for nocturnal foxes daytime is usually spent sleeping in the safety of their den.

Hunting is often easier at night as it’s far easier to move around stealthily in the dark.  Foxes have perfected the ability to move around virtually undetected and their highly adapted senses mean that darkness doesn’t hinder them the slightest.  They have acute hearing and an incredible sense of smell.  Once a fox has detected its prey they can usually pinpoint the exact location and swiftly pounce.  Additionally, there is often less competition when hunting at night.

What is Crepuscular Behavior?

Sometimes foxes are not fully nocturnal but instead are most active at dawn and dusk – the twilight hours.  This is known as being crepuscular.  Quite often people refer to animals as being nocturnal when they are actually crepuscular because they don’t realise there is a difference.

Some foxes lean towards crepuscular behavior simply because they hunt when their prey is most active.   So, if the prey in their particular location and habitat are active during the twilight hours then that is when the foxes will hunt as there is a greater chance of them catching a meal.  There are quite a lot of animals that are crepuscular that are on the menu that foxes eat.  Many insects are crepuscular, as are some birds and rodents.  Snakes and lizards, particularly in desert regions, are also more active during twilight.

As well as prey availability, human interference plays a part in whether foxes are crepuscular or nocturnal.    Studies have found that foxes are nocturnal when there is a greater chance of disturbance by humans.  However, where there is less human activity (ie in rural locations), foxes are more likely to be active during the twilight hours.

Foxes That Hunt During Daytime Hours

Foxes are also often more active during mating season and spend more time outside of their den.  At this point they usually spend at least part of the day lying above ground under tree roots or in any other place with shelter.  Not only that, but male foxes roam much more during breeding season in search of females.

At the other end of the breeding season half-grown fox cubs are far more active during the daytime in the summer.  It’s common for them to spend quite a lot of time out of the den playing or lying in the undergrowth, or even exploring as they learn to forage for themselves.  Therefore, although a lot of foxes are nocturnal, it’s not uncommon for some to be out during the day. 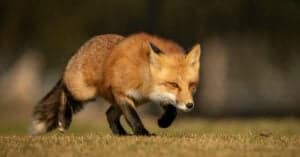