Crocodiles are probably not the first animals that come to mind when you think of the word “cute”. But we think we can make an exception for baby crocodile hatchlings. Did you know that female crocodiles can lay up to 60 eggs or that they carry their babies in their mouths?

Keep reading to learn five awesome facts and to see some adorable pictures of crocodile hatchlings.

You might be surprised to learn that even though crocodiles are well-known for their strength, most of their babies don’t live past their first birthdays. This is because there are an abundance of predators of crocodiles, including lizards, hyenas, and even other crocodiles

This infant mortality rate for crocodiles is a pretty serious problem. Some 99% of baby crocodiles are eaten before their first birthday. As a result of this and other threats, several crocodiles species are classified as endangered.

Did you know that crocodile hatchlings are called that because they hatch from eggs? It’s true! Crocodile eggs are about as large as goose eggs and are buried under sandy beaches for protection against the elements and predators. Mother crocodiles can even lay up to 60 eggs at a time!

Scientists think a major reason why crocodiles lay so many eggs is due to the infant mortality rate of the animals. Predators like raccoons, lizards, mongooses, and more especially enjoy crocodile eggs and pose a huge threat to the unborn babies. A majority of the eggs in a crocodile’s clutch will never hatch due to these factors.

When baby crocodile eggs are ready to hatch, the animals break out of their shell using a special tooth called an egg tooth. Then, they make grunting sounds from the nest to alert their mother. The mother crocodile will then tend to her babies by using her teeth to help along the hatching process and eventually will carry them to the water for their very first swimming lesson.

Fun fact: in some cultures, crocodile eggs are considered a delicacy! Imagine eating at a fancy restaurant and seeing crocodile eggs on the menu! Pretty wild, huh?

When newborn crocodiles are born, they have an egg tooth to break out of their shell. As they grow up, they will gain many more teeth, of which the number varies, depending on the type of crocodile they are. But since these fantastic animals can’t brush their teeth, evolution found another way to keep them healthy and sharp: by shedding.

Since crocodiles are primarily carnivorous creatures, they must bite down with ease on turtles, small animals, and even large prey. One of the significant ways they can do this is by a strong jaw and sharp teeth. Over time, though, since they cannot clean their teeth, they weaken and dull. This is when crocodiles must shed their teeth to grow a new pair.

When crocodiles are babies, they can shed and regrow their teeth on-demand at fast intervals. As they grow older, they must expend more and more energy to complete the process, so the shedding process slows as a result.

#4: Crocodile Babies Depend on their Mother

You’ve probably guessed that any baby animal – not just crocodiles – relies on their parents for protection as they grow up. When it comes to crocodile babies their mothers also play a unique role in helping them grow up. A mother crocodile’s job starts the moment her babies begin to hatch.

Unlike other sea animals, crocodiles cannot dig out of the nests they are buried in for their protection. Instead, they must rely on their mother to dig them out when they have hatched. They do this by making grunting sounds that alert their mother, who promptly comes to their rescue.

Mother crocodiles are unique from other female reptiles because they are known for their nurturing traits when it comes to their young. Most reptiles do not take on such an active role in raising their babies, so the bond that mother and baby crocodile hatchlings share is a special one. How cute!

#5: Mother Crocodiles Carry Their Babies in Their Mouthes

As newborns, crocodiles also cannot walk. This means that their mother must carry them around for travel. Mother crocodiles often carry their babies around in their mouths. Even though an adult crocodile’s jaw is powerful, mothers are exceedingly gentle with their babies while carrying them around.

Female crocodiles mainly use their mouths to carry their young from the nest to the water but have been also known to carry them this way for other activities.

What are baby crocodiles called?

What do baby crocodiles eat?

How big are baby crocodiles?

Baby crocodiles are typically between ten and twelve inches long and weigh about 72 grams as newborns. 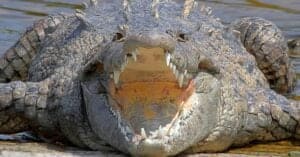