Big Guinea pigs are rodents and more specifically part of the cavy family. You won’t see them having family picnics but they’re cousins to mice, rats, squirrels, hamsters, porcupines, and more. Like the majority of rodents, the guinea pig has a robust body, shortened limbs, a large head, and short ears.

The hair of these rodents can be coarse or smooth and even silky. Color varies: tan, white, cream, chocolate brown, black, or a pattern of colors.

There are several breeds of domesticated guinea pigs, grouped by hair length and coat texture. They are large rodents. The size can be eight to 16 inches long and the weight roughly between one and three pounds. Also, unlike a lot of rodents, you cannot see their tails as they’re not external.

These creatures are all over the world with only a few species living in the wild. The wild animals are the:

Society domesticated the animals over 3,000 years ago. It started in Peru at around the same time as humankind transitioned from nomadic to an agriculturally influenced society.

How Big Are Guinea Pigs?

Compared to other rodents, the animal community categorizes the big guinea pigs breed as a large size. For example, the adult house mouse is (nose to tail) up to four inches. The size for squirrels runs about 15 inches with tails visibly taking up a large part of their length. Adult large guinea pigs can grow in length as much as 16 inches.

But as big as these animals typically get, history shows how large they have been. Let’s take a look at history’s biggest recorded big guinea pig.

Meet Goya, the Largest Guinea Pig on the Books

In May 2000, a team of Venezuelan researchers recovered fossilized bones in a South American desert called Urumaco. Uncovering the jaw, the explorers were shocked to find they had found a rodent over 10 times larger than any on record. The bones were dug at Tio Gregorio. The nearest communities referred to the region as Goya and so they gave the name to the newly found fossil.

Closer examination of the bones determined the fossil was most likely that of a guinea pig. Specifically, it was a caviomorph, a cousin to the modern cavy. The newly christened Goya the giant guinea pig belonged to Phoberomys pattersoni species.

According to the study, the researchers determined the large guinea pig fossil’s weight came in at 1,500 pounds and the estimation for its body size was approximately nine feet long. That made the guinea pig about the size of a cow or buffalo.

The animal probably grazed along the lush South American banks over eight million years ago. It’s believed at the time the Urumaco was home to giants. The region held the key to a variety of mysteries revolving around animal evolution and paleontology.

The big creature had an exceptionally long tail for hind leg balancing and large teeth that grew continuously throughout the big guinea pigs lifetime. Like the capybara — a giant cavy rodent — it was semi-aquatic and likely foraged along the riverbanks.

Of the 5,000 mammals walking the earth today, somewhere in the vicinity of 2,000 are rodents. The smallest weighs only a pound or so. The largest is the capybara family and can be between 75 and 100 pounds. The fossil hit the scale at about 1,000 pounds.

The find raised a bunch of questions about the direction and pace of evolution, as well as the economies of scale. Goya, the largest ancient guinea pig, was comfortable in the water and on dry land. It lived among turtles, huge carapaces, and catfish.

It’s believed thanks to its size and strength, the Phoberomys dealt with few enemies. Predators may have included 30-foot long crocs, carnivorous, flightless birds, and lion-sized marsupials.

The Phoberomys were previously identified from findings of isolated teeth and other bone fragments. But no other expedition imagined the immense size of the animal nor associated it with big guinea pigs. But upon realizing what mammal they were dealing with, the study turned to how these massive creatures managed their weight compared to the current creature.

Science imagines that the largest guinea pig likely used a different gait. Rodents tend to stand as if they’re on the verge of exercising, particularly as if they are about to do press-ups. That meant the hind legs bend at the knee, as you might see the mouse do. Large mammals tend to stand with their legs straight. As capybara stood like sheep, the Goya likely stood even straighter. At a distance, instead of a big guinea pigs, you might think you’re witness to a cow or buffalo.

You’d also think Goya’s size would be problematic, especially considering the amount of food it would require. Only it’s believed the size of the largest guinea pig actually helped the animal efficiently ferment plant cellulose in a vat-like gut.

The scientific community believes giant rodents died out because they were also slow and unable to escape lithe and limbed predators. Mother Nature evolved the giants into smaller rodents with short paws that could swiftly flee predators, burrow to safety and, for creatures like mice, slip through the smallest slits.

Feeding was not a problem for the rodent. It had teeth perfect for grinding abrasive foods. Like the cow, the giant guinea pig likely depended on the microorganisms in its gut for survival. Those little critters got plenty of nourishment from the grass, storing it and keeping the animal healthy.

With bigger animals, the larger the gut the more rapid the energy supply from fermenting grass. Conversely, the bigger the animal, the greater energy conserved so the less required to eat.

Do You Want One of the Largest Guinea Pigs?

If you wanted to get as close to the largest one as you could get today, you want to take a look at the Rex. Coming in at 17 inches at adulthood, it’s currently the largest breed available. Full-grown, it’s 50% larger than other species and double the size of its American cousin. They are not common in the States but you may find a breeder of the rare animal.

From the big Rex to the tiny Teddy – Guinea pigs make great pets. They live 4 – 8 years, so you can enjoy them longer than most rodents. They have unique personalities and are very vocal, making it easy to get to know them and to form strong bonds. Plus, they are lots of fun to play with and love to cuddle! 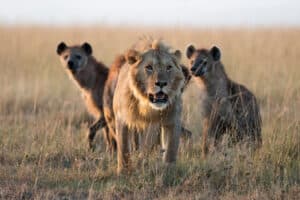