Written by Hannah Ward
Published: May 27, 2022
© Carolyn Smith1/Shutterstock.com
Share this post on:
More Great Content:
How and Where Do Possums Sleep- Everything…
Possum Lifespan: How Long Do Possums Live?
Possum Poop: What Do Possum Droppings Look…
Possum Teeth: Everything You Need to Know
Possum Location: Where Do Possums Live?
Are Possums Rodents?
↓ Continue Reading To See This Amazing Video

Possums are unique marsupials which are famed for their adorable appearance. They are distinguished by their pointed snout, ears and long tails, with many of them also having thick, bushy fur. Most possums are highly arboreal and spend much of their time in trees which they rely on for food. Although possums are generally small to medium sized animals, some species are larger than others. But just how large can they get? Join us as we discover the largest possum in the world!

Possums are marsupials that are native to Australia, New Guinea, and Indonesia. They have a pointed snout and ears and many species have thick, bushy tails. Possums are members of the order Diprotodontia. This is the largest order of marsupials and includes possums, kangaroos, wallabies, koalas, and wombats. They make up the suborder Phalangeriformes and there are currently around 70 species alive today. It should be noted that opossums – although also marsupials and commonly called possums – are not the same animal. Opossums are from the order Didelphimorphia and are endemic to the Americas. Possums are not related to opossums and are instead more closely related to the other Australian marsupials.

Like all marsupials, possums give birth to extremely underdeveloped young after only a short gestation period – usually only 16 to 18 days. The joey is then raised in the female’s pouch for up to eight months before it begins to venture out into the world. Once out of the pouch, the female usually carries the joey around on her back until it is approximately one year old.

Possums are extremely adaptable and live in a wide range of habitats such as forests, bushland, and even urban areas. They are largely nocturnal and are highly arboreal, often travelling around through the trees and nesting in hollows in them. They are particularly well suited to climbing as they have a unique adaptation which is known as “syndactyly”. This unique feature means that the second and third digits of their hind feet, the middle two, are fused together while the claws remain separate. This makes it easier for possums to climb and to hold onto branches safely. Although all possums share this feature, different species posses different unique features.

Possibly the most unique possums are gliders which have large flaps of skin between their limbs, known as a patagium. This allows them to launch themselves through the air and glide distances of up to 65 feet. Other animals that possess a patagium are flying squirrels, bats, and the extinct pterosaurs. Gliding possums use this type of locomotion to travel between trees. It is particularly useful as it allows them to move around without using much energy.  It also means that they don’t need to descend to the ground which keeps them safe from many ground-dwelling predators.

The Largest Possum in the World

The largest possum in the world is the Sulawesi bear cuscus which can reach a massive 22 pounds. They are around 24 inches long and have thick, dark fur and bushy tails that are almost the same length as their bodies. With heavy bodies and thick, dark fur it’s no surprise that they have “bear” in their name. Despite this, they are actually a possum. Sulawesi bear cuscuses are endemic to Indonesia where they predominantly live in lowland tropical rainforests on the island of Sulawesi. They are highly arboreal and spend the majority of their time in the upper canopies where they travel by swinging between the branches. Sulawesi bear cuscuses are well adapted to this lifestyle due to their long tail and long claws, both of which help them to grip the branches.

Sulawesi bear cuscuses are herbivores and eat only leaves, flowers, and occasionally fruit. However, they are sometimes described as “folivores” due to leaves making up the majority of their diet. Due to this, their diet contains only low levels of nutrients which means they typically lack energy. This leads to them moving only very slowly and spending large parts of their day asleep.

Although many other possums are solitary animals, Sulawesi bear cuscuses usually live in pairs or small groups of up to four or five individuals. Quite often these small groups include young from the previous year which have graduated out of the pouch. Once out of the pouch they remain with the mother until they become fully independent.

Unfortunately, Sulawesi bear cuscuses are a vulnerable species and their population remains in decline.  The main threat to them is actually us humans. This is due to hunting, the pet trade and deforestation, which threatens their habitat.

Are all Possums under Threat?

As we’ve already mentioned, the largest possum in the world is classed as a vulnerable species, and it’s not the only one. Although some, such as the common brushtail possum, are not under any threat, many other species are classed as being endangered or critically endangered. In fact, in Australia alone around one quarter of its possum species are threatened in some way. One of the most critically endangered possums is the western ringtail possum. This possum is locally extinct in many areas of Australia, and is now subsequently found only in small pockets of the country. The main reasons for the decline of this species is down to a combination of habitat loss due to bush fires and deforestation, and the introduction of the now invasive red fox.

Of the larger species of possums, the blue-eyed spotted cuscus (which can reach 13 pounds) is also critically endangered. Living only in small areas of Indonesia, they are so rare that they weren’t even officially recognized until 2004. Their population is declining so rapidly that recent searches have failed to find any wild individuals left on several islands that they formerly inhabited. 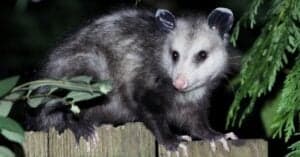