How Deep Is The Colorado River?

The “Lifeline of the Southwest,” as it is known, the Colorado River is the sixth-longest river in the U.S. It rises in the Colorado and Wyoming snowcapped mountains and provides hydroelectric power and water for about 40 million people in the United States and Mexico. Due to its purpose for so many uses, it is also considered one of the world’s most heavily regulated rivers.

Tourists sailing along the Colorado River constantly ask the Grand Canyon river guides a recurring question; “How deep is the Colorado River?” It sounds like a simple question, but the answer has always remained unknown as researchers and scientists still debate over the river’s actual depth.

For today’s article, we’re going to delve deeper into one of the most important rivers in the country and will try to discuss how deep it is as well as its history, wildlife, and other unique features.

What is the actual depth of the Colorado River?

Researchers and scientists are still trying to come up with more definitive conclusions about the Colorado River’s depth. Even the Grand Canyon river guides couldn’t come up with an answer when tourists asked them the question. When people look up the internet, the responses vary based on the year and how truthful the information is. New studies suggest more accurate solutions based on the actual depth of the river.

How long is the Colorado River?

Does the Colorado River have any unique features?

The Colorado River is best known for flowing through beautiful canyons and having whitewater rapids perfect for various activities. There is a famous spot within the river called the Horseshoe Bend, a massive piece of rock placed in the middle of the river in the shape of a horseshoe. Because of its recreational water opportunities, the Colorado River is called the “Granddaddy of rafting trips.”

What does the wildlife look like in the Colorado River?

In the environment and waters of the Colorado River, it is no surprise that it’s also home to a diverse number of species. In the Grand Canyon alone, many species of animals are already thriving in its areas. 447 species of birds, 91 mammals, 48 reptiles, 10 species of amphibians, and hundreds of invertebrates like spiders make the Grand Canyon their home.

The wildlife in the Colorado River consists of:

The beaver is the most seen and largest mammal in the Colorado River. Since the river has a forceful flow, beavers build dams along the river banks. On the other hand, muskrats may also be found building dens along the river’s shorelines. River otters were mammals that once made the river their home, but after a few disappearances already, they have moved to another habitat. Several numbers of mule deer, bighorn sheep, coyotes, bobcats, and gray foxes can also be found along the river corridors.

Even if many fish species are wiped out by its cooling water, the Colorado River still boasts several fish thriving in its chilly waters. Some of the fish include smallmouth and largemouth bass, catfish, bluegill, rainbow trout, and crappie, which are usually the ones that are caught in sports fishing. Native species of fish that can adapt to its cool waters are minnows, speckled dace, and bluehead suckers.

The Colorado River often serves as a travel corridor or habitat for many migratory birds and waterfowl, like the great blue heron, the American avocet, the American wigeon, the red-winged blackbird, the western bluebird, the burrowing owl, the Mexican spotted owl, and the southwestern willow flycatcher.

The National Park Service reports approximately 47 reptile species in the Grand Canyon, with reported sightings of reptiles within the Colorado River itself. Reptiles and amphibians that thrive in the river waters include the western painted turtle, rattlesnake, sidewinder, gopher snake, short-horned lizard, red-spotted toad, the common kingsnake, and other snakes.

What are some interesting facts about the Colorado River?

History of the Colorado River

Other Amazing Events in the History of Colorado River

Human Control of the Colorado River

The Colorado river is one of the most utilized globally because of the amount of water flowing through it, which allows it to be used for many purposes. It currently has over 40 dams, channels, and aqueducts that serve human purpose by diverting the river, irrigation, generating power, populating areas and creating attractions etc.

Here is a list of Dams on the Colorado River and the purpose they serve:

One of its most prominent sights was the Hoover Dam, built between 1931 and 1936 to control the river. The Hoover Dam provides water for Lake Mead, an artificial reservoir built to provide more water supply for Arizona, Nevada, California, and northern Mexico. It is deemed one of the world’s largest water reservoirs and is essential in maintaining industrial water and irrigation water for downstream residents to use.

The Colorado River has been under the threat of ongoing draught caused by overallocation and climate change since the 2000, when it was first observed that the Lake Mead has started to dry. It is a fact that the river has lost 20% of its water in the last century. As a result the number of trees in the basin are reducing at an alarming pace , so are the insects, birds, amphibians and fish population. Recent studies have shown that the Mojave desert has lost 43% of its native population of animals. It is also being predicted that by 2050, the temperature of Colorado River will increase by 5 degrees.

Learn about the depth of the Columbia River.

Is the Colorado River running dry?

Like many other rivers that are running dry in 2022, the Colorado River is running at lower levels than its historical average. This has led to reservoirs such as Lake Mead and Lake Powell to be at historically low levels. 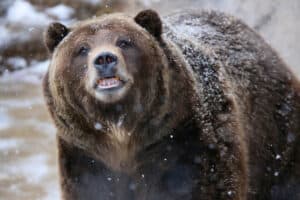