How Do Whales Die? 7 Common Causes of Death for Whales

The blue whale is the largest animal that’s ever lived on earth – it is bigger than the dinosaurs. It can live an estimated 80 to 90 years!

The bowhead whale, a somewhat smaller species, may live more than 200 years.

But eventually, life comes to an end even for these enormous amazing animals. How do whales die? Since they live in water, can they drown?

Are there predators that hunt whales?

Keep reading to find the answers to these questions and to learn how whales “live on” deep in the oceans after death.

How Do Whales Die?

Causes of whale deaths can be natural or manmade. So how do whale die? Human activities, including hunting, pollution, and injuries from massive ships can kill whales.

Other causes of death may be old age, starvation, infection, complications giving birth, or becoming beached.

1. How Do Whales Die : Ship Strikes

Adult whales often rest or swim slowly near the top of the water. With few natural predators, whales are unlikely to fearfully retreat when they see or hear a large ship on the horizon.

Just as a vehicle such as a car can injure or kill pets and wildlife, large ships pose a danger to whales. The ships may be many times larger than the whale, moving fast.

The impact may cause a concussion, internal injuries, or bleeding. If the whale survives the collision, a head injury may prevent it from feeding, or infection may set in. A sick whale is more likely to beach itself – another cause of death discussed below.

How often do ship strikes occur? By some estimates, at least 80 whales are hit by ships every year. Scientists have also used trackers to map whales’ activity in relation to ships.

One blue whale swam erratically for months around the Pacific Ocean, often turning around and changing course to avoid the busy shipping lanes that crisscross the sea.

2. How Do Whales Die : Pollution

Solid and liquid pollution from human activity poses a major threat to all aquatic animals. Fishing nets prove to be especially hazardous to whales.

Whether large or small, whales can become entangled. If they are not able to swim to the surface, they will soon drown.

Whales have also suffered from starvation when free-floating nets caught on their heads, preventing them from feeding. In some cases, the nets have cut into the flesh or cut off circulation to a fin, inviting infection.

Whales can be affected by liquid pollutants in the water or by airborne pollution. Constant exposure may result in cancerous tumors.

Some beached whales have also been observed to have bellies full of plastic waste. This can lead to poisoning or starvation, as enough indigestible matter can collect as to not allow the whale to swallow any more food.

Whether it be oil spills, marine debris, and industrial pollutants such as PCBs, or a combination of pollutants impacting their food supply, marine pollution is a serious threat to whales and other marine mammals.

3. How Do Whales Die : Beaching

Beaching occurs when whales swim into shallow water and get stuck, when they ride the waves onto a beach, or when the tide goes out, leaving the whale stranded on land or in shallow water.

The whale’s own weight, usually supported by water, can crush its organs or cause it to suffocate. The thick blubber that keeps it comfortably warm in the water can cause it to overheat on land. Dehydration and drowning in rising tides may also cause death.

Beached whales can only survive for a few hours on land. A high tide or helping hand from humans or fellow whales may help them reach deep waters once again.

Why do whales beach themselves?

Toothed whales such as orcas swim onto beaches in search of prey such as seals or penguins. Illness, injury, netting, and parasite infection have also been observed in beaching incidents.

4. How Do Whales Die : Predators

Adult whales, especially the larger baleen whales, seldom fear attacks from predators. Calves, however, may be targeted by sharks, killer whales, or even polar bears if they stray too far from their mother’s protective care.

On rare occasions, large pods of orcas have been observed hunting, killing, and eating humpback whales, gray whales, and even blue whales. In the instance of the blue whale, more than 50 orcas were involved in the chase.

The whales’ most dangerous predator, however, is humans. We’ll discuss that in detail below.

5. How Do Whales Die : Illness

Like humans and other mammals, whales can get sick. Cuts and scrapes may become infected with bacteria or parasites.

If the whale’s immune system cannot fight off the invaders, it will die.

The disease may influence whale stranding’s, as when many beluga whales infected with toxoplasmosis beached themselves near the St. Lawrence Estuary. Whales may also die of difficulties giving birth.

6. How Do Whales Die : Starvation

Many types of whales migrate in search of food, fasting for months in between feeding grounds. If the whale becomes sick or injured and it cannot swim to the feeding ground at the appropriate time, it may starve. Climate change is also an issue.

For example, humpback whales feast on vast schools of krill near Antarctica at a certain time of year. If global warming increases, the krill cycle may change. If the whales’ migration patterns do not adapt, many could die from a lack of food.

Other whales feed on schooling fish. Overfishing by humans has reduced the populations of many important fish species.

The sea waters changing and food becoming not as abundant for whales can affect starvation and cause these amazing animals to beach themselves. Another reason may be because a net gets stuck in their mouths and they can’t eat.

These reasons cause many whales to die every year.

7. How Do Whales Die: Hunting

Prolific hunting of whales for their “oil” nearly caused many species to become extinct more than a century ago. Ship crews would spot a whale near the surface and shoot it with a harpoon, a barbed metal arrow attached to a rope.

The whale might pull the boat for days until it was tired and died. As whaling decreased, some whale populations have made an astounding comeback.

Today, whaling is illegal in most parts of the world. The exceptions include Japan, Iceland, and Norway, where whales are still harvested for meat, oil, blubber, and cartilage. Over a thousand whales are killed by hunters each year.

These animals may also become victims of “bycatch,” when they are captured in nets or traps meant for various types of fish. An estimated 300,000 whales experience bycatch each year.

Some are identified and freed by responsible fishermen, while others drown, unable to reach the surface to breathe.

What Happens After Death?

When a whale dies, gasses caused by the decomposition of its tissues may cause the carcass to float. Tides may carry the carcass to the shore. If in deep water, it may become “whale fall,” sinking to the ocean floor at a depth of more than 3,300 ft.

When this happens, it leads to something amazing. In the deep, dark ocean depths, there is litten food. No sunlight reaches the bottom of the ocean, so plants do not grow there. But whale fall provides the nutrients needed to sustain entire communities of organisms.

Unlike in shallow water, the cold ocean depths do not house the bacteria and scavengers that quickly consume a carcass. Lobsters, crabs, isopods, sea cucumbers, shrimp, sleeper sharks, and certain fish may be able to feed on a single whale fall for decades. They, in turn, serve as food for other creatures.

So, even in death, a mighty whale plays an important role in its ocean ecosystem.

Whales are amazing creatures, now that you know some of the reasons whales die, let’s go over them:

Do Whales Die of Old Age?

There is some debate as to whether whales die of old age. If an elderly whale becomes sick or disabled, it may not be able to surface to breathe. Therefore, it drowns. Drowning rather than old age could therefore be named the cause of death.

Do Whales Drown When They Die?

Often, drowning does ultimately claim the lives of whales suffering from other conditions. Whales may drown when they are beached, entangled in fishing nets, or become too weak to reach the water’s surface to breathe.

Do Whales Drown Themselves?

Whales do not purposely drown themselves. However, if they get caught in a net and are unable to surface, they will drown. Beached whales may face a similar predicament. As tides rise, water may cover and enter the whale’s blowhole, causing it to drown before the water becomes deep enough for it to swim away. 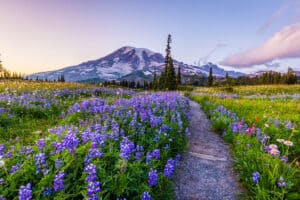