Meet the Snake with a Tail Disguised as a Spider!

If you have a fear of both snakes and spiders, you may want to avoid looking at the spider-tailed horned viper. The reason? This snake has a unique tail that looks as if there is a spider attached to it! But how did this snake evolve this way, and where can you find it in the wild? Once you see what this snake looks like, you may not want to see it in person!

In this article, we will talk about the spider-tailed horned viper in depth so that you can fully understand this unique creature. Not only will you learn how this snake hunts, you’ll also learn about its preferred habitat and whether or not it is dangerous to humans. Let’s get started and learn about this creepy-cool reptile now!

The Spider-Tailed Horned Viper: What is It?

The spider-tailed horned viper is a unique snake from the Viperidae family. It is a member of the Pseudocerastes genus, which is relatively small and includes only two other snake species. All of these snakes are endemic to Asia and the Middle East, including the spider-tailed viper.

These snakes are often referred to as false-horned vipers, given that they have horns over their eyes. However, these horns differ from other horned vipers, as their false horns are made up of multiple scales rather than a single large scale found on true horned vipers. But this isn’t addressing the weirdest part of the spider-tailed viper: the tail, of course!

According to scientists, the spider-tailed horned viper has the most unique tail of all snake species, save the rattlesnake. While the spider-tailed viper appears relatively standard in its size and scale colorations, the tail is what sets it apart. This snake is tan and brown so that it blends in with its natural environment, but its tail grows almost feathered in appearance toward the end.

Why might this be? Why has this snake adapted to look like this? There is one clear and simple answer to this question: the spider-tailed horned viper uses its unique tail for hunting.

How the Spider-Tailed Horned Viper Hunts

The end of this viper’s tail is rounded, with feathery legs on all sides of the bulb. This acts as a lure or a trap for a variety of animals, but studies also suggest that the spider-tailed viper uses this bauble as a defense mechanism occasionally. However, the spider-like appendage on this snake proves irresistible to a variety of animals, particularly birds.

The viper wriggles the end of its tail and lures in its next meal by mimicking the motions of the average insect or arachnid. It often repeats a figure eight motion, which makes it look like a spider scuttling about. Snakes are fantastic mimics, which is why it is fascinating to see a viper adapt its body to incorporate mimicry into its daily feeding!

Where Does the Spider-Tailed Horned Viper Live?

The spider-tailed horned viper lives in Iran exclusively, often earning it the name Iranian spider-tailed viper. It has not been discovered anywhere else in the world, and is even limited to Western Iran in particular.

In fact, the spider-tailed viper was discovered in the Zagros Mountains in 2006, which makes it a relatively new snake species. The Zagros mountains are home to a variety of rare and unique animals, including the Luristan newt and the Persian fallow deer. Many of these animals are considered to be endangered.

These mountainous areas grow quite cold in the wintertime, given their high elevation. It is estimated that the spider-tailed viper hibernates during these months, though it may also have more cold resistance than the average viper. The surrounding fruit and nut trees in the area also means that many different species of birds live here. The spider-tailed viper always has a good meal lined up!

Is the Spider-Tailed Horned Viper Dangerous?

The spider-tailed horned viper, like all other viper species, can indeed be dangerous. However, given the remote location of this particular snake, it is unlikely that you will ever stumble upon one. Keep in mind that this snake is venomous. It uses its tail as a lure and takes down its prey using a venomous bite, swallowing birds and other insects whole!

Whether you are creeped out or fascinated, there’s no denying just how unique the spider-tailed horned viper truly is. You will likely not ever see one in person, but perhaps that is for the best given its venomous nature. However, the spider-tailed horned viper opens the doors to a wide variety of research and discovery, particularly surrounding the adaptations and mimicry of snakes! 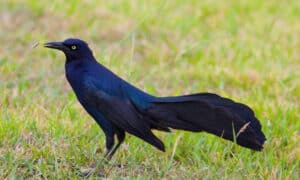