Pigeon Poop: Everything You’ve Ever Wanted to Know

iStock.com/Nikolay Chekalin
Share this post on:
More Great Content:
Watch an Eagle Attack A Trespassing RC…
Top 9 Largest Eagles in the World
Discover 5 Extinct Species Of Birds!
The Top 9 Largest Flying Birds in…
Discover the Largest Hawk in the World
The Top 10 Fastest Birds in the…

Although humans did not meet some of the animals that existed millions of years ago, there is some evidence of their evolution in some modern-day animals that give hints as to how great some of these animals were back when they ruled the earth. Huge animals roamed the earth; dinosaurs, birds, and even centipedes. But evolution happened, and most of them went extinct, and the ones that did not, became smaller.

Pigeons are some of the birds that evolved to become smaller. Most birds evolved from a common ancestor, the velociraptor. The oldest known pigeon is Gerandia calcaria, found in France in the early Miocene period (about 23 million years ago). However, the suborder is thought to have originated in the Australasian region, home to the largest variety of modern Columbiformes. It is interesting to think that birds that were bigger than humans became so small. Their evolution is definitely a story worth learning, especially how it affected their diet and, consequently, their poop!

Bird droppings are fairly prevalent everywhere. One might drop from the sky and land on your clothes or automobile, depending on how lucky you are. Over 400 million pigeons exist worldwide, despite the fact that certain species are extinct or critically endangered. According to the IUCN Red List of 2012, at least 30% of species are vulnerable or near-threatened. Because of how common pigeons are, finding their poop is not difficult.

Pigeon droppings are hard, white-brown in hue, and resemble small marbles. Healthy birds will have a small number of feathers in their feces, while birds that are anxious or sick will have loose, watery droppings. All birds, including pigeons, can mask health problems quite well. One of the surest ways to tell is through their poop.

There are about 340 species of pigeons, many of which are native to the Asian Pacific region and are rarely seen by people. Some of the best-known species, such as the common wood pigeon, rock pigeon, and mourning dove, congregate close to human cities and towns. Because there are so many pigeon species in the world, it is difficult to describe anything precise about their diet as a whole due to how vast and diverse they are.

Pigeons are sometimes referred to as true omnivores because they will consume both vegetables and meat, in addition to pretty much anything else they can find. In actuality, though, practically all of their food is made of plant material, such as grains, grasses, green leafy vegetables, herbs, weeds, fruits, and berries. They also occasionally eat meals of earthworms, snails, and insects as a supplement.

A pigeon’s preferred location has a significant impact on the diet’s composition. Pigeons that live close to the tropics prefer to forage on trees because fruits contain more nutrients than seeds. On the other hand, seeds provide the majority of the nutrients for many temperate species. Around 99 percent of the food of the common mourning dove is made up of seeds, including cultivated grains and peanuts. They are thought to devour between 12% and 20% of their body weight each day. That is almost the same as 71 calories on average.

The anatomy of pigeons is exceptionally well-suited for using the meals in their environment. Pigeons that consume a lot of seeds and grains tend to rely significantly on their gizzards, a specific organ close to the digestive system, to break down tough food. The complex carbohydrates take longer for their stomachs to digest and absorb. Additionally, they have a considerably higher propensity to graze for food. On the other hand, those that consume a lot of fruit typically have shorter intestines and a thinner gizzard. They also tend to be more adept at hanging upside down and clinging to branches, which helps them to better access food from trees.

In addition to being aesthetically displeasing when they stain building facades, pigeon droppings are highly acidic and erode both stone and metal over time. If enough accumulates within homes, the pest’s excrement can cause floors or roofs to collapse. Large amounts can also kill vegetation and contaminate food meant for both humans and livestock.

Although pigeons are very peaceful and harmless creatures, the same cannot be said for their droppings. As a result, those who live in high-rise buildings or apartment complexes where pigeons are a problem do have a lot to worry about. Pigeons can, through their droppings, introduce parasites, ticks, and other disease-carrying pathogens into surrounding environments.

Pigeons pass nitrogenous waste from their bloodstream in the form of uric acid instead of urea and ammonia. They also do not have a separate urinary bladder. As such, the uric acid is passed out of their bodies along with their poop. This could cause irritation and respiratory disorders in humans.
Because pigeons move around in flocks often, it is not uncommon to find a lot of their droppings together in one place. When cleaning it out, it is advised that you do not inhale the dust caused by their droppings. Doing so can cause life-threatening diseases like psittacosis, cryptococcosis, and histoplasmosis. It can also affect the spleen and liver, causing blood abnormalities and even pneumonia.

Meet The 2.2 Ton ‘Many Thorn’ Dinosaur With Spikes All Over 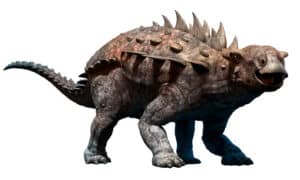