It is almost always the male who makes the famous sad sound, which is a wooing call Click through all of our Mourning Dove images in the gallery. 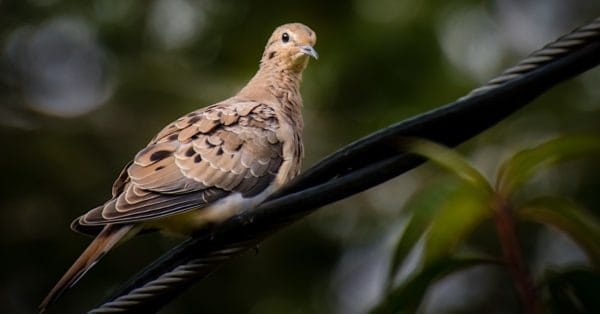 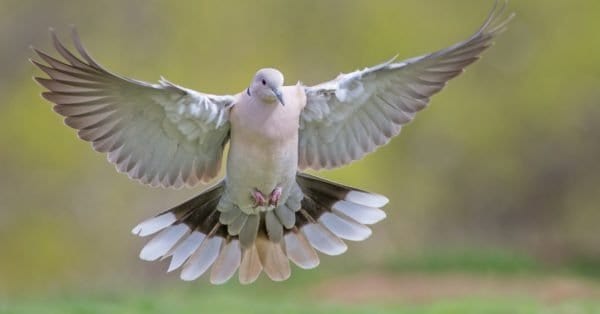 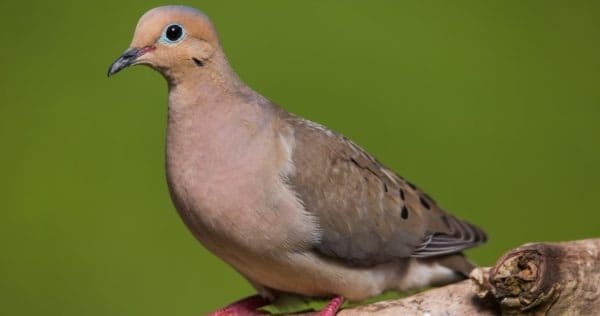 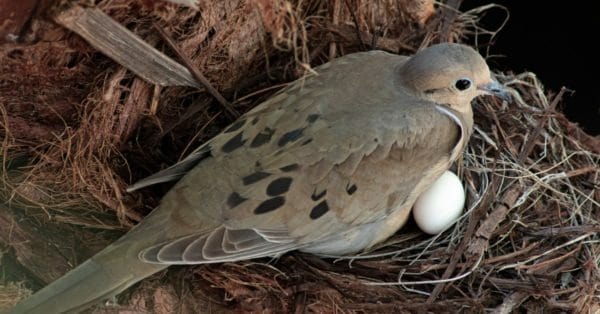 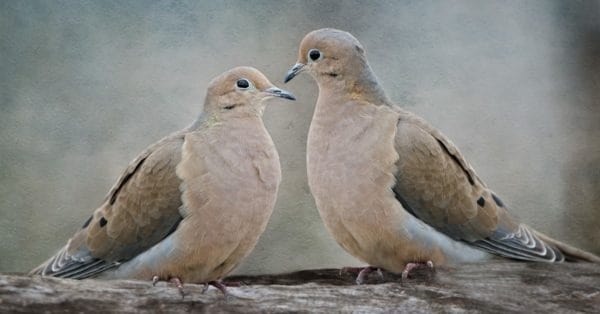 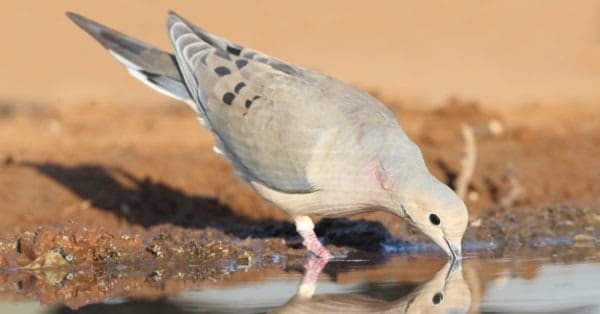 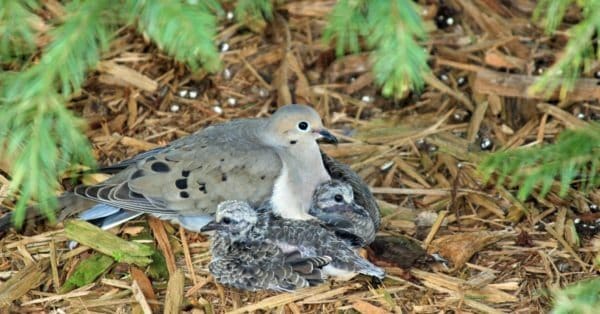 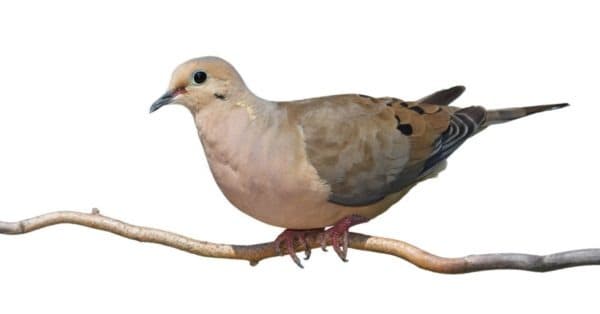 View all of the Mourning Dove images!

It is a member of the dove family, Columbidae. As one of the most common North American birds, it is famous for its easily recognizable silhouette, the mourning sound of its call as well as its symbolism of peace, grief, loved ones, friendship, companionship, and other themes. Although its biggest threat is predation by cats, the population is actually increasing.

Where To Find Mourning Doves

Mourning doves are native to North America, with a large range of almost 11,000,000 km2 (4,200,000 sq mi). They live in southern Canada, the southwestern US, the Greater Antilles, the Atlantic archipelago of Bermuda, south-central Mexico, and Panama. They were introduced to Hawaii in 1963. The birds live in open and semi-open habitats, including urban and suburban neighborhoods, prairie, grassland, farms, and light woods. You can find them in open country, along roadsides, and perched on telephone poles.

Mourning doves are highly adaptable and can make their nest almost anywhere. Although their first choice is dense deciduous and coniferous trees, they also make their nests in shrubs, vines, buildings, hanging flower pots, and as a last resort, the ground. They begin nest building in March with the peak of their breeding season being April-July. Females, with the help of males, build the loose nests out of twigs, conifer needles, and grass blades, or they use the unused nests of other mourning doves, other birds, or tree-dwelling animals such as squirrels.

There are 6 other species in the genus Zenaida. The mourning dove (Zenaida macroura) has 5 subspecies, with Z. m. macroura being the nominate subspecies. Their ranges slightly overlap and their appearances differ slightly. The genus name Zenaida is an homage to Zénaïde Laetitia Julie Bonaparte, wife of the French ornithologist Charles Lucien Bonaparte and niece of Napoleon Bonaparte, while the species name macroura is from the ancient Greek word makros meaning “long” and -ouros meaning “-tailed.”

The mourning dove is closely related to the eared dove (Zenaida auriculata) and the Socorro dove (Zenaida graysoni) and the pigeon genus Patagioenas. It is more distantly related to the wild or passenger pigeon (Ectopistes migratorius) which was hunted to extinction in the early 1900s. Finally, it is similar looking to the European and North African species (Streptopelia turtur) which is also called “turtle dove” but due to its specific name “turtur” which is a Latinisation of their purring turr turr turr song.

The mourning dove is a medium-sized, slender and graceful bird with a length of 22.5-36 cm (8.9-14.2in) with an average of 30.5cm (12in) and weight of 96–170 g (3.4–6.0 oz) with an average of 128 g (4.5 oz). Its wingspan is 37-45cm (14.6-17.7in). Its plumage is light grey-brown with pinkish grey-brown below, with black spotting on the wide, elliptical wings. The long, tapered tail has white outer tail feathers, and black inner tail feathers. It has short, reddish-colored legs, a round head and a short, dark brown-black beak. The dark eyes are surrounded by light skin, and underneath is a crescent-shaped area of dark feathers.

Adult males have bright or iridescent purple-pink patches on the sides of the neck, with light pink coloring down to the breast and a bluish-grey crown. Females have more brown in general and are slightly smaller than males. Females also barely have the bright feather patches. Juvenile birds look scaly and are darker until they reach 3 months of age, at which point they are indistinguishable in plumage from adults. The 5 subspecies of mourning dove look similar to each other, with slight differences in coloring, beak, and leg length.

Mourning doves live year-round in the US. They spend summers in southern Canada and migrate to southern Central America for winter.

The mourning dove’s call is a soft, drawn-out, mournful cooOOoo-woo-woo-woooo sound, which is easily and often mistaken for that of an owl. It is the male who utters it as a wooing call. Pair members preen each other by gently nibbling around the neck as a pair-bonding ritual, progressing to grasping beaks and bobbing their heads up and down in unison.

Mourning doves can be seen panting when hot as they are unable to sweat, and so must drink large amounts of water, which they drink by suction. They sunbathe or rainbathe for up to twenty minutes by lying on the ground or on a flat tree limb, leaning over, and stretching one wing while maintaining the posture, hence the name “rain dove.” They also water bathe in shallow pools or birdbaths and often engage in dust bathing as well.

Their flight is fast and bullet-straight. Outside of the breeding season, they roost communally in trees. Unlike many other species, they sleep by resting their heads between their shoulders, close to the body, rather than tucked under the shoulder feathers. To distract predators away from the nest, a parent will pretend to be injured and flap on the ground at a distance, then fly away from the predator at the last minute.

Mourning doves have a mainly herbivorous diet. They eat mostly a variety of grass and grain seeds, which make up 99% of their diet, and occasionally snails and insects. They often swallow grit in the form of fine gravel or sand to help with digestion later, and fly away after filling their crop. Being ground foragers, they prefer to eat what is readily visible on the ground or on plants.

What do mourning doves eat?

Cats are the mourning dove’s biggest threat. It’s also considered a game bird and is hunted in 40 states. They and especially their babies are also often preyed upon by diurnal birds of prey such as hawks and falcons along with corvids, grackles, and rat snakes. Lead poisoning from eating spent shot in hunting fields is another threat and some hunters plant their favorite seed plants to lure them to the sites.

They begin nest building in March with the peak of their breeding season being April-July. In some areas, it is sometimes as late as October. Mourning doves are monogamous and remain with the same mate for future breeding seasons. They are prolific breeders and can have up to 6 broods in a season, which is necessary due to yearly mortality rates of 58% for adults and 69% for the young.

Mourning Doves sometimes reuse their own or other species’ nests. Males present nesting sites for females to choose from, after which the female builds the nest with the help of the male out of twigs, conifer needles, and grass blades in dense deciduous or coniferous trees. Females lay 1-2 eggs which are incubated for 2 weeks before hatching. The babies are called squabs and they are fed milk for 3-4 days, after which they also eat seeds. They begin fledging in 11-15 days and are still fed by their father for up to 2 weeks. The age of the first molt is 3 months, with adult molting occurring once every 14 days. At 85 days they are able to breed. If the juveniles survive their first year, they can live for 4-5 years in the wild. In captivity, they can live for up to 19 years.

The Mourning Dove’s conservation status is Least Concern according to the IUCN Red List. Its estimated population size is 475 million and increasing. In the 40 states, it is hunted in, over 20 million and up to 40–70 million are shot by hunters each year. The western United States has seen the population decline due to lead poisoning from eating spent shot.

Its call is a cooOOoo-woo-woo-woooo sound, like that of an owl.

It is medium-sized, slender, and graceful with a round head, small dark beak, dark eyes, wide and elliptical wings, and short, reddish legs. Its plumage is light grey-brown with pinkish grey-brown feathers on the underside, and its wings have black spots. A long, tapered tail with white outer tail feathers hides black inner tail feathers. On average it is 30.5cm (12in) in length and 128g (4.5oz) in weight and a wingspan of 40.6cm (16in).

Why is it called a mourning dove?

Due to the sad sound of its call.

Yes, if they are domesticated and hand-fed from youth. They are sweet, gentle, easy to train and bond, and rarely bite.

What does it mean when a mourning dove visits you?

It is believed that the symbolism behind a mourning dove visiting you means a reminder of a deceased loved one. Another symbolism is that your social life is about to take off.

Yes, they migrate during the winter and head to the mid-Atlantic and southern states in late August and early September. Some will stay if they are near a source of food such as birdfeeders.

How many eggs do mourning doves lay?

How fast do mourning doves fly?

What is the mourning dove’s wingspan?

When do mourning doves leave the nest?

What is an interesting fact about Mourning Doves?

It is almost always the male who makes the famous sad sound, which is a wooing call.