The 4 Best Fish to catch in Oklahoma This Summer

Basking in the foothills of the Ozark Mountains, you’ll find Grand Lake. Officially called Grand Lake O’ the Cherokees, it’s a famous fishing spot in Oklahoma. The waters produce some of the biggest fish you’ve ever seen. In 2018, an angler caught a 121-pound paddlefish with a 43-inch girth!

If you have your heart set on making brag-worthy catches this summer, this article is for you. Let’s explore what fish to target, how they taste, and the best tips for catching them.

Read on to find out the 4 best fish to catch in Oklahoma this summer.

When you’re in Oklahoma this summer, you’ll be able to choose between the channel and blue catfish. Channel catfish have a silver underside, usually olive green or bluish gray, on their backs. If you come across a peach catfish, it’s an albino version. Blue catfish have similar colors. Adults usually grow to be 1-1.5 feet long. However, they can get as big as 5 feet and weigh over 100 pounds.

You’ll either love or hate the way catfish taste. Channel catfish have a distinct flavor. They’re not downright fishy, but they don’t taste like chicken. They have a mildly sweet flavor and aren’t as flakey as other fish. Blue catfish don’t have the same muddy flavor as channel catfish. Instead, they taste more like striped bass. If you love spicy flavors, try making a spicy oven-fried catfish recipe. A little lemon pepper and hot sauce on breaded catfish fillets taste irresistible.

Do you feel like trying something completely new? Then try hand fishing for catfish; the technique is growing in popularity across the state. Soon, you’ll see why catfish are the best fish to catch in Oklahoma this summer. You can also try using a rod and reel. If that doesn’t work, you can also use a trotline.

You’ll have more choices when deciding what bass to target this summer. Oklahoma is home to smallmouth, largemouth, white, striped, and hybrid bass. You can quickly identify largemouths thanks to their jumbo-sized mouth that extends to their eyes. They also have a dip in their dorsal fin. Smallmouths don’t have a dip in their dorsal fins, and their jaw only extends to the middle of the eye. White bass has faint striped lines, whereas striped bass has noticeable vertical markings. Finally, hybrid bass is usually shorter than striped and doesn’t usually get as big as white bass.

Each species has a unique flavor. If you’re targeting largemouth bass, you’ll get a slightly fishy flavor and a watery texture. Smallmouths are usually a little cleaner tasting. Overall, bass tends to taste a lot like halibut and cod.

To make the most catches, you’ll want to focus on using frogs, spinnerbaits, and crankbaits. Bass are aggressive feeders. If you notice they stop biting, it’s time to incite them with new bait. The goal is to whip them into a feeding frenzy to make your bait irresistible. One of the best lakes for bass fishing is Grand Lake. There are a lot of big basses there and high catch rates. You could also try fishing out of the Hudson.

Crappie has a mild taste, and they don’t produce a lot of meat. Their meat is light, almost white, and sometimes there will be red parts. You’ll want to cut out the red parts of their flesh; those don’t taste very good. Eating crappie can be good for your health since they have a lot of healthy fats and protein.

You’ll get the most catches by fishing from the shoreline of forested lakes. If you’re going out on a boat, look for downed trees serving as cover. Some famous lakes for crappie fishing include Lake Eufaula, Hugo Lake, and Webbers Falls Reservoir. Focus on the northeastern part of the state. If you have a friend in the area with access to a private pond, fish out of it! It’ll likely be a crappie haven.

When you hear people talking about gar fishing, they’re talking about alligator gar. It’s one of the best fish to catch in Oklahoma because of how much of a fight they put up (and how big they get!). Gars are apex predators with long torpedo-like bodies. They have diamond-shaped dark green scales with a white underside.

There’s a rumor that gars are poisonous to humans–it’s not. The fish is safe to eat, but alligator gar eggs have a defense mechanism that makes them toxic to humans and other animals. The egg’s toxicity helps protect them from hungry predators like crustaceans. Gar doesn’t have a reputation for tasting great. Their hard skin and flesh taste like lobster but not as rich. They produce dark, dense filets that usually have a muddy stringy flavor. You’ll have to decide where you stand on the gar edibility argument. Some people love frying them up with salt and butter. Others don’t feel it’s a high-quality fish to make it worth eating.

Alligator gar season starts in June and goes until May next year. From May 1-31st, you’re not allowed to target them. However, you can catch them during the other times of the year without any issue. Just make sure you’re following the state’s regulations. For instance, you’re not allowed to catch more than one a day, and there isn’t a size limit. To be successful, you’ll need a sturdy hookset to penetrate their tough mouths. Once you hook a gar, get ready for a fight. These fish are intense and wild!

7 Animals That Roll Into a Ball 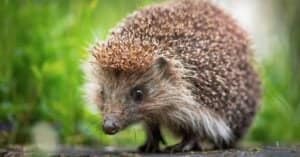