The alligator gar has toxic eggs to protect against predators Click through all of our Alligator Gar images in the gallery. 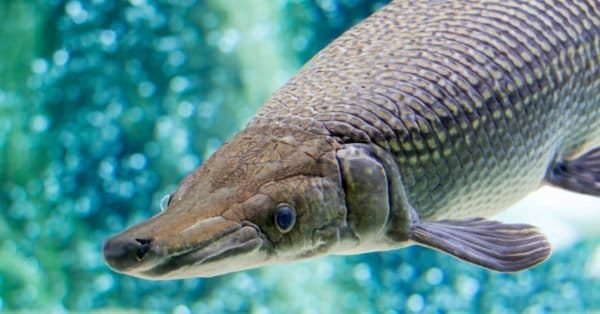 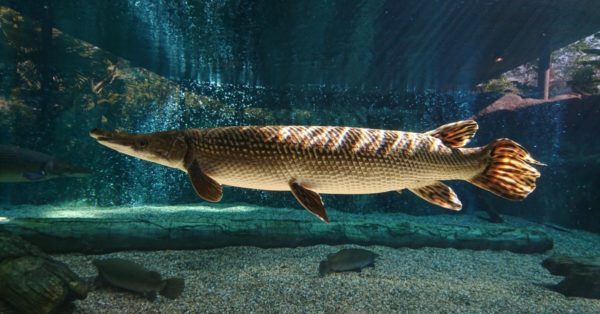 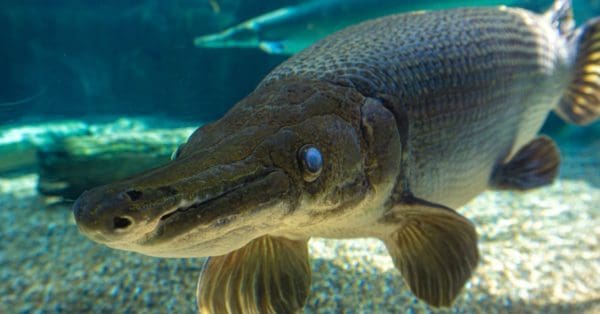 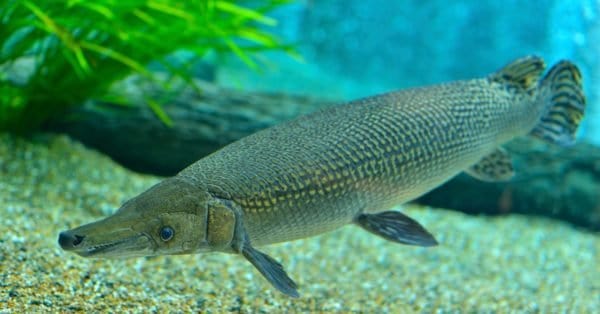 View all of the Alligator Gar images!

The giant alligator gar is among the biggest freshwater fish in the world, but don’t let the large teeth and fearsome appearance fool you. It poses no particular risk of attack to humans.

Unfortunately, this species has earned an unfavorable reputation in its native habitat as a trash fish. On the mistaken belief that it damages nets and eats game fish, people hunted this species mercilessly in the 20th century. Once this misconception was finally corrected, the number of alligator gar rebounded back toward previous levels.

The scientific name of the giant alligator gar is Atractosteus spatula. The name spatula comes to us from a Latin word that roughly translates to “a flat piece.” The alligator gar is closely related to two other gar species within the genus of Atractosteus: the Cuban gar and the tropical gar. There are four other species of gar that occupy the closely related genus of Lepisosteus. Together these seven species represent all known types of gar within the family of Lepisosteidae.

The main difference is that the longnose gar has a smaller body (about 6.5 feet long) but a larger snout in relation to body size. It also has a much wider distribution across most of the Eastern United States.

The alligator gar is the giant heavyweight fish of its native environment. Measuring up to 10 feet and 350 pounds, it is the largest of all the gar species and one of the biggest freshwater fishes anywhere in North America. The world record for a catch was set at 327 pounds in 2011. This record fish was found at Mississippi’s Lake Chotard.

The name of this species is obviously based on its physical similarities to the alligator. Like its namesake, the alligator gar has a very long body and snout, ending in a row of sharp teeth. But unlike the gator, the gar has fins to help it swim underwater. The two pectoral fins are located right by the head, the pelvic fins are located halfway down the body, and the dorsal and anal fins are located right next to the tail. Except for some rare variants, most alligator gar tends to come in similar colors. Gray, green, and brown colors with dark spots dominate around the back. These colors then fade to yellow or white around the lower stomach.

The alligator gar can be found in the lakes, rivers, estuaries, swamps, bayous, and reservoirs of the Southern United States and Eastern Mexico. Its range once extended as far north as Iowa and Nebraska, but after years of hunting, the alligator gar now mostly occupies the lower Mississippi River Valley and possibly as far south as Veracruz, Mexico. The gar’s bladder functions as a kind of lung that enables it to survive in water with low oxygen content. It also has the ability to tolerate a bit of salt water, but it never ventures out to the open sea.

The alligator gar is considered to be a species of least concern by the IUCN Red List. Common threats include pollution, habitat changes, and overhunting. The alligator gar was once hunted on a large scale for no other reason than the mistaken belief that it killed game fish and damaged fishing nets. As hunting has ceased, numbers have recovered a bit, but it has yet to fill all of its previous habitats.

The alligator gar is one of the top predators in its natural freshwater environment. It is an ambush predator that lies in wait for prey and then attacks with its large jaws. The gar’s good vision and ability to sense chemicals seem to be the main means by which they detect prey in the water. They play a similar role as sharks in marine ecosystems by keeping prey populations within healthy numbers.

What does the alligator gar eat?

The alligator gar preys upon almost anything that will fit into its mouth, including smaller fish, turtles, birds, and even small mammals. Some of their favorite fish include buffalo fish, carp, and shad.

What eats the alligator gar?

A fully grown alligator gar has few predators in the wild except for humans and actual alligators. The juveniles are sometimes preyed upon by other fish as well.

Scientists have yet to study the alligator gar’s reproductive behavior and development in great depth. From the little we do understand, we can say that the breeding season occurs between May and July. In Texas, at least, the female does not reproduce every year. Instead, she tends to reproduce when water overruns the banks and creates floodplains. This allows her to lay thousands of dark green or red eggs on the rocks and vegetation near the banks. Although they receive minimal parental care, the unborn gars have a very useful defense mechanism: their eggs are toxic to ingest.

After about six to eight days, the offspring hatch from the eggs, measuring only a small fraction of their full adult size. With their long, sinewy body, they almost resemble sticks. A disc on the snout lets them remain attached to rocks and vegetation, where they continue to grow rapidly by absorbing what’s left of the yolk sac. After the yolk is depleted, they must be ready to fend for themselves.

Since a typical lake can only support a few hundred alligator gar at most, many of the young are obviously expected to be lost to predation early on. These fish grow rapidly in its first year or two of life, though it takes about around 10 years for the alligator gar to reach sexual maturity. Some have a lifespan of more than 50 years in the wild. Females seem to live longer than males on average.

Alligator Gar in Fishing and Cooking

This fish is a very niche type of fish that only the most dedicated recreational fishers would try to catch. For those fishers who are up to the challenge, it represents a real test of preparation and ability. Based on a survey by Texas Parks and Wildlife Department, about 70% of respondents used a typical rod and reel as their primary means of catching the alligator gar. Most of the rest used the bow and arrow. Fishers also use passive gear such as juglines, limblines, and trotlines.

These fish have a white, firm flesh with a mild taste that resembles the flesh of many other sport fishes. Common methods of cooking include fried and barbecue alligator gar. But under no circumstances should the toxic eggs ever be eaten. They may cause temporary sickness.

How do you catch an alligator gar?

The alligator gar should only be pursued by experienced fishers. According to the Texas Park and Wildlife Department, “The most common setup used in Texas is cut common carp placed on a 5/0 or bigger circle hook, treble hook or J-hook with a gap wide enough to encircle the lower jaw. The hook is often fastened by strong braided line to a steel leader, with or without a weight, and fished suspended or on the bottom of a river or lake.” Fishers should give the gar some time to swallow the bait before attempting to reel it in since it is otherwise very resistant to hooks.

What does alligator gar eat?

Despite its ferocious appearance, the alligator gar has not been known to attack a human. However, fishers need to be wary. When it’s thrashing about on a hook, the sharp teeth can easily cut through the skin.

Can you eat alligator gar?

It is safe to eat both the juvenile and adult alligator gar, but the eggs are toxic and should never be eaten.