The Only Monkey in Puerto Rico

Blueton/Shutterstock.com
Share this post on:
More Great Content:
9 Monkey Breeds That People Keep as…
Not My Circus, Not My Monkeys: Meaning…
The 10 Smallest Monkeys in the World
The World's 10 Largest Monkeys
What Do Monkeys Eat? Their Diet Explained
Monkey Lifespan: How Long do Monkeys Live?

Primates are not native to this country, but the one monkey in Puerto Rico is the rhesus macaque. Scientists brought these monkeys over in the late 1930s to study them, but they escaped the research facility. So now, residents of Puerto Rico face a problem.

Rhesus macaques are Old World monkeys that are from the Cercopithecidae family. These monkeys are one of the 20 species in the Macaca genus found mainly in Asia and Puerto Rico.

These monkeys are medium-sized, have a robust body shape, and elongated noses. Rhesus macaques have nails on their digits rather than claws. They have 32 teeth and cheek pouches which they use to store food. These monkeys are often light brown or gray and have paler bellies. They have furless pink faces, and adults have bright red rumps. Their skin is often patchy and differs in color, but this does not affect the color of their fur. The tails of rhesus macaques are long, and they have a wider rib cage than the average monkey. Male rhesus macaques weigh roughly 17 pounds and have an average height of approximately 21 inches. Adult females are smaller, weighing about 11.7 pounds, and have an average height of 18.4 inches. Male rhesus macaques also have long, sharp canines.

Rhesus macaques are usually found in Afghanistan, eastern China, the northern regions of the Indian subcontinent, and north Indochina. These monkeys live in various habitats, from subtropical areas to semiarid plains to rain forests. Some live in dense forests, while others live near farmlands and urban areas.

Rhesus macaques are excellent foragers and strong swimmers. As omnivores, their diet comprises mainly seeds, roots, bark, fruits, and cereals. They also eat termites, grasshoppers, ants, and beetles. These monkeys are resourceful and have ways to find water sources if they are not available. For example, during the monsoon season, rhesus macaques will eat ripe fruits to get their water intake. If they live far from a water source, they will get their water intake from dewdrops on tree leaves.

Wild rhesus macaques live in troops of eight to a whopping 180 individuals. In these troops, there are usually more females than males, and this is because males leave the troops and live alone or in single-gender troops. The troops consist of unrelated males with many closely related female rhesus macaques. The troops comprise different dominance hierarchies, which are divided by sex. The male hierarchies are often more unstable than the female hierarchies. Rhesus macaques are polygynandrous, which means that males and females have multiple mating partners during a breeding season. Rhesus macaques that live in colder climates will mate in autumn.

These monkeys are often used as laboratory subjects and are either of Indian or Chinese origin. Scientists prefer this species because of the variations in their temperament, behavior, disease susceptibility, morphology, and physiology. Rhesus macaques are used as laboratory subjects to study viruses, reproductive technology, infectious diseases, neuroscience, and immunology. They are also the principal primate model for studying acquired immunodeficiency syndrome pathogenesis and vaccine development.

Rhesus macaques, and primates in general, or not native to the island of Puerto Rico.

Clarence Carpenter, a primatologist, brought these primates to Monkey Island in Puerto Rico during the late 1930s. Carpenter brought 450 rhesus macaques to the island from India to study their social and sexual behaviors. Researchers also used these primates to conduct medical experiments. Next, the researchers took them to Monkey Island, a 38-acre island solely inhabited by the monkeys. The University of Puerto Rico then established its education research facility, the Caribbean Primate Research Center, on the island.

With all the scientific studies, these rhesus macaques became some of the best-studied on the planet. Scientists have studied nine generations’ births, deaths, and group dynamics. They have also reviewed their parenting styles, mental abilities, and genes. According to Laurie Santos from Yale University, many early findings surrounding primate communication and behavior originate from Monkey Island.

Today, rhesus macaques live in and around Toa Baja, a small agricultural community west of San Juan. These monkeys escaped from research labs and are a menace to the human population. Many of these monkeys now live near Toa Baja’s dump and look for food in the neighboring neighborhoods. This invasive species has become a problem for residents as the monkeys can become aggressive and destroy property. In addition, many people have voiced concerns about these monkeys living nearby, as rhesus macaques can transmit the herpes B virus to humans. If not treated immediately, this virus can be fatal to humans.

Next Up – More Fascinating Monkey Information

Discover the Highest Point in Nevada 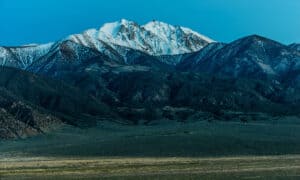