Top 7 Most Colorful Birds in the World

Bright colors aren’t usually considered a good evolutionary trait to possess. It can make prey stand out from predators and prevent predators from efficiently stalking their prey. Yet various bird species continue to flaunt beautiful and colorful feathers. There’s a variety of reasons for this that range from mating to identifying members of the same species to distracting predators. Here are seven bird species with the most colorful, beautiful, and bizarre feathers the are considered to be some of the most colorful birds in the world.

While it might sound like it belongs on a Chinese restaurant menu, the Mandarin duck is far too stunning to subject to that. It combines bright hues of blue, gold, purple, green, and white — and manages to do so while still retaining its handsome good looks. But you have to visit these ducks at the right time to witness that vibrancy. Males grow these colorful feathers during mating season to attract partners, and they revert to the same brown and gray plumage of the females during the off-season.

Mating season is a big deal for these ducks, and males show off their colorful plumage with a complicated mating dance. Normally silent, these birds will make use of a whistling call during this mating ritual. But once they’ve found a partner, Mandarin ducks mate for life. That’s earned them recognition as a symbol of love throughout Japan, China, and Korea. Unfortunately, males will abandon their young after they hatch and not return until it’s time to mate again.

#6: Peacock: A Walking Kaleidoscope of Colors

While many birds display a beautiful combination of colors designed to distract or attract, few possess entrancingly incandescent feathers like those worn by the various peacock species. Consisting largely of shades of green, brown, yellow, and blue, the traditional pigments and the unique patterns of the feathers are stunning in their own right. But these birds have an ace up their sleeve with the presence of photonic crystals. These reflect the light that hits them, meaning that you’ll see different shades depending on the angle from which you’re looking at the bird. These traits developed purely out of sexual selection rather than as a means to survival, and a male’s massive tail plays a significant role in the bird’s complicated mating ritual.

While peacock is colloquially applied to both male and female members of the species, males are technically referred to as peacocks while females gain the moniker of a peahen. The brightly colored tails are only visible in males of the species, with peahens sporting plumage that’s comprised of more muted shades of green and brown. This too serves a purpose, offering them camouflage during the month-long period they need to spend incubating their eggs.

#5: Flamingo: A Reflection of Its Appetite

Flamingos are a living embodiment of the phrase “You are what you eat”. Flamingo chicks are born with plumage that’s white or gray, but they develop their distinctively bright pink feathers as a result of what they eat — algae and brine shrimp. The same pigments that cause shrimp to turn pink when you cook are responsible for their coloring, and they typically take on their pink hue within the first two years of their life. Depending on the availability of food, the brightness of their plumage can vary depending on their habitat. A stark black flaming has even been spotted in Cyprus, though this is believed to be the result of a specific condition.

To some extent, this pink coloration is a privilege afforded to the flamingo for living in an environment with few predators. Because while it makes them stick out like a sore thumb to predators, few predators are willing to wade into the same waters as the flamingo. For instance, lesser flamingos do much of their fishing in Tanzania’s Lake Natron — a body of water known for its harsh pH levels. They’ve developed a thicker skin and specialized legs to survive in this habitat.

#4: Toucan: A Bill As Useful As It Is Colorful

The toucan’s black body is contrasted by its orange or yellow chest and the orange feathers around its eyes, but it’s the toucan’s beak that makes it stand out. These enormous bills come in a variety of vibrant color combinations — and even though both males and females of the species possess these colorful designs, it’s often used as a means for males to attract partners during mating season. And while this enormous and colorful beak doesn’t seem to serve many purposes as a defense mechanism, it possibly developed as a means to deter predators with its intimidating size and vibrant colors.

While the origin behind the toucan’s unique coloring might be ambiguous, the prominence of their bills serves a critical purpose in the South American rainforests that the toucan calls home. These large and razor-edged bills can be used to cut through fruit, trim leaves from trees, and incapacitate prey like small birds, lizards, and rodents. But researchers have developed a newer theory about the toucan’s bill as well — that it helps distribute the heat away from the bird’s body and keep them cool in the tropical conditions of their habitats.

There’s no lack of beautiful and vibrant parrots in the world, but the Crimson Rosella easily ranks among the best of the most colorful birds in the world. Unlike most colorful bird species, both the males and the females possess the same color schemes — a bright red body accented by a combination of black and blue markings, most prominently centered around this bird’s throat and wings. These birds pair monogamously, and they both play a role in the raising of their chicks and eggs — with the mother serving a nurturing role within their nest and the male staunchly protecting the tree. Unfortunately, females of this species are also notorious for destroying the shells of one another. While not fully understood, it’s believed that this behavior is related to fierce competition over territory.

But the chicks that do survive tend to look a little different from their parents. They bear the same bright cheeks as their parents but begin their lives with olive plumage — presumably to make them less of a threat to predators while most vulnerable. Prevalent throughout Australia, these birds have become a popular choice as pets. It’s only one of eight different rosella species, and many of them have equally stunning plumage, albeit in different patterns and color combinations.

Primary colors like blue and red are common among birds like parrots, but being colorful doesn’t have to mean making yourself a target for predators. The red throat and turquoise body of the spangled cotinga are less ostentatious than that of some other bird species, but that doesn’t make it any less beautiful than the other colorful birds in the world. When in the direct sunlight, the combinations of blues, reds, and purples that males of the species exhibit are truly stunning, these birds can be hard to spot. The notable presence of black in their plumage makes the coloring stand out when they emerge for mating while helping them camouflage themselves against predators while among the trees.

Females of the species display more muted colors that provide them with even more protection against predators, but both genders tend to not move too much from their small habitats. Despite being a prodigious species throughout the Amazon rainforest, they can be somewhat hard to catch a glimpse of. And the fact that they’re mostly silent means that birdwatchers can’t even identify these birds by listening for them.

#1: Scarlet Macaw: As Talkative As It Is Colorful

A scarlet macaw’s plumage will typically reflect every color in the rainbow — and when you combine that with their incredibly talkative natures, you might assume that they’re one of the easiest targets for predators around. But their vivid coloring — along with the fact that they tend to gather in flocks — actually serves as a defensive tool. Scientists refer to this strategy as “disruptive coloration”. The eyes of predators are designed to face straight forward so that they can focus on a single object, but when a group of macaws flees together, their bright combination of colors makes it incredibly difficult for a predator to fixate on a single object. That doesn’t stop predators from trying, and the scarlet macaw is hunted by everything from monkeys to snakes to jaguars.

The scarlet macaw isn’t the most advanced imitator of human speech, but they’re capable of learning a vocabulary of roughly five to ten words. Unfortunately, this most colorful bird in the world is an endangered species thanks to the destruction of its habitat and human interest in keeping them as pets. 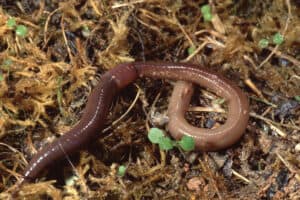