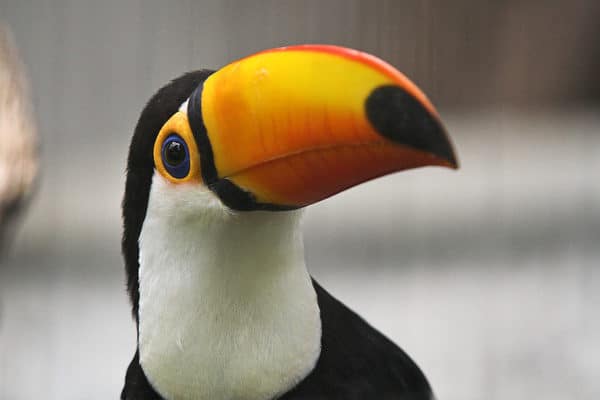 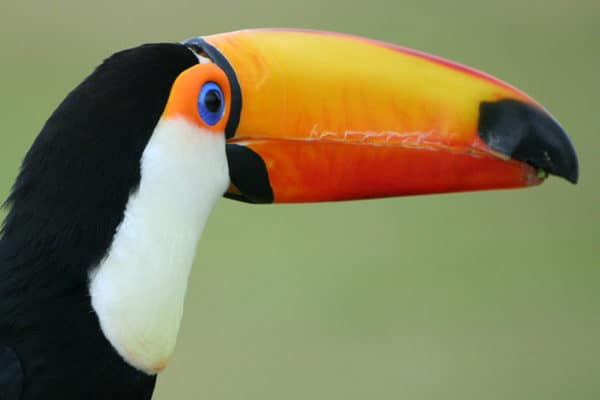 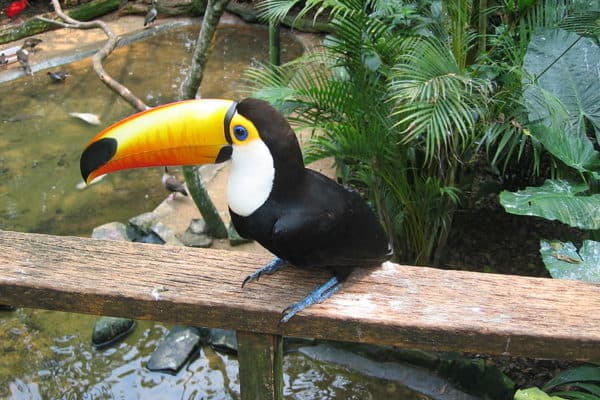 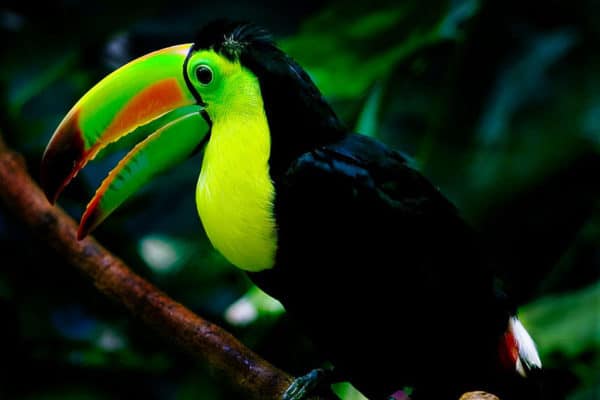 The toucan is a medium-sized bird native to the rainforests of central and South America and the Caribbean. There are more than 40 different species of toucan that inhabit the South American jungles today.

The toucan is best known for its large colourful beak that despite its large size, is surprisingly light due to the fact that it is made of a substance called keratin (the same substance that makes up the nails and hair of many animals including humans). The toucan’s beak measures around half the toucan’s body length and is used for mating, feeding and defence purposes. The toucan’s bill however, is not particularly strong and so it is used more to intimidate predators rather than to fight them off.

The toucan only has small wings as it dwells in forests and therefore do not need to travel large distances. The toucan’s wingspan is roughly the same length as the toucan’s body. Although the toucan is able to fly, the toucan is not very good at flying and cannot be in the air for very long. Instead of using their wings to get around, the toucan hops between the tree branches using it curved toes and sharp claws to get a good grip on the narrow surface that it holds on to.

Toucans are omnivorous birds and feed on a mixture of plants and animals. Toucans eat fruits, berries, nuts and seeds along with eggs, insects and small mammals and reptiles. The primary source of food for the toucan is the fruit which grows on the trees where the toucan lives.

Toucans have a number of predators in the South American jungle including humans, large birds of prey and wild cats. Weasels, snakes and rats tend to prey more on the eggs of the toucan rather than the toucan itself (many small animals are generally intimidated by the toucan’s large bill).

Although toucans are generally solitary when feeding, toucans often live in small groups of around 6 or 7 birds. The bright colours of the toucan give the toucan camouflage in the colourful rainforest canopy. However, due to their bright colours, toucans are often captured and sold as pets with toucans being popular animals in the exotic pet trade.

Toucans build their nest in trees and lay around 3 eggs. When the toucan chicks hatch, both the male toucan and the female toucan help to feed them and protect them from predators. The toucan chicks are born with small beaks that don’t reach their full size for at least a few months.