Closely related to the Manatee!

Click through all of our Dugong images in the gallery. 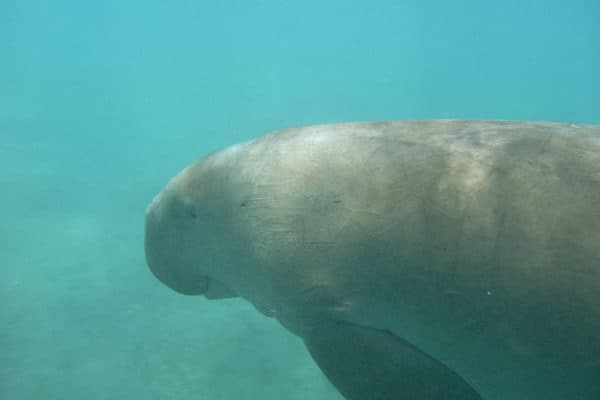 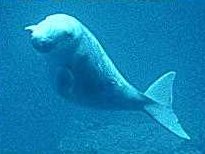 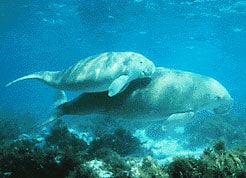 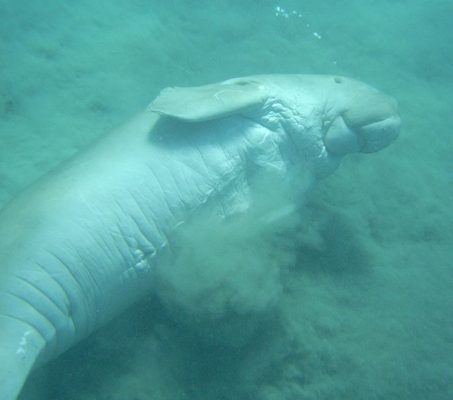 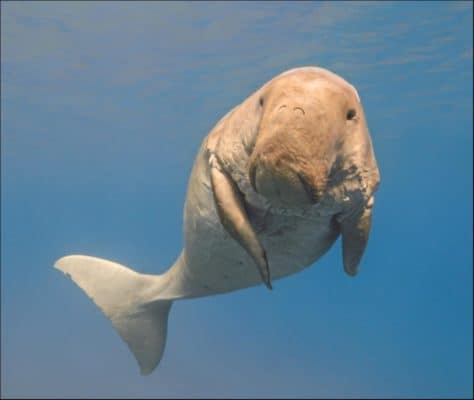 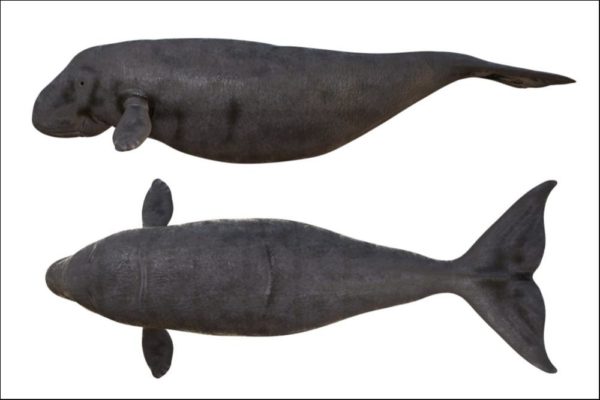 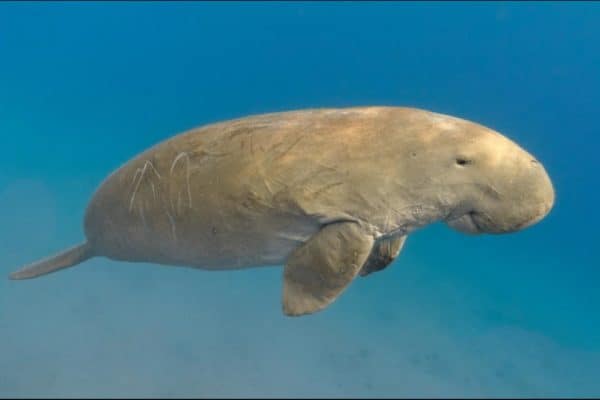 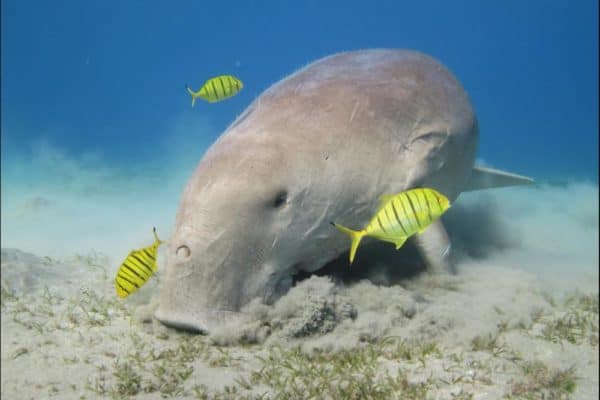 View all of the Dugong images!

The dugong is one of the few herbivorous marine mammals still remaining in the world.

This species is a familiar sight to any inhabitants or tourists who visit the coastal waters of the world’s tropical regions. It moves through the water with a slow, languid pace and chews up the grass on the bottom of the ocean floor to survive. Its herbivorous lifestyle and moderate temperament have earned it the nickname of the sea cow or the sea pig. Though not yet endangered, the dugong may be vulnerable to human activity and coastal development.

The scientific name of the dugong is simply Dugong dugon. This name probably comes from the local Visayan word for the species, which was later picked up by Europeans. Visayan is spoken in what is now the modern-day Philippines. The dugong is one of four living members of the order Sirenia — the others being three species of manatees — and the only living member of the family Dugongidae. A second member of the family, Steller’s sea cow, was driven to extinction in the 18th century due to over-hunting. Nineteen total genera from the family are known from the fossil record.

Despite the enormous physical differences, the sea cow is most closely related to modern-day elephants. The two groups likely diverged from each other more than 50 million years ago. The earliest Sirenians were probably four-legged amphibious mammals that could move easily between the land and water. They may have been about the size of a hippopotamus, feeding on the plant matter found in shallow waters.

Dugongs are large, elongated mammals with a down-turned snout and thick brown or gray skin. The technical term for the body shape is fusiform. This means their bodies are shaped like a spindle that is tapered at the ends. Dugongs can measure anywhere between 8 and 10 feet in length and up to 1,100 pounds in weight. Their immense weight is owed to the thick layers of fat surrounding their bodies to comfortably insulate them when the water turns cold. They are powered through the water by moving their dolphin-like fluked tails up and down, while their paddle-like front flippers help them steer and maneuver. They lack both hind limbs and a dorsal fin.

Despite their aquatic nature, dugongs share the same traits as other terrestrial mammals in almost all characteristics, including the structure of the skeleton and the presence of mammary glands directly under the fins. Apart from the usual sexual characteristics, there is little difference between male and female dugongs. Both sexes have long tusks projecting from their incisor teeth. Their ears, which lack any external flap, are located on the sides on the head.

One of the dugong’s biggest weaknesses is its poor eyesight, but this is made up for with its sharp hearing and olfactory senses. The primary means of communication with other dugongs include chirps, whistles, and barks. Each sound seems to have a specific purpose in conveying aggression or affection to other members of the species. They also have bristles all over their bodies and around the face to help them forage for food at the bottom of the sea bed.

Despite the strong adaptations for their marine habitats, dugongs can only stay underwater for around six minutes at a time before they need to return to the surface for breath. They will sometimes breathe by poking their head above the water while standing on the sea bottom with their tails. Valves in their nostrils will close during dives to prevent water from entering.

Dugongs are considered to be social creatures that prefer the company of others, and yet they have no set social group. They often travel alone or in pairs but will also gather into huge herds of hundreds at a time. Because the habitat cannot support large groups for long, these herds will form quickly and then dissipate. They are nomadic creatures that may travel immense distances around their natural habitat in search of food and resources. However, many other aspects of the dugong’s behavior remain a mystery.

The dugong inhabits the nearby warm coastal regions of the Pacific and Indian Oceans. Its range is very large but also fragmented. This includes the eastern coast of Africa, Madagascar, the Persian Gulf, the coasts of India and Sri Lanka, and the Pacific region around Southeast Asia and Australia. It is also believed that they might have once inhabited the Mediterranean Sea many thousands of years ago.

Dugongs are often found in bays, mangroves, estuaries, and other shallow water around continents and islands. They prefer to graze in the water around 30 feet deep, but they can dive down to more than 120 feet for short periods of time in search of food. Some populations have also been known to frequent reefs or deeper waters for safety, despite the lack of food in these areas.

Dugongs have adapted a herbivorous lifestyle that largely revolves around the consumption of seagrass. They have the option to either feed superficially on the leaves or attempt to dig up the entire plant by the root. Less commonly, they will consume algae when seagrass cannot be found. Some populations will resort to consuming invertebrates such as shellfish, sea squirts, worms, and jellyfish, especially those hiding along the seagrass.

Dugongs float across the bottom of the water to search for grasses with their bristled snouts. Their muscular lips help them suck up large quantities of food at a time. Their feeding behavior actually leaves behind large furrows on the sea bed that can be seen from the surface. Dugongs are active foragers during both day and night hours. They need to consume large quantities of food every day to survive.

Due to their docile nature and relative lack of defenses, a single dugong can make a tempting target for a number of hungry predators. Their one true defense is their immense size, which allows them to fend off all but the largest creatures such as sharks, crocodiles, and killer whales that patrol the coasts. The young calves are most vulnerable to predation since they are almost completely defenseless in their first few years of life. Many dugongs also die from diseases and parasites in large numbers. This is perhaps the largest threat to their survival besides human activity.

Humans have traditionally hunted dugongs for thousands of years due to the value of their oil, skin, and meat. Dugongs have often thrived in spite of this human predation. But with the rise of industrialized hunting in the 18th century, the species was placed under increasing duress. The species is now better protected from wanton hunting by international laws, but it still faces several other threats.

Habitat loss from coastal development and water pollution is a persistent problem. Oil spills, chemical runoffs, and radiation make some parts of the coastal region uninhabitable. Dugongs may also become entangled in nets or get into an accident with marine vessels. Underwater noise may disturb the dugong’s natural behavior or cause distress. Finally, climate change may alter the animal’s habitat to the point of irreversible damage.

Unlike many other species, dugongs do not have a set mating season. Instead, they can mate all year round, whenever an opportunity presents itself. After dugongs congregate in an area, the males engage in competitive and aggressive mating displays to attract females. The mating itself can sometimes turn violent and leave permanent scars on the female’s body.

After mating, the female will take a full year to carry the young to term. Due to the longer development periods, she may only give birth once every three to seven years. Twins are relatively rare. The young dugong is born underwater and must quickly make its way to the surface to breathe. The child will continue to nurse with its mother for the next 18 months or so, sometimes hitching a ride on its mother’s back. The young calf will form a close bond with its mother, who takes sole responsibility for nurturing and care. She will teach the calf how to feed on grass, communicate, and survive in the wild. The calf will seek solace and protection behind the mother when a predator is in the area.

Both sexes exhibit quite a lot of variability with the age of sexual maturity. Dugongs can become sexually active as soon as six years of age, but it can be delayed by many years as well, perhaps due to the lack of ample food supply in the area. After they do achieve sexual maturity, they will leave their mother and begin to seek out mates. Dugongs have a remarkable life span of up to 70 years in the wild. The age can be estimated by counting the growth layers on the dugong’s tusks.

The International Union for the Conservation of Nature (IUCN) Red List currently lists the dugong as vulnerable to extinction. Despite plenty of legal protection, population numbers appear to be decreasing across the world. Due to their specific dietary needs and slow reproduction times, dugongs may be particularly susceptible to population depletion.

To maintain or bolster population numbers, local peoples and governments will need to protect the coastal habitat, reduce incidences of vessel strikes and net entanglements, and implement more sustainable hunting practices. Dugong hunting still remains an important cultural practice to some cultures around the region. However, some Australian states have established protected parks for dugongs that no one can hunt in.

How many dugongs are left in the wild?

What is the difference between a manatee and a dugong?

There are several physical and behavioral differences between them as well. Dugongs occupy marine coastal waters, while manatees are adapted for freshwater areas. They also lack the fluke-like tail of the dugong. The two animals remain similar enough, however, that people may mistake them for each other at first glance.

What are the main predators of the dugong?

Dugongs are sometimes at risk of being attacked by sharks, crocodiles, and killer whales that lurk near the coastal regions of the Pacific and Indian Oceans. Humans are also a threat.

What do dugongs eat - are they carnivores, herbivores, or omnivores?

Dugongs are considered herbivores because they primarily feed on a diet of seagrass and algae at the bottom of the coastal beds. Less commonly, they will consume invertebrates either as a supplement while foraging for grass or as a replacement when other foods cannot be found.

What Kingdom do Dugongs belong to?

Dugongs belong to the Kingdom Animalia.

What phylum do Dugongs belong to?

Dugongs belong to the phylum Chordata.

What class do Dugongs belong to?

Dugongs belong to the class Mammalia.

What family do Dugongs belong to?

Dugongs belong to the family Dugongidae.

What order do Dugongs belong to?

Dugongs belong to the order Sirenia.

What genus do Dugongs belong to?

Dugongs belong to the genus Dugong.

What type of covering do Dugongs have?

Dugongs are covered in Leathery skin.

In what type of habitat do Dugongs live?

What are some distinguishing features of Dugongs?

What is the average litter size for a Dugong?

The average litter size for a Dugong is 1.

What is an interesting fact about Dugongs?

Dugongs are closely related to the Manatee!

What is the scientific name for the Dugong?

The scientific name for the Dugong is Dugong Dugon.