It has loose neck skin for lessening bites and allowing mobility from predators.

Akbash as a Pet:

Click through all of our Akbash images in the gallery. 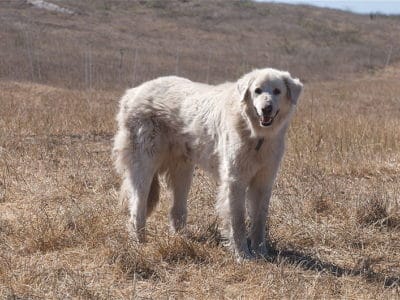 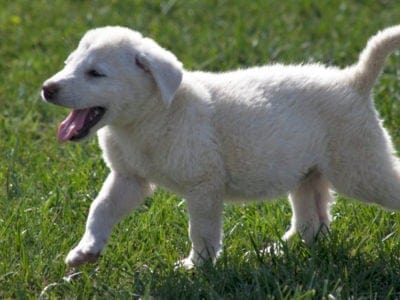 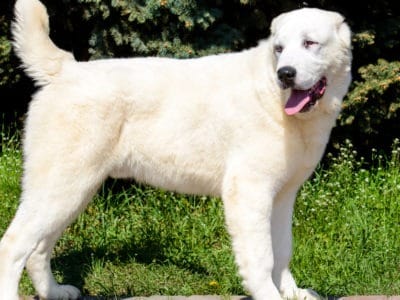 View all of the Akbash images!

The Akbash, also called the Coban Kopegi, the Akbas, or Aky, is an ancient large to giant dog breed from Turkey dating back from 3,000 years ago. It was brought to North America in 1970.

One of the best watchdogs, it is part of the Working group of Livestock Guardian Dogs and one of the national dog breeds of Turkey. Its name means “white head” and its white-colored fur easily distinguishes it from predators. It is similar and often compared to the Great Pyrenees.

With a calm, independent, and alert temperament, excellent sight, and lean, muscular body, Akbash are powerful against predators and makes an excellent guardian dog, which it still is in Turkey. Its lack of natural hostility makes it a good companion pet.

3 pros and cons of owning Akbash

The purebred Akbash is vulnerable to certain health issues that are common in working breeds. The most common is hip dysplasia, which affects the ball and socket joint in their hips and can severely range its movement and range of motion later in life, especially when arthritic.

You can decrease the chances of encountering this condition by buying from Orthodpedic Foundation for Animals (OFA) hip certified stock. Gastric torsion (bloat) is another possible condition and it is seen in large breeds. Destructiveness is a main behavioral issue when the Akbash is bored or cooped up and can lead to OCD. In sum, the most common health issues with the Akbash are:

The Akbash has a temperament that is neither shy nor aggressive. Its personality is adaptable. Some words that describe its traits are: Gentle, calm, patient, adaptable, stoic, protective, affectionate, alert, maternal, loyal, independent, and brave.

The Akbash is a popular choice for farmers needing guardians for livestock or for families with children, since it displays the same behavior towards its flock as it does towards family members, especially when socialized early in life. It is somewhat playful but has a low prey drive and takes longer to mature than smaller breeds, so they lack their full mental capacities until they do.

You can count on the Akbash to have a low tendency to bite since its personality is not naturally hostile. Its natural behavior is suspicious towards strangers, yet its traits of mental awareness and gentleness make it a non-lethal predator deterrent.

How To Take Care of Akbash

New pet owners looking for how to care for the Akbash, specifically Akbash puppies, must consider factors related to both its working group as well as its unique breed. Whether it’s health issues like hip dysplasia or different care related to its hair and large size, the Akbash has unique factors that should be considered.

The Akbash, especially puppies, have different health considerations compared to other breeds and especially non-working dogs. Therefore, even experienced dog owners should consider certain factors when choosing a food for their pet:

Health and Entertainment for your Akbash

Akbash puppy dog food: Because of their size and genetic makeup, the Akbash has a tendency to develop hip dysplasia. Whether dry kibble or wet canned food, the food you choose for your Akbash puppy should not only be large breed and age-appropriate but contain high amounts of meat, calcium, and other nutrients for its developing needs. Feed your puppy 3-4 small meals a day or according to directions.

Akbash adult dog food: The Akbash has a slow metabolism and as a natural working breed does well on less food than other breeds, spending most of its time being aware of its environment and patrolling.

Its diet requirements should provide nutrition to maintain eyesight, mental awareness, and bone health, as well as speed and agility when necessary. High-quality economic dog food is fine, but red meat is ideal. The Akbash also needs fiber in its diet, which you can provide with vegetables or with dog food containing vegetables. However, to avoid problems like excess weight or bloating (gastric torsion), do not overfeed.

Remove the food from your pet’s dish after 10-15 minutes, and feed your dog no more than two meals a day. Cooked egg, fruit, cottage cheese are fine as long as they are no more than 10% of its diet. Avoid exercising your dog for one hour before or after meals.

The Akbash has a double coat which can be short, medium, or even longer. It requires weekly brushing as well as carpet vacuuming, plus more frequent brushing during seasonal shedding periods when it changes its coat. On the plus side, its fur does not mat and does not have much odor. It also does not need special grooming, making its maintenance needs fairly moderate.

Like other breeds, the Akbash needs early training and 3 months is the recommended starting point. It needs a strong, firm but experienced and patient handler who will not be verbally harsh or physically punishing. This breed acts on its own and is very independent, being able to survive on its own by digging for gophers and other small animals to eat. It is eager to please and once it learns tasks, it does not need prompting.

Although the Akbash has a low energy level, it saves its energy for defense against predators. To stay lean, healthy and happy, it needs 20-40 minutes of exercise every day as well as plenty of room to roam around in outside, as it does not enjoy playing indoors and prefers to have some alone time. Special care should be taken to locate the Akbash to a suitable home and property or backyard which it can patrol freely.

Akbash puppies are much like puppies of other breeds, with a moderate amount of mouthiness. This habit needs to be trained out of them to avoid continuing the behavior as adults. This breed is slow to reach adulthood, reaching full maturity and mental awareness until 2 to 3 years of age.

The Akbash is as submissive to and protective of children as it is with livestock, given early exposure from socialization. In fact, it considers children to be part of its flock. It is affectionate and loyal to its family, but shy and suspicious of strangers without being immediately aggressive towards them. This breed is moderately playful and a good option for families with children.

Sighthounds and mastiffs or molossers are believed to be the Akbash’s ancestors. Breeds similar to the Akbash are other livestock guardian dogs, especially from the Mediterranean Basin (Turkey, Hungary, Italy, Spain, and France). They include the Maremma Sheepdog, Polish Tatra, and Kuvasz.

The Great Pyrenees looks similar to the Akbash but with a heavier head, less lean body, shorter legs, and longer, heavier-shedding coat. Like the Akbash, the Great Pyrenees has white fur and sometimes have patches of grey or biscuit coloring.

Their ancestors date back to Asia Minor around 10,000 BC and eventually came to Spain and then France, where the breed was developed into that which we know today. Both breeds are about the same height and lifespan, with the Great Pyrenees weighing about 24lbs (11kg) less as well as having a larger litter size of 7-12 instead of 8-9 puppies.

Although the Akbash is one of the national dog breeds of Turkey and can be exported, it is rarely known outside of the country, where it remains popular as a livestock guardian dog. You can, however, find plenty of owners’ photos of it on Instagram.

Popular names for Akbash include:

Are Akbash herbivores, carnivores, or omnivores?

Akbash are Omnivores, meaning they eat both plants and other animals.

What Kingdom do Akbash belong to?

Akbash belong to the Kingdom Animalia.

What class do Akbash belong to?

Akbash belong to the class Mammalia.

What phylum to Akbash belong to?

Akbash belong to the phylum Chordata.

What family do Akbash belong to?

Akbash belong to the family Canidae.

What order do Akbash belong to?

Akbash belong to the order Carnivora.

What type of covering do Akbash have?

Akbash are covered in Hair.

What genus do Akbash belong to?

Akbash belong to the genus Canis.

What are some distinguishing features of Akbash?

How many babies do Akbash have?

The average number of babies an Akbash has is 8.

What is an interesting fact about Akbash?

What is the scientific name for the Akbash?

The scientific name for the Akbash is Canis Lupus.

What is an Akbash?

The Akbash is a large to giant size, short to medium-haired, ancient working breed from Turkey that was bred as a livestock guardian.

How do you pronounce Akbash?

Yes, Akbash make good pets as long as they have enough space and an owner who has previous experience handling, training, or owning dogs.

Do Akbash bark a lot?

Akbash have a moderate tendency to bark and will bark to alert their owners or flock of danger or predators. They may also bark a lot if bored or cooped up.

No, they are not. They are protective towards their family and flock but shy of strangers and are not naturally hostile, with a low tendency to bite.