Anatolian Shepherd Dog as a Pet:

Click through all of our Anatolian Shepherd Dog images in the gallery. 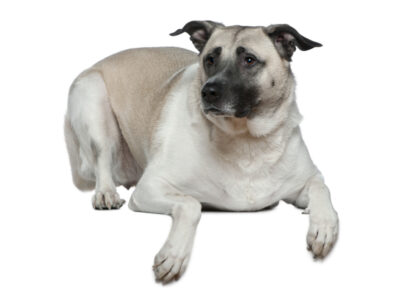 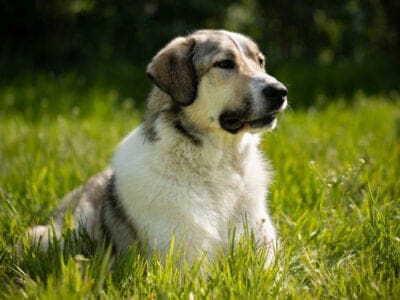 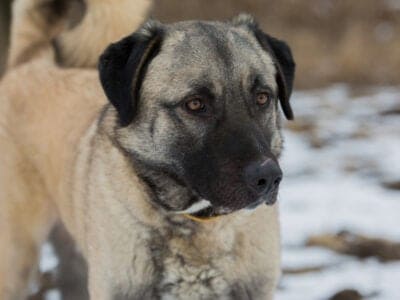 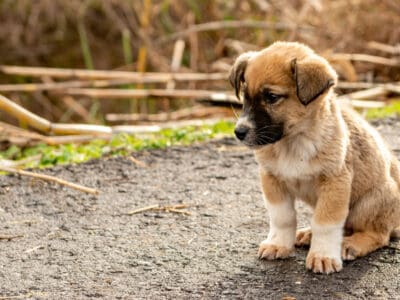 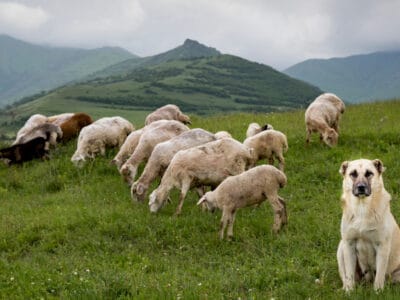 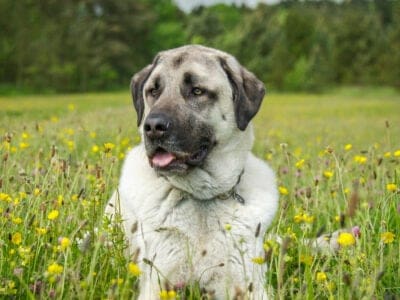 View all of the Anatolian Shepherd Dog images!

The Anatolian Shepherd is a big, muscular breed of ancient guard dog that originated from what is now modern-day Turkey, perhaps as far back as 2000 BC. The dog’s original purpose was to guard the livestock, not to shepherd them. Thanks to its size and ferocity, it could stand up to aggressive predators like bears, coyotes, and wolves that might threaten the livestock.

The Anatolian Shepherd is characterized by long legs and neck, a curled up tail, a deep chest, drooping triangle-shaped ears, and a big skull. The short coat of fur is dense, particularly around the neck and limbs, with a fawn or white color and a black or brown mask around the face. This gives it a distinctive look, even among larger breeds.

A quick note on the name: “Anatolian Shepherd” is kind of a catch-all term given to it when the dog arrived in the United States in the 20th century. It includes the Kangal Shepherd Dog and other related Turkish livestock breeds. “Kangal” comes from the name of a small town in central Turkey, where the breed was particularly popular for centuries.

3 Pros and Cons of Owning an Anatolian Shepherd

The Anatolian Shepherd is a large dog, weighing in at anywhere from 90 to 150 pounds. This livestock guardian has a thick coat of hair that adds weight to its body, making it look considerably heavier than it is, especially in the area of the mane. The color of this hair is usually either brown, red, tan, or white, and the dog often has a blend of one of these colors together with black on its face and ears.

It needs to be brushed about once a week most of the year to get rid of the heavy coat that would otherwise fall off over time. Twice a year it will need more brushing to get rid of the coat that is coming out. The dog may ignore strangers if it has not been properly socialized, so if you are interested in one of these it is best if you socialize it well from the beginning.

For a dog of this size, the Anatolian Shepherd has a decent lifespan of around 11 to 13 years, but it still may be at risk of developing several health problems, including demodicosis mange (skin and fur issues caused by an infestation of mites), entropion (in which the hair from the eyelash grows backward and irritates the surface of the eye), dysplasia (a deformed joint), and cancer (a leading cause of death). Bloating, a life-threatening condition that results from the buildup of excess gas or food in the stomach usually isn’t a big problem with this breed, but owners should know the symptoms, like excess salivating or an enlarged abdomen, so you can act quickly when it arises.

Health and Entertainment for your Anatolian Shepherd Dog

Good breeders will always test their dogs for common developmental and genetic disorders, so you should always ask the breeder for proof of a positive health assessment. After bringing your dog home, you should also schedule regular visits to the vet to check for common health problems. In summation, these are the most common health problems of an Anatolian Shepherd:

First and foremost, the Anatolian Shepherd is an excellent guardian and protector; all of its natural instincts were bred for this purpose. It has an alert and protective personality and regards anyone within the close family as its “flock” to be guarded. This also means the dog is very suspicious and wary of strangers. While a properly socialized dog won’t exhibit too much aggressive behavior, it will take a lot of time and effort for this breed to accept unfamiliar people and animals. Once it becomes part of the family, though, this breed should be a calm and devoted companion.

How to Take Care of the Anatolian Shepherd

Due to their enormous size, independent nature, and somewhat difficult care, the Anatolian Shepherd probably isn’t recommended for novice owners. It requires a strong but understanding leader who knows how to work with their unique quirks. This breed also is not very well-suited for apartment living either. If you have any other questions or concerns about this dog, then you should consult with your vet.

An adult Anatolian Shepherd will probably need around 3 to 4 cups of high-quality dog food per day, which may vary based on age, size, and activity level. This breed does not tend to overeat, but treats and snacks should be nonetheless limited.

While this breed doesn’t require any special grooming techniques, it should receive weekly brushing to deal with loose hair and prevent matting. During the shedding season, brushing should ideally occur at least once a day. The Anatolian Shepherd will also need the occasional nail trims (maybe once every four to six weeks), regular ear checks, and teeth brushings with a healthy vet-approved toothpaste.

This breed scores highly on intelligence rankings and has the ability to learn commands relatively quickly, but it is by no means an easy dog to train. It’s independent-minded, relentlessly driven, and always seeking to dominate and become the leader, so obedience training is an absolutely necessity as early as possible. This breed needs a consistent and assertive presence (combined with positive reinforcement methods) to properly guide it. Keep in mind that there is only so much training can do; at some level, its instincts are always ingrained. If you are having trouble, then you might want to hire the services of a professional trainer.

The Anatolian Shepherd is an athletic breed that needs at least an hour of exercise every day in the form of long walks, hikes, jogs, toys, games, fetching, and other playtimes. This breed will benefit from access to a large fenced yard with a locked gate. When walking your dog, make sure it is tethered to a leash at all times. Its behavior can be somewhat unpredictable.

Anatolian Shepherds are big, fast-growing puppies. Because their bones and joints take time to fully develop, it’s recommended to limit the amount of time your dog spends playing or running on hard surfaces for the first year or so of its life. Early obedience training and socialization are necessary with these puppies. Even if their instincts remain strong, it will help them become comfortable around new people and situations. Crate training can also help ease anxiety and assist with house training.

The Anatolian Shepherd and Children

This breed is surprisingly gentle for its size and should get along very well with any children it’s been reared with. Older children are generally better because they can take on the responsibility of caring for a large dog.

Unfortunately, due to its naturally protective tendency, this breed might regard other children with suspicion. Any such interactions between your dog and your children’s playmates should be carefully supervised by an adult at all times.

Dogs Similar to the Anatolian Shepherd

If you’re looking for a dog similar to the Anatolian Shepherd, then you should check out one of the following livestock guardians:

This breed ranks average in terms of popularity in the United States, but it has appeared in numerous films, including the 2001 romantic comedy Kate and Leopold, the 2001 children’s film Cats & Dogs (in which it was voiced by Alec Baldwin), and the 2000 comedy Road Trip.

If you are still searching for a good name for your new Anatolian Shepherd, then you might want to consider one of the following options:

View all 81 animals that start with A

What is an Anatolian Shepherd?

The Anatolian Shepherd is a big, strong livestock guardian originating from what’s now modern-day Turkey. While very loyal toward family, it’s also suspicious and wary of strangers and needs to be socialized early on. This breed scores very high on intelligence rankings, but it’s also independent-minded and somewhat difficult to train. It has a lifespan of around 11 to 13 years.

Is an Anatolian Shepherd a good family dog?

The Anatolian Shepherd should be naturally protective toward members of the family, but it might need time to become comfortable with people.

The Anatolian Shepherd does have a natural tendency to become aggressive toward anything it perceives as a threat. Proper obedience training and socialization from an early age will teach it to be calm around strangers.

How much does an Anatolian Shepherd cost?

The price of a newborn Anatolian Shepherd from a high-quality breeder will normally be somewhere between $500 and $1,500, in addition to the price of food, toys, and optional things like a crate. You can count on paying a lot more than this for a dog with an excellent pedigree. If price is a concern, however, then you might want to consider adopting a dog from a shelter or rescue. There are some rescue groups across the country specifically dedicated to the Anatolian Shepherd. Otherwise, you might have to get lucky at a general rescue.

Is an Anatolian Shepherd a mastiff?

While there are certainly some similarities between them, such as the large size, short coat, and working characteristics, the Anatolian Shepherd is not generally regarded as a type of mastiff. Livestock guardians are closely related but distinct. The evidence suggests that the livestock guardians were developed first, and the mastiffs may have been developed from them.

What are the most common mixed breed Anatolian Shepherds?

The most common mixes are the Anatolian Pyrenees (a Pyrenean mix), a German Anatolian Shepherd (a German Shepherd mix), and a Plush Danois (a Great Dane mix).