Although originating from Japan, the Akita has an American equivalent mix Click through all of our Akita images in the gallery. 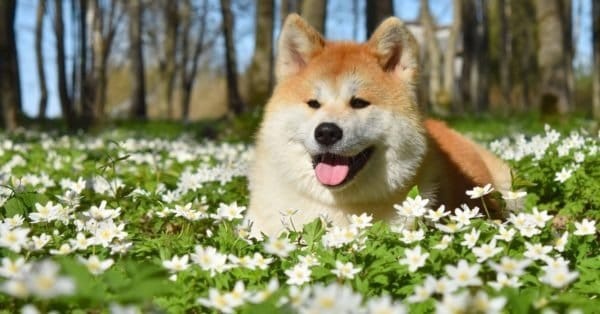 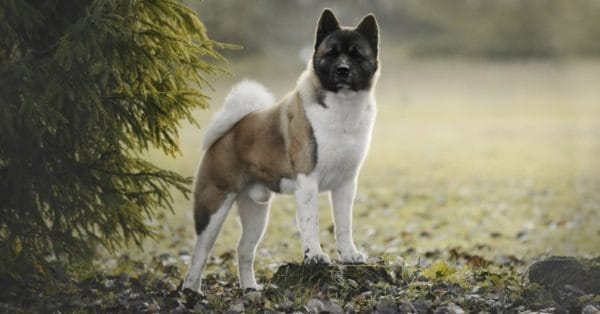 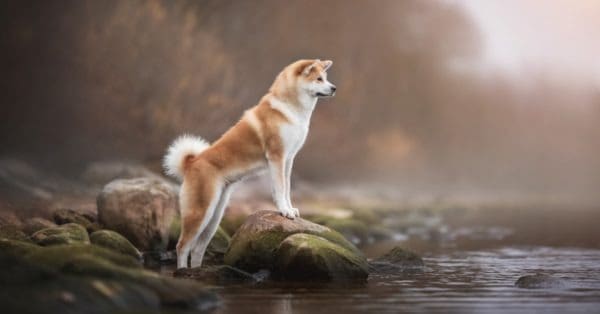 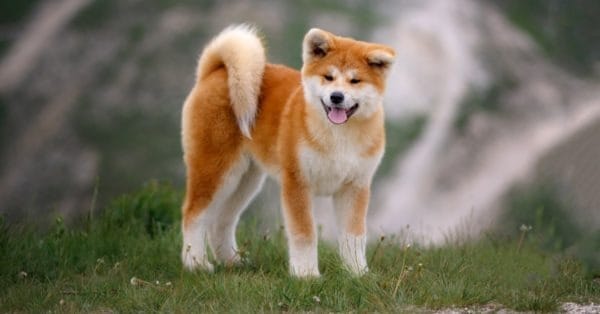 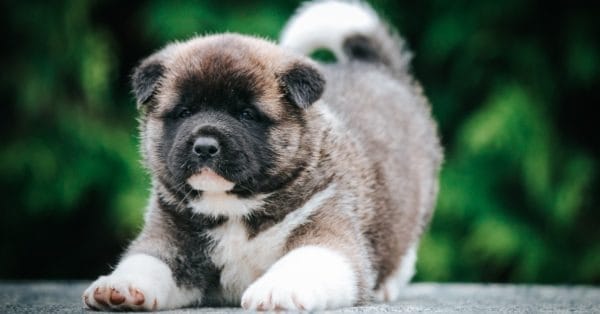 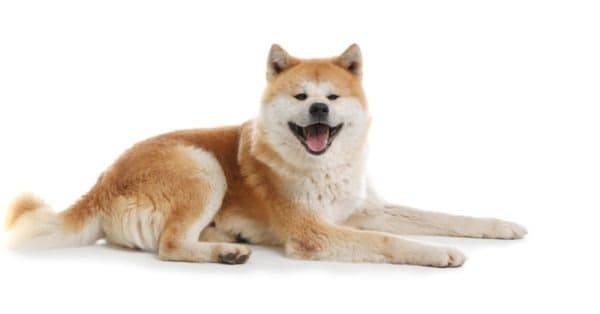 View all of the Akita images!

This post about the Akita may contain affiliate links to our partners. Purchasing through these helps us further the A-Z Animals mission to help us educate about the world’s species so we can all better care for them.

The Akita is a large, burly working/hunting dog that emerged at some point in the 17th century from the mountainous regions of northern Japan. Named after the Akita prefecture from which it originated, this breed was once kept exclusively by the imperial family and the court as a powerful hunting dog. After being introduced to the common people, the Akita became woven into popular culture and mythology as the national dog and symbol of its native country. A gift of an Akita figurine is intended as a symbol of long life and happiness upon the birth of a newborn child.

The Akita is an example of a spitz: a wolf-like dog with dense, thick fur and pointed ears and muzzle. Other characteristics of the Akita include a fox-like face, a thick, furry tail that curves back over its body, and webbed toes to help it walk on the snow. Following the occupation of Japan in the 1940s, returning American GIs introduced the breed into the United States, where it gave rise to a separate mix, the American Akita. While the Japanese Akita Inu only exhibits a narrow range of colors (such as brindle, red fawn, and black and grey) the American Akita has a much wider and more expressive appearance. Except in the United States, most organizations consider them to be a separate mix rather than a pure breed Akita.

3 pros and cons of owning an Akita

The Akita is a large dog with a big bone structure and a muscular build. Here is a more complete breakdown of its size:

The Akita is a generally healthy breed, but it does have some problems (especially those associated with the large frame) that may limit the life expectancy to about 10 years. It is somewhat prone to progressive retinal atrophy (in which the retina starts to degenerate), hypothyroidism (lethargy, obesity, hair loss, etc resulting from low production of the thyroid hormone), and hip dysplasia (misalignment between the thighbone and hip joint).

One of the breed’s other peculiarities is gastric dilatation-volvulus, also commonly known as bloat. Although this may not sound serious, it is actually a life-threatening condition, because the stomach can suddenly become twisted, making it impossible to expel air or gas. You should watch out for signs of this condition, including an enlarged abdomen, heavy salivation, weakness, rapid heartbeat, and retching without vomit.

Like many breeds, the Akita is also susceptible to cancer, skin conditions, ear infections, autoimmune disorders, kidney disease, and drug sensitivities. A good breeder and/or vet can screen for some of these problems early on.

To sum up the most pressing health issues:

The Akita is a strong, independent, willful dog with a dignified bearing and courageous personality. This can often lead to territorial behavior and distrust or indifference of strangers. It can also act aggressively toward other dogs, particularly those of the same sex. Fortunately, the Akita has a natural tendency to be fiercely loyal to its friends and owner, and if it’s properly trained and cared for, some of the most unappealing traits can be tempered with time.

Since this was bred to be a working dog, the Akita adjusts well to outdoor spaces and does best when it has a task to perform. But as a guard dog, it’s also easily acclimated to indoor living. This breed is not necessarily recommended for first-time dog owners or anyone who wants a low maintenance companion, but if you’re willing to put in the time, it can give a lot back.

How to Take Care of the Akita

The Akita is a high maintenance breed that takes time and effort to care for. Especially if you obtain this dog as a puppy, this breed will have different needs throughout its lifetime that require attention. You should be proactive about identifying and working out problems with the dog’s health and behavior.

A typical adult Akita requires about 3 to 5 cups of high-quality dog food every day, though the exact amount depends on the dog’s age, size, activity level, and metabolism. Experts suggest you should switch to a less calorie-dense food after the age of seven in order to prevent kidney disease. Occasional dog treats can also help your dog with training.

The Akita has a rather thick double coat of fur that requires brushing at least once a week. Although not a regular shedder, it does have two periods throughout the year in which the hair will shed in large clumps, requiring particularly frequent brushes. The Akita is very good about keeping its fur clean, but you should endeavor to trim its nails, clean its ears, and brush its teeth on a regular basis to maintain proper health and hygiene.

The Akita is a very alert and intelligent breed with an independent nature. Although this stubborn streak will sometimes interfere with training, the Akita is very responsive and eager to learn new things. It responds best to calm but assertive training methods that make it clear you’re in charge without alienating it. However, this breed needs to be properly socialized at an early age, or else it might exhibit anti-social behavior later in life.

The Akita is an energetic breed that requires about 30 minutes to an hour of moderate exercise per day. Jogs, brisk walks, or playtime in a large space (particularly a fenced yard) should be sufficient to burn off its excess energy, while fun tricks and tasks can delight both dog and owner. It is a good idea to keep its exercise routine varied and engaging. Otherwise, it might grow bored and restless, which can lead to digging, chewing, or barking. You also should not let it off the leash often, or else it might chase after smaller animals.

As puppies, the Akita requires some special care and plenty of high-quality food to support its growing body. It is most susceptible to bone disorders between the ages of four and seven months, when it experiences a rapid growth spurt. High impact exercise or play on hard surfaces may place stress on the dog’s joints until it grows to about two years old. Early checkups at the vet are a necessity for this breed of dog.

The Akita does enjoy the presence and affection of children, but it might not be suitable for all family situations. Younger children, in particular, might have poor interactions with this breed. They can be overwhelmed by the dog’s enormous size, while the Akita in turn might not tolerate mistreatment at the hands of young children. This breed does best in homes with older, more responsible children.

Dogs Similar to the Akita

If you are a fan of the Akita, then you might want to check out the following breeds:

The Akita is well-known throughout the world for its endearing temperament and loyal personality. A particularly loyal dog called Hachiko became the most famous Akita of all time after waiting nine years by a train station for the return of its dead owner in the 1920s. Besides being immortalized by a statue, its story was also adapted into the film “Hachi: A Dog’s Tale” starring Richard Gere. Famous owners include Helen Keller, Sarah Michelle Gellar, Henry Cavill, and the boxer Evander Holyfield.

Popular Names for the Akita

If you want to give your dog an authentic Japanese name, then these are some of the top picks (the first five are male, the next five are female):

Are Akitas herbivores, carnivores, or omnivores?

Akitas are Omnivores, meaning they eat both plants and other animals.

What Kingdom do Akitas belong to?

Akitas belong to the Kingdom Animalia.

What class do Akitas belong to?

Akitas belong to the class Mammalia.

What phylum to Akitas belong to?

Akitas belong to the phylum Chordata.

What family do Akitas belong to?

Akitas belong to the family Canidae.

What order do Akitas belong to?

Akitas belong to the order Carnivora.

What type of covering do Akitas have?

Akitas are covered in hair.

What genus do Akitas belong to?

Akitas belong to the genus Canis.

What are some distinguishing features of Akitas?

How many babies do Akitas have?

The average number of babies an Akita has is 7.

What is an interesting fact about Akitas?

What is the scientific name for the Akita?

The scientific name for the Akita is Canis lupus.

What is an Akita?

The Akita is a big, strong working/hunting dog that originated from northern Japan. It has a loyal and courageous personality that has earned the affection of many owners around the world.

What is the difference between an Akita vs. Shiba?

The Akita and Shiba Inu are two of the six spitz breeds native to Japan. But whereas the Akita is the largest Japanese spitz, the Shiba Inu is the smallest breeds, weighing only about 22 or 23 pounds. This makes it better suited for apartment living. Otherwise, both breeds have similar behaviors.

What is the price of an Akita?

What does Akita mean?

The name of this breed derives from the district of Akita in northern Japan from which it originated.

The Akita is a good breed for families with older children, less so for families with smaller children. It also has the tendency to chase small animals around and exhibit some aggression toward other dogs, so you should be careful about introducing this breed into your home if you already have pets.