Click through all of our Australian Bulldog images in the gallery. 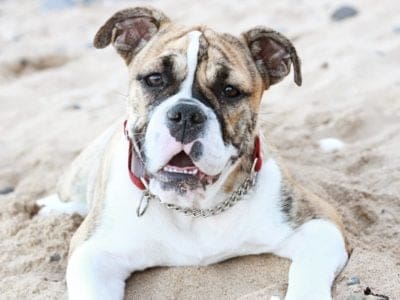 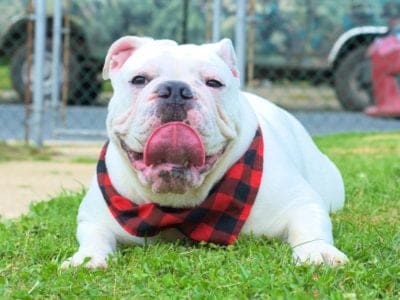 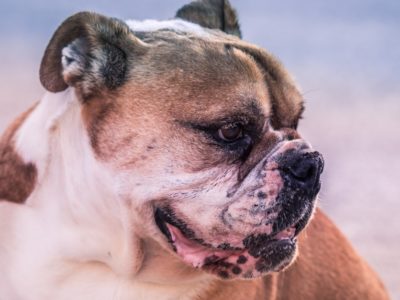 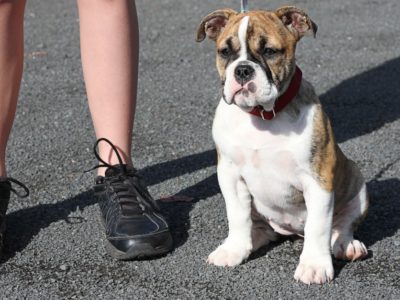 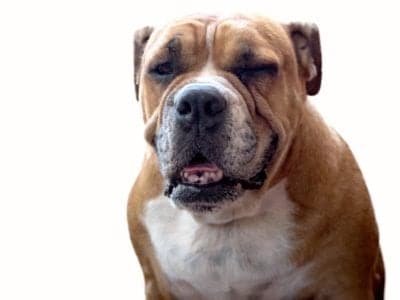 View all of the Australian Bulldog images!

The Australian bulldog is an exceptional pet. Among its delightful characteristics are fierce loyalty, intelligence and its undeniably sweet nature.

The Aussie dog has an appearance and similar temperament to its American relative. What differs is the Down Under version is as much Boxer and Bullmastiff as American bulldog.

The Aussie dog will make a great addition to any household.

The history of the bulldog goes back to 5th Century England. Over the following hundreds of years, breeders created one mix after another to design different types of bulldogs. Here are a few of the more popular crossbreeds.

What is the difference between an Australian Bulldog and an English Bulldog?

The cousins are as similar as they are different. See out chart above to get more information.

Health and Entertainment for your Australian Bulldog

The French bulldog, or Frenchie, is a highly popular big dog in a miniature body. These dogs are famous for their unique bat ears, warmth, and engaging personalities.

A crossbreed of the American Pit Bull Terrier, the American bulldog, and the Bullmastiff, the Olde English is extremely athletic and loaded with stamina.

Breeders crossed Bullmastiffs, English Bulldogs, English Staffordshire Bull Terriers, and Bull Terriers in hopes of creating a healthier bulldog. This dog’s face isn’t as compact as its cousins. Like other bulldogs, the Victorian is extremely protective and loyal.

The Catahoula is a hybrid of the American bulldog and Catahoula Leopard Dog. They’re athletic and energetic and need more exercise than the rest of the bulldog family.

Bred to be a catch dog, the Alapaha Blue-Blue chased and caught cattle and other animals. They are playful and devoted. With proper socialization training, they enjoy hanging out with the kids.

The Australian Bulldog is a great dog for companionship. But nothing’s perfect. Here are a few good things as well as a few bad things about having this animal in your home.

On average, the male Australian Bulldog is between 18 and 20 inches tall. They usually weigh in the vicinity of 60 to 78 pounds. The female is slightly shorter, standing 17 to 18 inches while weighing between 50 and 61 pounds.

Every potential owner should be aware of the most common health problems their Aussie dog may encounter.

Most bulldogs suffer from Brachycephalic syndrome. It’s a respiratory health issue that interferes with the dog’s breathing. Science attributes the condition to shorter, pushed-in faces.

Separation anxiety is common with the breed. They’re also persistent and stubborn which will make training a chore. You’ll have to take a firm hand with the dog, committing to a regular regimen of consistency and patience. Get started when these dogs are puppies.

How To Take Care of an Australian Bulldog

The Australian Bulldog needs companionship. It won’t matter how dog-friendly the environment if you’re not around, they won’t be happy. From puppies through adulthood, if left alone for too long, your pooch will stress or get bored. That can produce extended barking sessions or other bad behavior.

They might be more susceptible to you not being around if there’s another pet to keep them occupied. But even that won’t hold up for extended periods. If you’re a single owner, see what you can do to minimize the dog’s time alone.

Unless otherwise specified by your vet, the Australian Bulldog doesn’t have any unique dietary needs. They’re fine with standard OTC dog foods. It’s better to lean toward high-quality foods though. Categorized as a medium-sized crossbreed so feed them accordingly.

You do want to keep in mind that these aren’t particularly active dogs. That makes them prone to diabetes and obesity if their metabolisms aren’t balancing weight and caloric intake. You have to make sure your pooch gets its daily exercise and you avoid overfeeding.

Feed puppies three to five times a day. They naturally burn off calories as they’re likely to run around and play. Like humans, as they get older, their metabolisms will slow down and the dog will burn calories slower.

The medium-sized adult dog can enjoy between two and 2 2/3 cups at their meals which should be dispensed twice a day. Mature dogs get a little less than adults.

Good grooming is critical to your dog’s appearance, health, and well-being. The coat can get matted and will make your pooch uncomfortable. Healthy coats shed less and minimize threats like ear infections and fleas.

The Aussie Bulldog has a fine, short coat with a smooth feel. He’s an average shedder and this is manageable with a firm bristle brush. The coats are shades of brindles, pied colors, reds, and fawns. The tri-colored and black coats usually come with a BBD lineage as they aren’t common.

If you’re not brushing, the dog’s breath will be bad. So, you need to pay attention. If their coats aren’t smooth, it’s time to brush and trim. It’s time to cut the nails if their feet click as they walk.

Determine how often you groom based on what you see. We do recommend professional grooming as often as you can afford it.

As the Aussie bulldog loves people, training can be quite manageable. But it can still take some time and patience. Though intelligent, they take their time learning.

With patience and encouragement, keep them engaged and it shouldn’t be too much of a problem. Take note that this Aussie mix is stubborn and negative reinforcement only gets you a dog that withdraws. The Aussie doggy’s famous for, upon not appreciating your approach to training, plopping down, and refusing to participate.

Expose your puppies to people, places, dogs, cats, and other animals. This bulldog leans more towards solitude. But it remains important you get them used to strangers, family, playmates, and other animals that are a part of your lifestyle. Otherwise, you’ll find them turning into the grumpy dog their faces hint at.

The Aussie Bulldog has no desire to hop, skip and jump all the time. They’ll keep up with you. You may even convince the dog to engage in strenuous play as long as they enjoy your company. But these dogs are about chillin’.

Whether English Bulldog or English Staffordshire Bull Terrier, a bulldog needs regular play and mental exercise. If they don’t get it, expect them to pick up destructive habits like chewing chair legs. If you have the time for exercise or daily walks, get yourself a dog walker and let them keep doggy calm and happy.

Australian Bulldog puppies are adorable. A little pug miniature that captures the heart.

The litter of an Aussie Bulldog will fall between four to nine puppies with seven being the average. Puppies will be impressionable and ready to learn.

Bulldogs are fiercely independent and have a lot of energy. You want to get a handle on both sooner than later. Get the puppies early training and socialization. A little a day will be beneficial.

You want to get an Australian Bulldog who’s comfortable being around you and others in the household.

Always monitor small children and puppies. Puppies may nip out of instinct. Young children may be a little aggressive. Show older children how to be a leader in the dog’s presence even as they play.

If you have an interest in the Australian Bulldog, but you’re not sure they’re the best choice, here are other breeds similar to the dog you can take a look at.

Here are three popular names for the Australian female and male bulldog.

View all 76 animals that start with A

What is an Australian Bulldog?

The Australian Bulldog is a crossbreed selectively designed for the Down Under environment.

The Aussie Bulldog loves people and being a companion. They’re patient, good-natured, and love their family.

Do Australian Bulldogs have lockjaw?

No, this is an unfounded legend. No dog has the capacity to lock its jaw.

How much are Australian Bulldogs worth?

These are expensive breeds. If you’re lucky, maybe you can adopt, finding one in a shelter or rescue. Otherwise, look forward to spending upwards of $3,500 (AUD$3,223).

What is the lifespan of an Australian Bulldog?

Without serious health problems, the Aussie dog can live up to 12 years.

How big do Australian Bulldogs get?

This bulldog is of medium size and grows up to 20 inches. 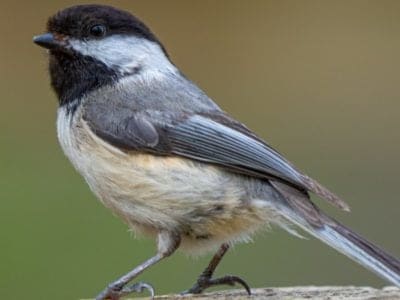 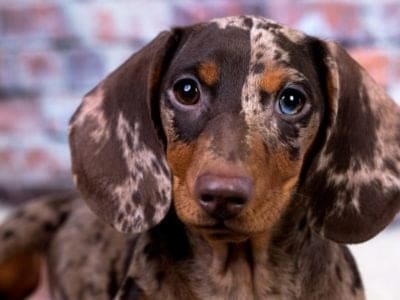