Temperament
Loyal, outgoing, and friendly
Training
Should be trained from an early age and they are easy to train but it takes time
Diet
Omnivore
Average Litter Size
7
Common Name
Australian Shepherd
Slogan
Sweet, faithful and affectionate!
Group
Herd Dog

Click through all of our Australian Shepherd images in the gallery. 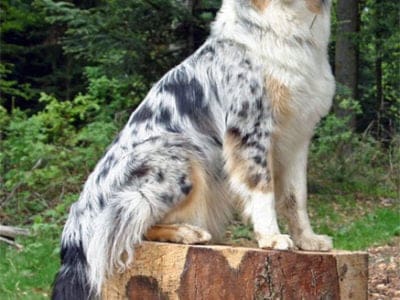 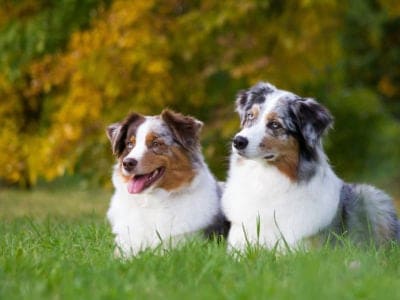 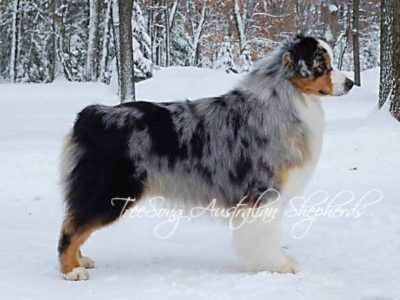 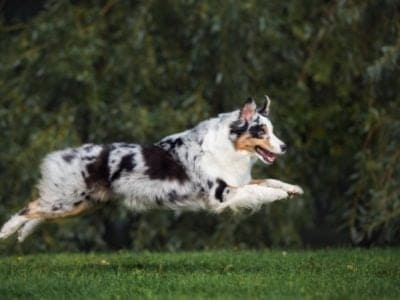 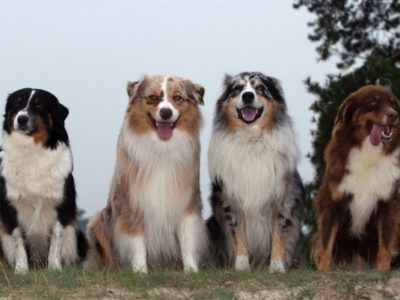 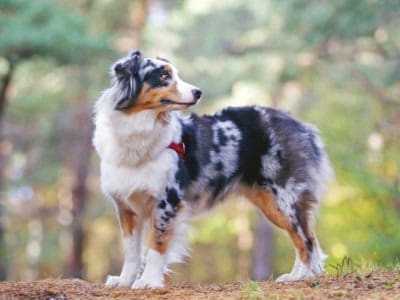 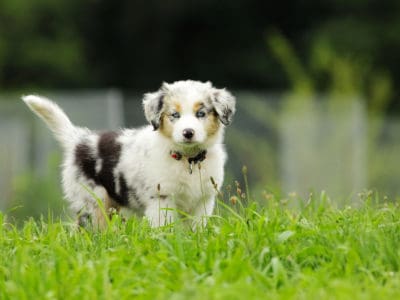 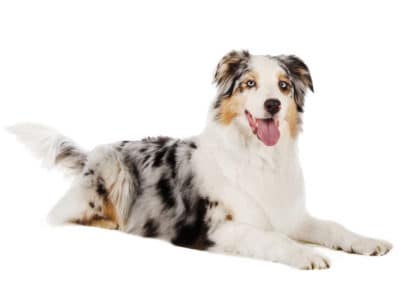 View all of the Australian Shepherd images!

The history of the breed dates back to the early 19th century when Basque people from northern Spain emigrated to the wide-open lands of Australia with their faithful companions, the Pyrenean Shepherds. These dogs were then crossed with several British imports (such as the Border Collie) to create an entirely new breed. After Basque people arrived in California, American ranchers took a liking to the breed and called it the Australian Shepherd.

The breed is truly an international success story, but it has a special place in American hearts since it became famous in the West. According to the American Kennel Club, it is still one of the more popular breeds in the United States. Mini and toy versions, along with the Aussie mix, have also become very popular. Other breeds with which it’s mixed include the golden retriever, poodle, corgi, and husky.

3 pros and cons of owning an Australian Shepherd

The Australian Shepherd is a medium-sized dog with a strong build. By comparison, the mini version is around 20 to 35 pounds smaller than the standard Aussie breed, while a toy Aussie is about 12 to 17 pounds large. Here is a breakdown of the standard sizes:

The Australian Shepherd is a generally healthy breed, but there are a few big health issues to look out for. It is prone to several types of eye diseases, the most common of which is cataracts. This is the disease that causes a cloudy appearance in the eye. Other common health issues include hip or elbow dysplasia (a genetic abnormality that causes development problems in the joint), distichiasis (in which additional eyelashes grow around the lid and irritate the eye), deafness, hypothyroidism, allergies, drug sensitivities, and cancer.

The Aussie is also the dog breed most likely to be afflicted with epilepsy. Because some of these health conditions arise from genetic abnormalities (particularly in merle to merle breeding), it is a good idea to buy the dog from a breeder that screens for these kinds of problems early. To sum up things briefly, these are the most common health problems for this breed:

The Australian Shepherd exhibits many excellent traits that should appeal to a highly engaged owner. An ideal member of this breed has a very outgoing and friendly personality that’s keen to express itself. It should also be attentive to its owner’s commands and desires. As long as its energetic and loyal behavior is put to good use, this breed is a model dog with a good sense of self-control and diligence. Its patient demeanor also makes it a great therapy dog, drug detector, and search and rescue dog. Toy and Mini Aussies both exhibit similar behaviors as the standard breed.

Health and Entertainment for your Australian Shepherd

How to Take Care of Australian Shepherds

The Australian Shepherd is a moderate to high maintenance breed that requires quite a lot of grooming, exercise, and attention. You should only buy this breed if you have the time, inclination, and ability to fully take care of it. You will get the best results if you train and socialize this breed early as a puppy.

A fully grown adult Aussie thrives on around 1.5 to 2.5 cups of high-quality dog food split into two separate meals every single day. It is a good idea to find specialized food for the dog’s appropriate age (puppies, adults, or seniors). Because of its tendency to gain weight, you should carefully monitor the dog’s calorie consumption and give treats only sporadically to support its training.

The Australian Shepherd has a thick double-layered coat that does require some attention. For most of the year, this breed only requires weekly brushing. But in the shedding season, the fur needs to be raked once every two or three days, followed by a quick cleanup with a wire brush. Because of its frequent outdoor adventures, the dog may require frequent baths to prevent dirt from accumulating. You should also try to keep its nails trimmed regularly.

The Australian Shepherd is a highly trainable and obedient dog that takes easily to various skills, commands, sports competitions, jobs, and almost any other task you can imagine. Perhaps no other breed is quite as eager to please. One of the things you should look out for is the dog’s herding instincts. If you don’t want it herding, then you should spot the signs (such as chasing and heel sniffing) before they become more serious.

You can eliminate undesirable behavior by gently telling your dog no or walking away. You can also redirect its behavior toward more acceptable activities. Do not punish your dog by yelling at it or lashing out, even if it’s being stubborn. This may discourage it or make it more distrustful of you. You can reinforce the dog’s behavior with treats or clickers. Professional training is also recommended for more serious owners.

The Australian Shepherd is a high-energy breed that requires at least an hour or two of exercise every single day. If you already have a large yard, then you should be set, but any wide open space should suffice, and the dog should be overjoyed to come with you on walks, hikes, or biking trips. It also loves to perform tricks, agility competitions, and herding tests. The dog’s long double coat should insulate it from heat and cold, but it can become rather uncomfortable in extreme temperatures. On an exceptionally warm day, you should make sure the dog is comfortable and has enough to drink.

There are a few things to keep in mind with your new dog. Puppies should be exposed to as many different situations and people as possible, because if it’s not properly socialized from an early age, the Australian Shepherd may become wary of strangers. You should also give it an exam at the vet as soon as possible to screen for any early health problems.

The Australian Shepherd is a loyal companion and excellent playmate, but the first introductions with your children should be carefully thought out and managed. Because of its herding instinct, the Australian Shepherd may at first have a tendency to chase or nip new people it encounters. Once the dog grows accustomed to your children, though, then they will get along very well with each other. In fact, this breed may become quite protective of your children. But you should teach your children never to tug at the dog’s fur or disturb it while it’s trying to eat. The Australian Shepherd can tolerate rough play, but it doesn’t want to be annoyed or harassed. It is also never a good idea to leave the dog alone with young children in case interactions go poorly.

Dogs Similar to the Australian Shepherd

The Australian Shepherd is just one of many different types of herding dogs. Here are some of the closest breeds in terms of appearance, behavior, and temperament. Some of these breeds also have their own Aussie mix.

The Australian Shepherd is one of the most famous breeds in the world. It makes frequent appearances in both fiction and popular culture.

Popular Names for the Australian Shepherd

According to the website Rover.com, these are the 10 most popular names for the Australian Shepherd:

Is the Australian Shepherd a good family dog?

The Aussie is a loyal and playful companion, but it may take some time for the dog to become accustomed to your family. Introduce the dog to your children gradually and let it know through gentle disapproval where the boundaries are.

Do Australian shepherds shed a lot?

The Australian Shepherd is a moderate shedder for most of the year, but it will need extra care in the shedding season.

Can Australian Shepherds be left alone?

Australian Shepherds should not be left alone for long periods of time. If the dog is separated from its companions, then it may start to become anxious. This can find an outlet in destructive behavior around the home.

Are Australian Shepherds easy to train?

Yes, like all herding dogs, the Australian Shepherd is easy to train. It takes to various tasks and competitions with aplomb.

The Australian Shepherd has a medium-sized build, medium to long hair, and a straight back. The most common colors are solid black, solid red, blue merle, and red merle with various combinations of white and copper markings all along the body. Another appealing characteristic is the piercing brown or blue eyes, which once gave this breed the nickname of “ghost-eye dog.” It is not uncommon for this breed to have two different-colored eyes. Most dogs have a full tail, while a few have a bobbed or partially bobbed tail.

Australian Shepherds are Omnivores, meaning they eat both plants and other animals.

What Kingdom do Australian Shepherds belong to?

What class do Australian Shepherds belong to?

What phylum to Australian Shepherds belong to?

What family do Australian Shepherds belong to?

What order do Australian Shepherds belong to?

What genus do Australian Shepherds belong to?

What type of covering do Australian Shepherds have?

Australian Shepherds are covered in Hair.

How many babies do Australian Shepherds have?

The average number of babies an Australian Shepherd has is 7.

What is an interesting fact about Australian Shepherds?

What is the scientific name for the Australian Shepherd?

The scientific name for the Australian Shepherd is Canis lupus.

What is the lifespan of a Australian Shepherd?

Australian Shepherds can live for 15 years.