Click through all of our Blue Jay images in the gallery. 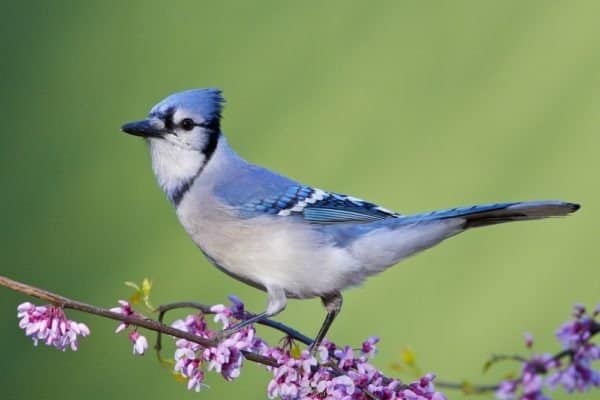 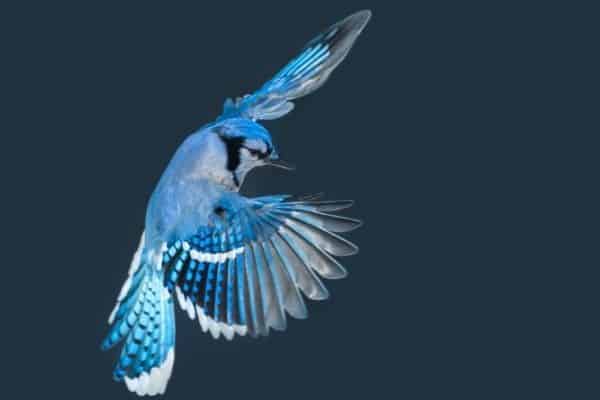 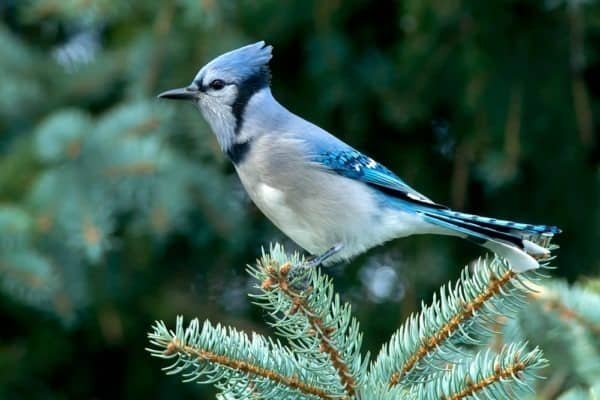 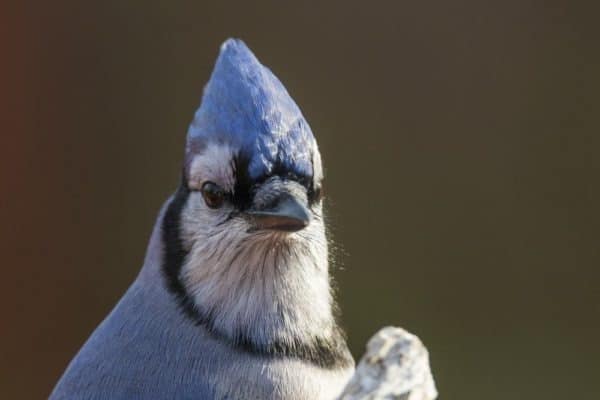 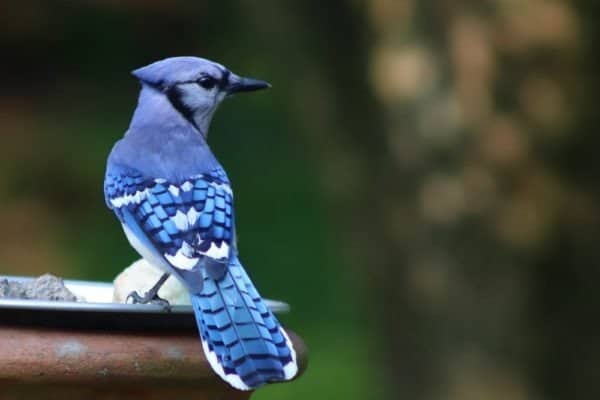 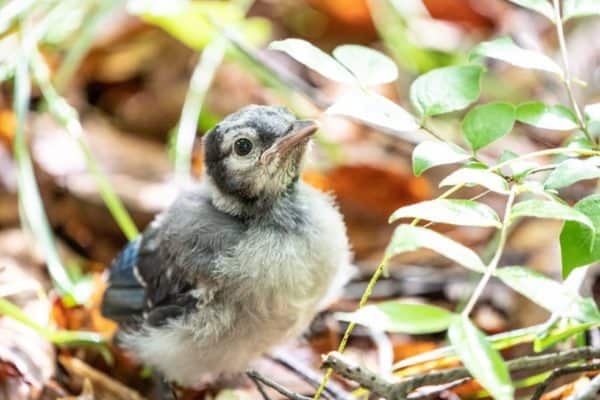 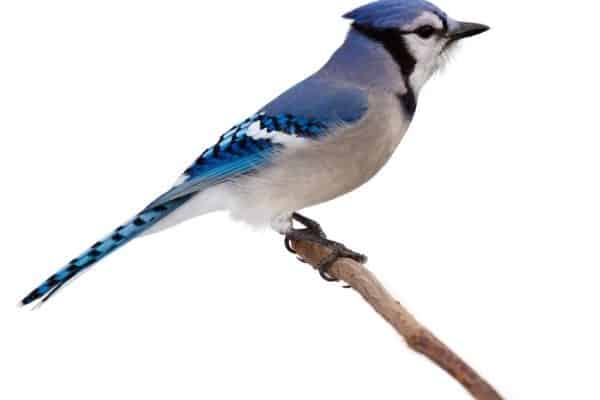 View all of the Blue Jay images!

The Blue Jay’s unique personality and the affinity for using its own name as a bird call are part of what makes the blue jay so expressive.

Mark Twain, a fan of the beautiful and elegant blue jay, once said, “There’s more to a jay than any other creature. You may call a jay a bird. Well, so he is, in a measure, ’cause he’s got feathers on him and he don’t belong to no church perhaps, but otherwise he’s just as much a human as you and me.”

A passerine bird, the blue jay is native to North America and can also be found through the eastern and central parts of the United States. Some of the populations of this bird are even known to be migratory. The Blue Jay is a bird known to be a forest dweller and is highly adaptable as well as intelligent in nature. They are known to be able to imitate hawk calls and are especially famous for their “jay jay” call.

The blue jay goes by the scientific name Cyanocitta cristata and belongs to the family Corvidae. It comes from the class of Aves and the kingdom Animalia. They get their name blue “jay” from the noises that they are known to make that sound exactly like it.

Symbolism of a Blue Jay

The symbolism of the blue jay bird is vibrancy, intellect, and clarity. They are known to be songbirds who love singing in their free time and their creativity is well known too. These birds are often used as a totem, but it doesn’t quite have the symbolism that Old World birds do since they are native to the northern hemisphere. Still, in the Sioux, Chinooks, and Coast Salish tribes, it has found a home in many myths and stories.

European folklore has a special place for blue jays as well. Many people believe that the bird is tricky, imitating other creatures and preserving the secret location of its own nest. One story, which is told by Europeans and Americans alike, suggests that the original blue jay was much bigger than the bird known today. As the legend goes, the large Jay was once kept captive by people who used it to help them plow their lands. To avoid ever being entrapped and enslaved again, the bird urged the Great Spirit to make him a fraction of his size. The details of his chest are allegedly the remnants of the marks he received while plowing for humans.

They have also been linked to Great Oak trees for the seeding they perform, leading many Celtic people to see them as a reincarnated soul of the Druids. As a spirit animal, the blue jay stands for longevity in relationships, whether they are of a romantic or platonic nature. Perhaps this is due to their monogamous habits.

As the name suggests, this bird is blue. However, the color comes from a brown pigment that is present in their feathers. The bird is about 9 to 12 inches in height and merely weighs around 2.5 – 3.5 oz.

The peak of its head is blue while the color of the fur changes to grey or white towards the throat of the bird and this grey or white coat continues to its chest and further to its belly. The crest on its head is greyish blue, and the bird has black and white bard on its tail and wings – which make it uniquely distinguishable. A black band that looks like a necklace runs across its lower throat.

Behavior wise, the blue jay is known to be an aggressive creature and is a territorial bird. These birds do not shy away from attacking any possible intruders or predators that they sense any danger from. Even though they are aggressive, they are social and usually exist in groups.

This bird is also known to be very vocal and often makes different noises for the sake of communication. It is particularly famous for its ‘jay-jay’ noise which also gives it its name. Some other noises that this bird makes include growling, chattering, and whistles.

These birds are most commonly found in the eastern and central parts of North America. However, they are also known to be extending their range to the northwest. They also prefer coniferous forests and can also be found in southern Canada besides the parts of the United States.

Usually, the blue jays are found in low forest areas and this bird likes to live in beech and oak trees. They can regularly be found in city parks and can be easily recognizable as they are one of the most colorful and loudest birds and is usually very unlikely to miss. it. It is also very common to spot the bird in heavily residential areas.

Known to be largely vegetarian, the diet of these birds usually feeds on nuts, acorns, and seeds. However, their diet also comprises beetles, grasshoppers, and caterpillars. Besides that, these birds are also known to eat eggs and nestlings. This makes them omnivorous.

Like any other animal or bird, these birds are an important part of the ecosystem. Several predators within the bird family even pose a threat to the blue jay’s existence. Some of them include falcons, hawks, and owls.
Crows, cats, squirrels, raccoons, and other birds will feed on the nestlings or baby blue jays which is a practice the blue jays have become infamous for.
Other dangers that the blue jays are threatened by include man-made structures that these birds could collide with. Meanwhile, some viral and bacterial diseases could also be the cause of death for these birds. The IUCN has, however, put these birds under the “least concerned” category.

Blue jays are known to be birds that for pairs that mate for life until they die and show exemplary partnership skills in parenting their nestlings. The female jays usually pick the male partners to mate with. The process starts around late winter.

After the baby has been conceived, the pair starts building multiple partially completed nests for the unborn offspring. After building a few nests, the pair usually settles in one location. The nests are finally readied with the help of moss, twigs, foliage, leaves, and barks. The gestation period in these birds usually lasts from about 16 to 18 days.

The female blue jay lays three to five eggs after which she sits on them for incubating them for a little over two weeks. During this time, she is fed and taken care of by the male blue jay.

After the egg hatches and the newborn is welcomed into the world, it stays in the nest for two months after which the parents and the newborn go stay with the rest of the family for a while. During this time, the male and the female blue jays together take responsibility to feed and take care of the baby.

Usually, blue jays live for seven years on average, However, they are known to exist for about 17 to 26 years in captivity.

The migratory habits of blue jays bring them up and down the Atlantic coast (along with the Great Lakes), but little else is known about where they go.

Yes, blue jays are known to be aggressive and do not shy away from attacking any intruders or predators. They however are also social creatures who mostly exist in groups.

Blue jays make a variety of sounds for communication. They are, however, known for their “jay jay” sounds. Besides that, they, whistle, chatter, and growl to communicate.

As the name suggests, these birds are blue that mostly sits at the top of their heads. The fur becomes white or grey towards the neck and continues to their chests and further to their bellies. They have a black ‘necklace like’ band that runs across the lower parts of their necks. They also have black and white bards on their wings.

What does a blue jay symbolize?

The blue jay’s symbolism is known to be that of clarity, intellect, and vibrancy.

Blue jays are vegetarian and feed on nuts, acorns, and seeds. However, in some cases, they also eat grasshoppers, caterpillars, and beetles. Therefore, they are omnivores.

Are these birds migratory?

Some of the blue jay populations are known to be migratory. However, their destination remains unknown.

What Kingdom do Blue Jays belong to?

What phylum do Blue Jays belong to?

What class do Blue Jays belong to?

What family do Blue Jays belong to?

What order do Blue Jays belong to?

What type of covering do Blue Jays have?

Blue Jays are covered in Feathers.

What type of covering do Blue Jays have?

Blue Jays are covered in Feathers.

Where do Blue Jays live?

In what type of habitat do Blue Jays live?

What are some predators of Blue Jays?

What is the scientific name for the Blue Jay?

The scientific name for the Blue Jay is Cyanocitta cristata.

What is the lifespan of a Blue Jay?

Blue Jays can live for an average of 7 years.

What is a baby Blue Jay called?

A baby Blue Jay is called a nestling.

What is the biggest threat to the Blue Jay?

The biggest threats to Blue Jays are predators and collision with man-made structures.

How many Blue Jays are left in the world?

There are 13 million Blue Jays left in the world.

How many babies do Blue Jays have?

The average number of babies a Blue Jay has is 2 to 7.

What is an interesting fact about Blue Jays?

How fast is a Blue Jay?

A Blue Jay can travel at speeds of up to 25 miles per hour.