Click through all of our Boston Terrier: Complete Pet Guide images in the gallery. 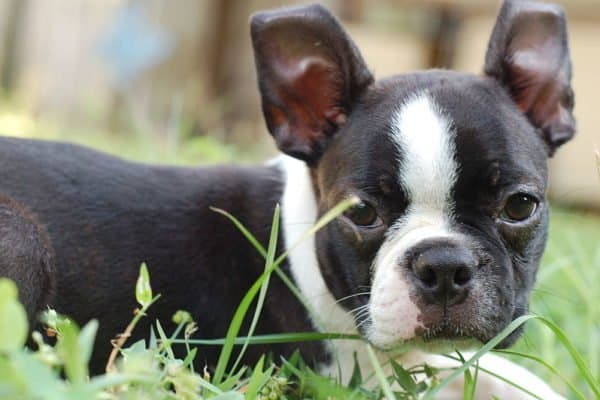 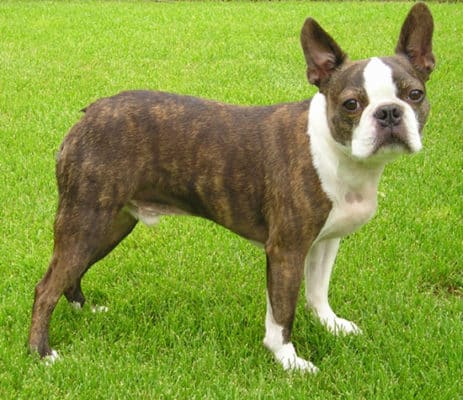 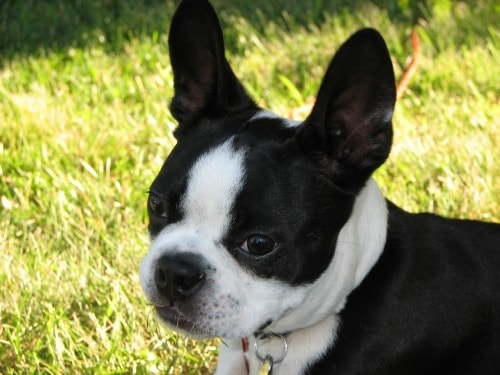 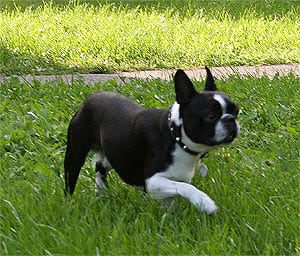 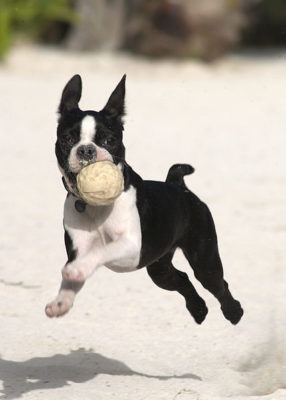 View all of the Boston Terrier: Complete Pet Guide images!

Boston Terriers are small dogs with black and white coloring.

In the 1870s English Bulldogs and English White Terriers (now extinct) were crossbred, making a dog known as a Hooper’s Judge. In the years following, these dogs were crossbred with English Bull Terriers, Pit Bull Terrier, Boxers, and French Bulldogs. This crossbreeding gave us the animal we now know as the Boston Terrier.

Boston Terriers have a pretty even temperament. They are friendly and affectionate animals that make a great family pet. They are very active, love to play, and can be easily trained.

Boston Terriers are small dogs. Males have an average height of 17 inches and females are just a touch shorter with an average height of 16 inches. There are three different weight categories that Boston Terriers may fall into. They are: under 15 pounds, between 15 and 20 pounds, and between 20 and 25 pounds. Adult males typically weight between 15 and 25 pounds, while adult females are typically between 10 and 20 pounds.

A Boston Terrier puppy only weighs about half a pound when it is first born. However, they grow pretty quickly reaching average of nearly 9 pounds at the age of 4 months and nearly 20 pounds at 8 months. By the time they are 1 year old, Boston Terriers are fully grown.

Another possible health concern is Patellar Luxation. This is a slipped knee cap that makes it difficult for Boston Terriers to walk. At first, dogs won’t be in pain when they walk, but if left untreated, the knee cap will become inflamed, which might cause your Boston Terrier to experience pain. This is a genetic condition that sometimes requires surgery to treat.

Boston Terriers also suffer from eye injuries since their eyes protrude from their head. They may scratch their eyeball or come down with pink eye, or conjunctivitis. In addition to eye injuries, Boston Terriers may get cataracts. This is another genetic trait that sometimes shows up in puppies as young as eight weeks old.

Some Boston Terriers also get Keratoconjunctivitis Sicca, which is dry eye. If your Boston Terrier has this condition, they won’t be able to make enough of their own tears to keep their eyes moist, which can lead to sores, itchiness, or even infections. Another potential eye problem to watch out for is glaucoma. Boston Terriers with glaucoma have a blockage in their eyeball which prevents it from draining. This can lead to too much pressure, which can damage their optic nerve.

Hemivertebrae is a condition in which Boston Terriers have improperly-shaped vertebrae in different sections of their spinal column. A corkscrew-shaped tail is often a sign of this condition.

Boston Terriers can also have allergies, most commonly skin allergies. This can cause them to lick, scratch, or chew themselves. Sometimes Boston Terriers may be allergic to specific foods or other items in their home or environment, such as pollen or cleaning products.

A final health concern in some Boston Terriers is deafness. This is another genetic condition that may be passed down to your dog. You’ll want to consult with your veterinarian if you think your dog is having trouble hearing you.

Remember, the most common ailments Boston Terriers may suffer from include:

Boston Terriers have a very friendly and social personality. They are loving and affectionate towards their owners. At times, Boston Terriers can be territorial and may display mildly aggressive behavior if they feel they or someone in their family is being threatened.

Boston Terriers also display playful traits. They are high energy and enjoy playing with their owners. A Boston Terrier’s traits and personality make them a good dog to have with children, particularly older children. Boston Terriers are often good around other dogs and cats. When possible, introducing them to other animals at a younger age is best.

How to Take Care of Boston Terriers

Boston Terrier puppy food: Boston Terrier puppies have a faster metabolism and require enough energy to help them grow. Because of this, puppies need to eat more times throughout the day than adult dogs do. Very young puppies (under 3 months) should eat between 4 and 5 times a day, puppies between the ages of 3 and 5 months should eat about three times a day, and once puppies get to be at least 6 months, they should be fine eating twice a day.

The food you choose for your puppy should be high in protein and should not have many grains (and only high-quality grains if you choose a food that is not grain-free). There are no specific allergens that are more likely to be a problem for Boston Terriers, but be sure to check your puppy for any signs of an allergic reaction when starting a new food. Also, avoid any foods that are too salty or sugary, since these can cause Boston Terriers to develop heart or weight issues.

Like puppies, adult Boston Terriers should be feed foods that have a good mix of proteins, fats, and carbohydrates. Look for foods that are rich in vitamins and minerals that will contribute to the overall health of your dog.

Boston Terriers do shed, but not as much as some other dog breeds. Weekly brushing can help you remove your dog’s loose hair and minimize the amount they shed. When grooming your Boston Terrier, you can use a grooming mitt, a soft-bristled brush, or other grooming tools.

Hair Remover: Perfect for long, short and curly haired dogs, cats, horses, and other pets, grooming the hair quickly, gently and effectively; The shedding hair sticks to the glove, making it easy to peel and throw hair away.

This upgraded pet grooming mitt for your Boston Terrier.

Because of their very eager-to-please personality, Boston Terriers can be easier to train than many other breeds. Ideally, you’ll want to start training your Boston Terrier from an early age and make sure they get exposed to different people, places, and situations while they are still young. Signing them up for an obedience class when they are still a puppy is also a good idea.

Boston Terriers need regular exercise, but not as much as some larger dogs. For most Boston Terriers, a few walks with you and some play time each day is sufficient. Some higher energy Boston Terriers may require a little more activity than this. Since Boston Terriers are very playful, a good way to help your dog get some exercise is to play with them by throwing a ball or other toy for them to retrieve.

Boston Terriers need regular exercise, but not as much as some larger dogs. For most Boston Terriers, a few walks with you and some play time each day is sufficient. Some higher energy Boston Terriers may require a little more activity than this. Since Boston Terriers are very playful, a good way to help your dog get some exercise is to play with them by throwing a ball or other toy for them to retrieve.

The average litter size for Boston Terriers is between three and five puppies. If you’re planning to adopt a Boston Terrier puppy, there are a few things you should do to get ready for the dog.

First, make sure you have an experienced and trustworthy vet you can bring your puppy to shortly after you bring them home. You’ll also want to have a conversation with your breeder about the health of the Boston Terrier puppy and if there are any specific health concerns you should be aware of. Find out as much as you can about the medical history of the puppy’s parents.

Next, puppy-proof your home. Move any shoes or other items that might be appealing for a puppy to chew up high so they won’t get ruined. Make sure there are no hazardous plants or toxic chemical anywhere the puppy will be able to get at them and look for anything else that could potentially endanger a young pup.

Finally, make sure you have everything you’ll need to welcome your new puppy home. This should include puppy food, food and water bowls, a leash and collar, dog beds, and toys. Plan to take at least a few days off work to stay home when your new puppy arrives. Taking care of a puppy is a lot like taking care of a baby; they need a lot of attention and care.

French Bulldogs, Pugs, and Mastiffs are other dog breeds that are similar to the Boston Terrier.

Popular names for Boston Terriers include:

There are many “famous” Boston Terriers that can be found across media and the entertainment industry.

View all 78 animals that start with B

How much does a Boston Terrier cost to own?

Boston Terriers can cost anywhere from $600 to over $4,000 when purchased from a breeder. However, the average price is typically in the $600 to $1,200 range. You’ll also want to make sure you budget for food, vet expenses, training, toys, and supplies, like leashes and food/water bowls. The average yearly cost for all of these items is about $1,600.

Are Boston Terrier good with kids?

Yes, Boston Terriers are good with kids. They are very friendly, affectionate, and playful. These traits along with their even temperament make them an excellent family dog.

How long do Boston Terriers live?

Boston Terriers live an average of 10 to 14 years.

What is bad about Boston Terriers?

While Boston Terriers are great pets overall, there are a few downsides to owning this breed. Some Boston Terriers can suffer from numerous health problems. If you don’t get your dog from a reputable breeder, you run the risk of them having more health issues that won’t be disclosed to you.

Another downside of owning a Boston Terrier is that they can be pretty gassy. They also make lots of wheezing, snorting, grunting, and snoring sounds. You’ll also want to plan for a few months to crate train your dog, which may be frustrating to some.

Do Boston Terriers bark a lot?

No, Boston Terriers don’t bark too often. If a Boston Terrier does bark, they generally make a lower woofing sound instead of a loud bark that some other dogs make.

Can Boston Terriers be left alone?

What is the difference between a Boston Terrier and a French Bulldog?

Boston Terriers are Omnivores, meaning they eat both plants and other animals.

What Kingdom do Boston Terriers belong to?

What class do Boston Terriers belong to?

What phylum to Boston Terriers belong to?

What family do Boston Terriers belong to?

What order do Boston Terriers belong to?

What genus do Boston Terriers belong to?

What type of covering do Boston Terriers have?

Boston Terriers are covered in Hair.

How many babies do Boston Terriers have?

The average number of babies a Boston Terrier has is 4.

What is an interesting fact about Boston Terriers?

What is the scientific name for the Boston Terrier?

The scientific name for the Boston Terrier is Canis lupus.