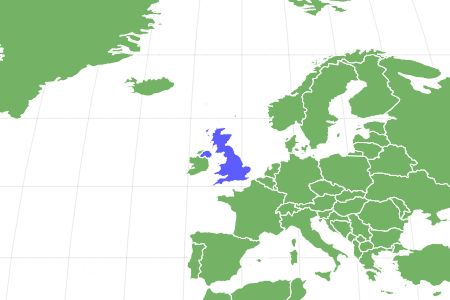 British Timber as a Pet:

View all of our British Timber pictures in the gallery.

View all of the British Timber images!

They are also called a Tamaskan dog or a Northern Inuit, which are all considered to be wolf look-alikes or wolf types. Their genetic line also includes the Alaskan Malamute, the German Shepherd, and the Siberian husky.

Originally, the purpose of a Timber dog was to establish genetic diversity, combining the DNA of the Utonagan and the Northern Inuit. In fact, they were only officially bred as recently as 2012, and their purpose was to create a dog that worked well within the family with the appearance of a wolf.

The breed can sometimes be aggressive, though they are loving and affectionate towards the family they live with but can also become over-protective for the owners often. They also have thick fur and undercoat.

As breeders continue to try different genetic features, this size and weight can change as time goes on.

British Timber tend to suffer from some health concerns, which is both a product of the Northern Inuit influence and the fact that breeders created this breed so recently. The most common health issues that they face can be traced back to the parents of the breed, like hip dysplasia. Lung issues also can impact them, which is fairly common in large breeds.

Health and Entertainment for your British Timber

Like other wolf dogs, there’s a significant risk of fleas, ticks, and other parasites, but these risks will largely depend on the area where the pet lives. Since the British Timber breed is rather new, seek veterinary care for any health issue that may arise and to keep up to date on immunizations.
The British Timber shares the same health risks as the breed’s original parents, suggesting that it is also at risk for Addison’s disease. It is unclear if this condition (which comes from the Northern Inuit parent) has been bred out.

The most common health issues include:

Even though the British Timber (and their Northern Inuit parents) make great family pets, they can often become a task for the owner to handle. The animal’s lineage traces them back to the wolfdog family, suggesting that it is in their nature to become aggressive. However, many efforts have been made to breed this aggression out of the breed to improve their overall temperament.

The pack mentality of wolf hybrids (including the British Timber) can lead them to be overly protective of their owners. For that reason, many areas in the United States will not allow them to be imported from overseas to adopt them, as wolf content is banned in some states.

The energetic nature may suggest that the British Timber should be kept away from children, but this is not altogether true. Though they may need training and guidance around children that are smaller than them, they make a great addition to active families.

How to Take Care of British Timber

As a breed, the British Timber is still less than a decade old. To make sure that owners take proper care, here are some considerations that you should take into account before deciding on the adoption of a British Timber dog.

Much like other wolf hybrids, British Timbers thrive best on raw meat. Due to the nutritional content that raw meat provides, it can be purchased fresh or it can be thawed after being frozen. To prevent the dog from eating too quickly, the meat should be cut into chunks that are more suited to their palate.

Even though some breeds thrive on mixing meat with their dry food, this is not the case with the British Timber wolf. While one meal of the day can be made of raw food, dry food should be served in a clean bowl during a separate meal.

Since the Northern Inuit dog can eat up to six cups of dry food in a single day, you may want to track how much they eat when not consuming raw meat.

British Timber owners can add a healthy dose of raw to their dog’s routine while supplementing for joint mobility with glucosamine and chondroitin from chicken cartilage. Also, essential nutrients like calcium, taurine, and antioxidants nourish the heart, bones, eyes, digestion, and immune system.

Click below to get Stella and Chewy’s Freeze-Dried Raw Toppers on amazon. 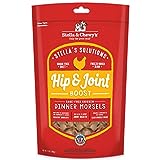 British Timber dogs need regular grooming and maintenance since they have thick fur. Their undercoat and fur need to be brushed at least twice a week. They can have a full shed a few times a year so that could be a problem for the owners.

These animals are super intelligent and are often easy to train since they can very easily pick up commands and start following them. However, they can often get impatient and bored when they are not challenged or do not have a job to do.

Regular exercise and playtime will make the British Timber much more open to proper training.

Just like the Northern Inuit and the Utonagan before it, these pets need significant exercise. They have higher energy needs than other large dogs, even the German Shepherd. Since the parent breed doesn’t require much sleep, the same may be true of the British Timber.

Make sure to give this breed constant outlets for exercise, including walks.

Even though the British Timber puppies are to be cared for in a very similar manner to the adult ones, the puppies usually have to be fed smaller amounts of food. You can feed the little pups with soft bones that they can easily break down. It is better to start training puppies from a very young age so that they can quickly start picking up commands as they enter adulthood.

Since the first litter of these puppies was only born in the last decade, additional research may still be necessary to ensure that these wolf lookalike puppies are cared for properly.

Even though they are affectionate and loyal towards the owner’s family, the British Timbers still have a chance of becoming aggressive. However, timber dogs have generally been monitored as they are genetically bred to have a more even temperament, pushing them away from the constant aggression that wolf dogs are known for. They are bred to be a pet, though it is best to keep them away from infants while training them.

Never leaf any wolf hybrid unsupervised with young children that have not learned proper behavior with pets yet.

If a British Timber puppy is difficult to find, never fear! Here are a few other options that are rather similar to this breed and the Northern Inuit influence it has.

Even though the breed itself is fairly new, they have most recently been featured with other wolf-dogs in the HBO series Game of Thrones as the companions of the Stark family. Most other films and television shows have used closely related breeds instead, as they have a long history of training.

Here are some popular names for the British Timber dogs:

What is a timber dog?

Timber dogs are one of the wolf hybrid breeds. They are covered in fur and are affectionate and loving towards the family they live with.

How big do British Timber dogs get?

They have a usual lifespan of 10 to 14 years, based on the breeding of the Northern Inuit dogs in their family.

They can sometimes be aggressive. However, efforts are being made to breed out this aspect of their temperament.

Yes, they are great additions to the family, as they are affectionate and loving towards their owners.

How much do British Timber dogs cost to own?

Is a British Timber dog good with kids?

While these pets are great with the families they live with, they should often be kept away from children, especially infants as their high energy levels and frequent aggression could prove to be harmful to the kids.

British Timbers are Carnivores, meaning they eat other animals.

What Kingdom do British Timbers belong to?

What is the scientific name for the British Timber?

The scientific name for the British Timber is Canis lupus.