Click through all of our Brown Hyena images in the gallery. 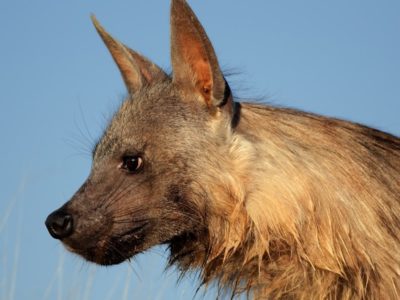 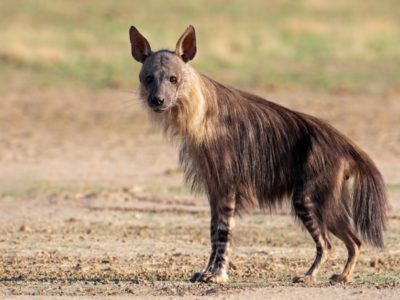 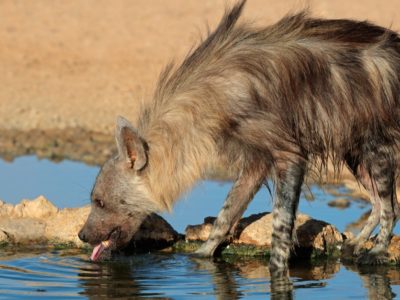 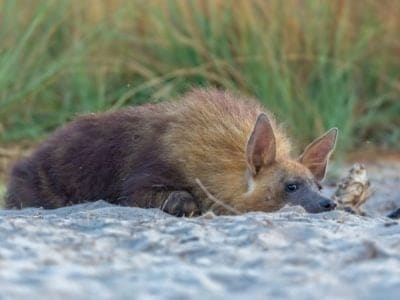 View all of the Brown Hyena images!

Residents of southern Africa, brown hyenas are the rarest species of hyenas. With their scraggly hair and spindly legs, they regularly rank among Africa’s five ugliest animals, and the largest population sticks to the Kalahari Desert.

Hyena behavior is fascinating. Dr. Kay Holekamp, who’s studied the animals and their habitats, once likened her work to “following a soap opera.” However, the scientific community is still light on brown hyena facts because they have yet to be studied extensively in their natural habitats. Most work to date has centered on spotted hyenas.

Today, brown hyenas can only be found in southern parts of Africa, but the fossil record reveals that they roamed throughout Europe in prehistoric times.

Hyaena brunnea is the scientific name for these hyenas. The word hyaena comes from the ancient Greek word “hyaina,” which evolved from “hys,” meaning pig or hog. When the Romans conquered southern Europe and northern Africa, hyaina became hyaena, and when Middle English emerged as the primary regional language, hyaena further morphed into hyena.

These hyenas are also called strandwolwe, the Afrikaans word for “beach dogs.”

A group of hyenas is called a “cackle.”

Brown hyenas are four-legged animals with straight, coarse fur and large pointed ears, and short tails. Individuals of the species have downward sloping spines, stubby hind legs, and longer front legs. Their claws, which are used for defense and digging, are non-retractable, and their tongues are rough.

Animals of the species have long, scraggly hair. Adults also have cream-colored ruffs around their necks. The leg pelage, however, is shorter and features brown and white stripes.

And beware of their powerful jaws, which is their best defense weapon! To give you an idea, newborn hyenas can crack the femurs of springboks! But like cars, strandwolf jaws depreciate over time, and older animals typically suffer from dental wear and tear.

How Big Are Brown Hyenas?

Strandwolves are the second biggest extant hyena species. Male and female hyenas are about the same size. Height-wise, they average between 28 and 31 inches. Length-wise, they run about 51 to 63 inches. Females weigh between 83 and 89 pounds, and males tip the scales at 89 to 96 pounds.

To date, scientists haven’t spent loads of time studying these hyenas. As a result, very little is known about the details of their defense and social structures.

However, researchers know that these hyenas live in clans that mimic wolves’ social groupings. Usually, groups are composed of smaller nuclear families, and everyone works to defend their territory. In some clans, an alpha male and female rule the roost, and occasionally there is a fight for the top male spot. On the female side, the oldest lady serves as the matriarch. Other clans, however, exhibit more equality.

When male brown hyenas come of age, they often leave their original clan to find mates.

Brown hyenas are primarily nocturnal and spend about 80 percent of their active time at night.

Brown hyenas and spotted hyenas are both mammals in the taxonomic family Hyaenidae. However, there are several physical and behavioral differences between the two species.

Appearance-wise, brown and spotted hyenas have similar anatomies, but their coats are different. The former has long shaggy brown fur, and the latter sports a shorter spotted pelage. Both species are about the same size. However, spotted hyenas weigh more.

In addition to physical differences, spotted and brown hyenas also behave differently. For starters, spotted hyenas travel in larger groups led by a female alpha. Brown hyenas stick to smaller clans, and the alpha male is typically first in the hierarchical pecking order.

These hyenas can be found in the southern African countries of Botswana, Namibia, Zimbabwe, Mozambique, and South Africa. Primarily, they stick to the desert, semi-arid areas, woodland savannas, and rocky mountainous regions. However, due to habitat destruction, these hyenas can be found scavenging closer to urban centers these days.

The typical home territory of a brown hyena clan is between 90 to 180 square miles.

These hyenas are primarily scavengers. Occasionally they hunt, but they’re not great at catching prey. They maintain an omnivore diet but prefer meat carcasses. However, when meat is nowhere to be found, they will settle for insects, eggs, fruits, and fungi.

Like all hyena species, these hyenas do not waste food and eat every scrap of nutrients on a carcass, including bone marrow and hooves. Some hyenas have even been known to eat inanimate objects, like tires and tent materials.

Due to their sensational olfactory systems, they can smell carcasses miles away.

Lions and spotted hyenas have been known to kill these hyenas, but the species’ biggest threat is humans. Specifically, farmers who mistakenly believe that they’re a threat to livestock kill the most number of these hyenas annually. Additionally, habitat loss and population fragmentation are other threats to the species.

These hyenas don’t have a mating season, but most individuals mate between May and August. They reach maturity quickly, and females typically have their first cubs at age two. However, they rarely mate with males in their clan and instead choose nomadic partners looking for partners.

The animal’s gestation period is approximately three months, and they typically give birth in deeply hidden dens. Sand dunes far away from spotted hyenas and lions are their favorite. Females usually have offspring every 20 months.

A baby hyena is called a cub. And even though males in the clan usually aren’t the biological fathers, they help raise the group’s young. If two litters are born in the same group simultaneously, the mothers help nurse all the cubs but favor their own. Moreover, all adult members of a clan will drag food to the newborns.

Litters produce between one and five babies, and a cub typically weighs about two pounds at birth. Unlike other Hyaenidae species, these hyena cubs are born with their eyes closed.

Mothers wean their children within a year, and adolescents typically leave their dens at around 18 months.

These hyenas reach full maturity at 30 months, and the average lifespan is 12 to 15 years. Generally, they live shorter lives than other hyena species. Animals in captivity have enjoyed a 40-year lifespan.

Scientists estimate the worldwide population of these hyenas between 4,000 and 10,000. The International Union for the Conservation of Nature — the world’s foremost expert on endangered species — currently lists brown hyenas as Near Threatened.

View all 121 animals that start with B

Brown hyenas are omnivores, but they prefer to stick to meat.

What Do Brown Hyenas Eat?

The brown hyena diet is varied. The animals have robust digestive systems and can consume just about anything, including rubber and tent material! But since they’re not great hunters, they don’t prey on many species and instead scavenge for already dead carcasses.

Which Is Bigger — A Brown Hyena or a Spotted Hyena?

The danger brown hyenas pose is somewhat subjective. They’re not the best hunters — nor are they the most aggressive hyena species. But that doesn’t mean they’re not dangerous. They can attack — and will, especially if they’re starving. However, they tend to stay away from humans.

Why Is the Brown Hyena Endangered?

According to the IUCN, brown hyenas fall into the Near Threatened category on the conservation group’s endangered species list. They made the list since their population numbers are dwindling and their habitats are being threatened.

Where Does the Brown Hyena Live?

One of the little-known facts about brown hyenas is that they don’t laugh. In fact, they seldom make a sound. Occasionally, you may catch them grunting or snorting.

What Sound Do Brown Hyenas Make?

What Speed Do Brown Hyenas Run?

Though researchers have yet to examine hyena speed formally, it is believed that they can run up to 50 miles per hour!

The striped rocket frog is one of the unique amphibious treasures of Australia.