Dr. Meet Poddar/Shutterstock.com
Share this post on:
More Great Content:
Are Hyenas Dogs (Canines) or Cats (Felines)…
Do Hyenas Make Good Pets? Only Until…
What Do Hyenas Eat? A Guide to…
Hyena Birth: What Makes It So Unique?
Hyena Teeth: Everything You Need to Know
10 Incredible Hyena Facts

Hyenas have some of the strongest bites in the animal kingdom, which is much stronger than that of your average animal. It is comparable with animals like bears, sharks, and is even said to be stronger than a lions. What is the bite force of a hyena?

Let’s learn about the bite force of a hyena, one of the most interesting animals in the world. The spotted hyena is the largest hyena species. The other three hyena species are the striped hyena, aardwolf, and the brown hyena, all members of the Hyaenidae family. When looking at a hyena they may look like a dog but are much more closely related to a cat.

Animals like polar bears, and great whites have an amazing bite force but sometimes weigh close to 1,000 pounds. Hyenas are much smaller but, can still bite hard for their size. Spotted hyenas have the strongest bite force when compared to other hyenas, and are also one of the most powerful bites in the world.

How Strong Is A Hyenas Bite Force

The spotted hyena has a bite force of 1,100 psi, which is stronger than most animals and all other hyena species. The 1,100 psi of bite force is extremely impressive because of the hyena’s size. While the spotted hyena is the largest type, it is only around 3 to 4 feet long and weighs between 89 to 140 lbs. Polar bears are extremely large, growing up to 7 feet, and can weigh over 1,000 pounds.  They have a bite force of around 1,200 psi.

The brown hyena is the second-largest hyena species, reaching 2.3 to 2.6 ft, and weighs between 83 to 96 pounds. Striped hyenas are around the same size as the brown species. The aardwolf is the smallest of hyenas, only reaching around 21 to 31 inches. They are smaller than most dogs, and only weigh up to 17 pounds.

The striped hyena also has a powerful bite of 800 psi, but the aardwolf has the weakest bite force of all hyenas because of its size and what it eats. Lions are one of the animals the hyenas have to compete with, and surprisingly hyenas have the stronger bite force. Even though a lion is massive, on average they have a bite force between 650 to 1,000 psi. Hyenas have one of the strongest bite forces in their range, and they use their strong bites to feed on a variety of things.

Hyenas are carnivorous mammals and eat various animal carcasses that they come across. The aardwolf is the only member of the Hyena family that is an insectivore, feeding mostly on termites and larvae. Brown and striped hyenas are mainly carnivores, eating dead animals killed by other larger predators. These two hyenas will also hunt small animals like rodents and insects. They will eat anything they come across since they are scavengers.

The spotted hyena is a hunter and survives on animals it preys on. This species eats the most meat out of all hyenas and can have around 30 pounds of meat in one meal. The large size, strong bite force, speed, and size in numbers make them one of the deadliest predators. Spotted hyenas live in groups called clans, and work together to take down large prey. Hyenas struggle hunting alone, as they only have a 15% success rate, while when they are in a group it rises up to a 74% hunting success rate.

Some things a spotted hyena eats:

A hyena’s teeth and bite force is helpful in eating to get flesh and bones. A hyena is capable of crushing bones with its teeth and will eat them. They have around 32 to 34 teeth and are able to bite through any prey that lives in their habitat.

Where Are Hyenas Found?

Hyenas can be found in Africa, the Middle East, and Asia. They live in woodlands, grasslands, savannas, forests, sub deserts, and other types of habitats. Each hyena has its own preferred habitat to better suit its lifestyle. Striped hyenas are more likely to live in mountain and woodland habitats. The brown hyena lives and scavengers in deserts. Aardwolves rely on termites to be present in their habitat to survive.

How Hyenas Interact With Other Animals?

Hyenas live in Africa alongside other dangerous predators like lions, cheetahs, and hippos. Spotted hyenas can travel in large groups of up to 80 members. Lions are much better equipped for a fight even if a hyena has a better bite force, and they can usually overpower a group of hyenas.

Spotted hyenas hunt but the striped and brown hyenas rely on other predators to kill food for them so they can scavenge what is left. They are often attacked by other predators that are defending their food like lions, leopards, and crocodiles.

Humans are still one of the most dangerous predators for a hyena and are the reason they have experienced a decline in population. Hyenas are not going extinct, but are vulnerable due to the large loss of their habitat. They are also killed by farmers and locals who are trying to defend their livestock. The bite force of a hyena is powerful as it can chew through bone, but there are also other amazing things to learn about them as well! 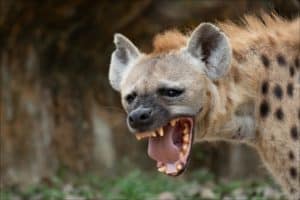 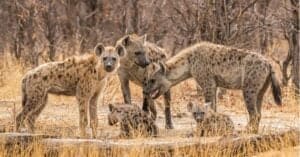