Both females and males have horns. 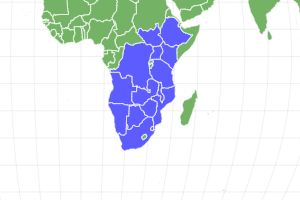 View all of our Eland pictures in the gallery.

View all of the Eland images!

The spiral-horned eland is one of the biggest antelope species of Africa, displaying tawny colors with black markings throughout their body.

Identification of this species over other antelope species can be difficult, but their spiral horns are a dead giveaway. Between the genders, females boast the biggest horns at up to 27 inches long. This horned beast is not aggressive, living amongst over 500 others in their large, migratory herds.

The scientific name of the eland is Taurotragus oryx. It belongs to the Bovidae family of the Mammalia class. Eland is broken down into two main subspecies – the common eland and the giant eland.

This name is comprised of three main words – tauros, tragos, and oryx. The meanings are mixed in Latin and Greek language. Tauros is the word for a bull, while tragos means goat. Oryx stems from late Middle English and Greek’s “orux,” which is a stonemason’s pickax. It is likely that “oryx” is a reference to the eland’s horns.

The tawny body of the eland helps it camouflage against arid savannas, while the 12 white stripes give more realistic colors to the area. They have multiple dark markings along their body. They have some of the biggest horns of any antelope, beaten only by the kudu. This spiral-horned antelope species features horns on both the females and males and they are one of the biggest antelopes in the world, standing at nearly 9.5 feet tall (among larger males).

Females tend to weigh a little less than males, ranging from 660 lbs. to 1,300 lbs. Males, on the other hand, weigh approximately 880 to over 2,100 lbs. Though they are able to trot away from predators, they don’t have any physical characteristics beyond camouflage to help them.

Though the eland and kudu are both dominant antelope species in Africa, you’ll find that proper identification reveals they are not the same animal. The kudu is much taller and heavier, but they are much lankier. One of the telltale signs of the kudu instead of the eland is the presence of a beard on males, though the colors between the species are quite similar.

Elands live in a group with other eland called a herd, which can include up to 500 animals. Despite their large numbers, they aren’t territorial or aggressive, even among males during the breeding season. They tend to roam from place to place, rather than securing a single spot as their own. When they need to rest, they find sheltered areas in their large home range in Africa.

The best habitat for eland is one with plenty of food, and they’ll travel a great distance to find it. They seem to adapt well to many areas, including woodlands, grasslands, and savannas. They graze on the land within a herd, though they will separate by males and females.

The two subspecies of eland thrive in different areas of Africa exclusively. The common eland prefers the climate in eastern and southern regions, while the giant eland thrives in central and western areas. They migrate seasonally to seek out food, and they can go long spans of time without water because they retain hydration so well.

The diet of an eland is primarily made up of high-protein plants. The preferred food of this antelope species is the leaves of flowering plants, but they aren’t picky. They typically go for whatever happens to be available, allowing them to indulge in the leaves from shrubs, trees, grasses, and seeds. To maintain hydration, this device will also increase its natural temperature, allowing them to use low-quality plants as part of their diet.

Elands are herbivores, so they don’t go after prey of any kind. However, their substantial meat makes them an essential part of the food chain with multiple predators.

What Do Eland Eat?

Eland doesn’t eat meat, so they don’t have any prey to speak of. Instead, they prefer high-protein leaves and plants that they can graze on comfortably.

When elands mate, the male will pursue females in green plains, chasing them to determine if they are ovulating and to test out their urine. Once paired with a mate, the female is pregnant for approximately 274 days, which is just over nine months. They give birth to up to 2 live calves, and females often take multiple partners in their lifetime.

The babies of elands are called calves, and they nurse from their mother for up to six months. The fat in the milk is high, which helps to improve the growth of calves quickly. The mother isn’t on her own to raise her young – she has the help of her entire herd that works as a family.

The average lifespan of the eland is 15-20 years, though elands in captivity are known to live up to 25 years in good conditions.

Currently, there are 136,000 of these animals in the world, and they are primarily found in Africa. The population is steady, and the IUCN has assigned a conservation status of “least concern.”

What is an eland?

The eland is the largest antelope species in the world, shaped much like a cow. It has the ability to jump over a 4-foot-tall fence, and it has incredible endurance while trotting along. Males and females both have horns.

Is an eland bigger than a moose?

Yes! In fact, the eland also has greater speed and strength than the moose. However, the moose stands taller and has a much bigger problem with aggression.

How many species of eland are there?

This antelope species are broken down into two subspecies – the Giant Eland and the Common Eland. While the Giant Eland is found in western and central Africa, the common eland is primarily located from Kenya to Botswana in the eastern and southern regions.

No. The IUCN considers them to be of least concern.

How heavy is an eland?

Both species of eland are typically 660 – 2,650 lbs. Females are smaller than males by over 100 lbs. at their lowest weight.

Is eland good to eat?

Yes. Russian and South African cuisine includes both the milk and meat of this species as a major source of nutrients. It is often treated the same as other cattle.

Are eland carnivores, herbivores, or omnivores?

What are the differences between the Kudu and the Eland?