A-Z-Animals.com
Share this post on:
More Great Content:
The 10 Largest Antelopes In The World
Antelope Vs Deer: What Are the Differences?
Gazelle vs Impala: Key Differences Explained
What Do Antelopes Eat?
Kudu vs Nyala: What Are Their Differences?
Impala vs Antelope: What are the Main…

Antelopes are usually known for their grace and dexterity, but some are also surprisingly large. Two of the biggest in the world are the kudu and the eland. These African mammals share several characteristics but also deviate in important ways. Compare the kudu vs eland to discover all about these two antelopes.

Comparing a Kudu vs Eland

The Key Differences Between a Kudu and an Eland

The key differences between kudus and elands are habitat, size, appearance, reproduction, and behavior.

Elands are among the largest antelopes in the world. Common elands are smaller than their giant cousins, with females standing 47-59 inches at the shoulder and weighing 660-1320 pounds. Males stand up to 63 inches and weigh between 880-2070 pounds. Giant elands reach anywhere from 50-70 inches at the shoulder. Females weigh approximately the same as common female elands, though giant eland males can reach a whopping 2200 pounds.

Aside from the size difference, lesser and greater kudus appear similarly. Males of both species have spiral horns, growing much larger in the greater kudu, up to 4.5 feet long. White facial marks may appear in stripes, cheek patches, and chevrons. Males’ coats are generally greyish-brown, while females tend to be reddish-brown. Some individuals’ coats may be bluish-grey. Kudus of both species have white stripes on their bodies: 11-15 for lesser kudus and 6-10 for greater kudus.

Elands may appear similar to kudus with their tawny coats and up to 12 white body stripes. Dark markings may be present on the body or the head and ears. Both males and females have tight spiral horns, though males’ are larger, extending over 4 feet in length. Both species of elands have large dewlaps.

Lesser kudus reach sexual maturity by 18 months, breeding and calving at any time of year. Greater kudu females reach sexual maturity by 15-21 months, though males don’t mature until 21-24 months. This species only breeds near the end of the rainy season, from February to June. Females of both species leave their herd to give birth after a 7-9 month gestation period. By 3-4 months, the calf is ready to accompany its mother back to the herd. By the age of 6 months, it should be ready for independence.

Female elands typically reach sexual maturity between 12-36 months while males mature by 4-5 years. Elands have a gestation period of about 9 months and wean their calves after about 6 months. Like kudus, elands only give birth to 1 calf at a time.

Kudus are generally docile and unaggressive animals except at mating time. Even then, males prefer to settle disputes via a lateral display (standing sideways to display one’s size). If necessary, males lock horns and push one another until one gives in. Bull kudus are typically solitary, while cows are gregarious, living in herds of up to 24 individuals.

Similarly, elands are unaggressive in most instances, even males. Due to their nomadic nature, elands rarely claim or defend territories as their own on a long-term basis. Males either live a solitary existence or join small bachelor groups of adult males. Females live in herds with other females, often separate from a nursery group comprising juvenile elands. These calves may become more bonded to one another than to their mothers. At breeding time, all groups come together. Herds may number up to 500 individuals.

Kudu vs Eland: Diet and Predators

Both kudus and elands are herbivorous, eating leaves, twigs, shrubs, flowers, herbs, grasses, seeds, fruits, and roots. Elands will eat the leaves of flowering plants whenever possible. Due to their size, both antelopes make ready prey for larger predators, including lions, leopards, hyenas, African wild dogs, and humans. 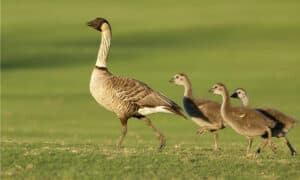