Click through all of our Iguana images in the gallery. 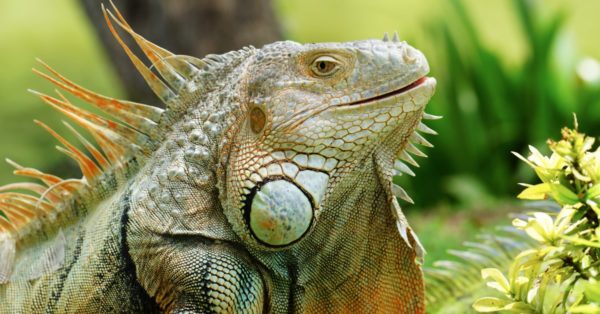 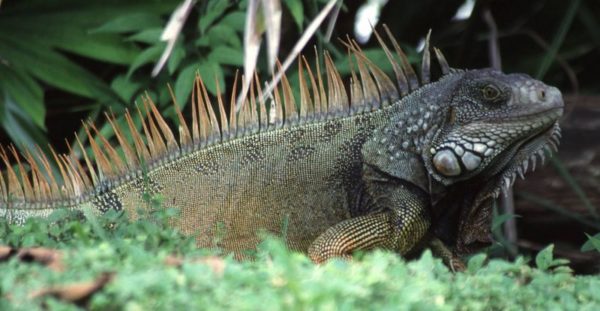 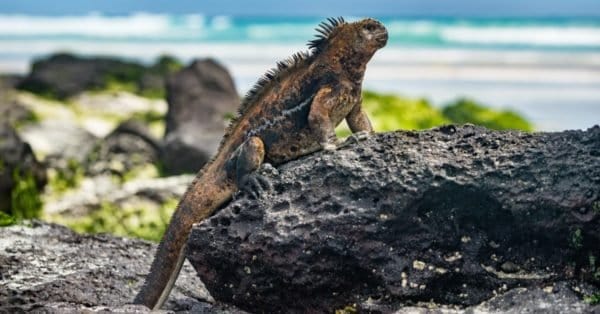 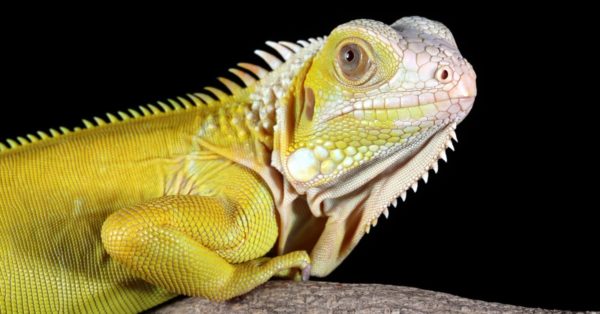 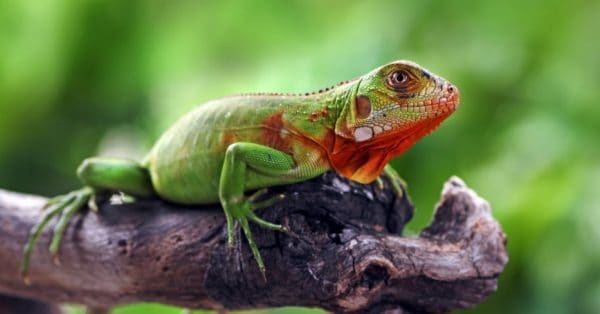 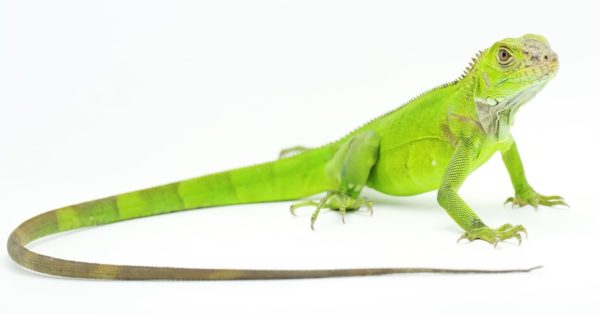 View all of the Iguana images!

Native to the jungles of Central and South America and many islands in the Caribbean, Iguanas are large lizards that are also popular with Americans who want to keep them as pets.

The name iguana comes from the original Taino name for these lizards, iwana. Green iguanas are the most widely known species as they are often kept as pets. Most pet iguanas have a low price. They are also considered nuisances in Puerto Rico and some parts of the United States, particularly Florida, where they have become an invasive species.

The scientific name of this animal is Iguana iguana. It most commonly refers to the green iguana that is distributed through much of the southern United States. All iguana are reptiles who are members of the order Squamata and the suborder Iguania and the family Iguanidae. The rhino iguana, found primarily on the Caribbean island of Hispaniola, has the scientific name Cyclura cornuta. The blue iguana has the scientific name Cyclura lewisi. Other genera include the desert iguana, Dipsosaurus dorsalis, and the marine, Amblyrynchus, and terrestrial, Conolophus, iguanas of the Galapagos Islands.

The different species have various sizes ranging from five to seven feet in length. Their whiplike tails make up about half of their body length. The desert iguana is one of the smallest species at only 24 inches long. The blue iguana is the heaviest lizard, weighing up to 30 pounds.

These animals have varying scales that cover different parts of their bodies. Some have large round scales that are scattered around their necks among smaller, overlapping scales. Scales on the dorsal trunk are usually thicker and more tightly packed and can be a variety of colors. These reptiles can be difficult to see as their coloration often allows them to blend in with the terrain, which helps them evade predators.

These animals vary in color, with some species sporting blue or grey skin. The American green iguana tends to become a more uniform green as they age. Younger lizards have scales that vary between green and brown. The colors of individual iguanas can also vary based upon the animal’s mood, temperature, social status, or health. Their skin tends to be darker in the morning when their body temperature is lower and pales as the day heats. Dominant males also tend to have darker coloration. Before courtship, some males become bright orange or golden.

Distinguishing features also include a dewlap under the throat, which is particularly developed in males. They also have a dorsal crest on their backs that starts at the neck and ends at the tail.

These animals have keen vision, which allows them to see shapes, shadows, colors, and movement at long distances. Their visual acuity allows them to navigate the terrain to locate food and communicate with other members of their species.

In the wild, they will seldom fight except when there aren’t enough good places to sun themselves. Basking sites are important as warming themselves by sitting in direct sunlight is essential for body temperature and digestion. Biting injuries in the wild are rare but in captivity, injuries are more common.

These animals sometimes travel considerable distances. Females often return annually to the same nesting sites and then travel back to their home territory after laying their eggs. Hatchlings also disperse over a wide area.

Green iguanas are arboreal, living at the top ends of forest trees. Juveniles reside lower while mature iguanas live higher up. Living high in the tree canopy allows them to sun themselves easily. They rarely descend to the forest floor except to lay eggs. Although they prefer forests, green iguanas can also adapt well to open areas. When near water, they will dive beneath the surface to evade predators.

When frightened, they usually freeze, thereby blending into their surroundings or hide. These animals can drop off part of their tail, giving them a chance to escape. A new tail will sprout and regrow within a year, although it won’t reach its original size.

Although they are omnivores, most iguanas in the wild tend to eat a primarily herbivore diet. Their favorite foods are the leaves, buds, flowers, and fruits of fig trees. For the first two weeks following hatching, the young reptile eats the yolk from their eggs. As young iguanas need a high amount of protein for adequate growth, they tend to eat more insects than adults. They may occasionally eat invertebrates or small amounts of carrion, although they prefer green leafy plants or ripe fruits.

These animals use their tongues to move their food so they can bite it into pieces small enough to swallow with little or no chewing. Older iguanas eat high calcium, low phosphorus diet. Low environmental temperatures inhibit iguanas’ appetites. Usually, eating occurs when temperatures are between 77 and 95 degrees Fahrenheit. Basking is important to digestion. These lizards may stop eating prior to shedding their skin and when they are about to lay their eggs.

Large birds such as hawks and owls prey on juveniles. Dogs and feral cats also prey upon iguanas. Humans also consume these animals and their eggs and use these lizards as bait for crocodiles. The conservation status of most species of least concern as they are widespread. Habitat destruction is another threat, particularly for the blue iguana that is native to the Cayman Islands. This species is listed as endangered because of its shrinking habitat. The rhino iguana is listed as endangered. Rhino iguanas only have a stable population on the island of Isla Beata.

These animals exhibit a promiscuous mating style. Courtship occurs during the dry season, with females controlling large territories where they make several nests. Males compete for females by head bobbing, extending and retracting their dewlap, nuzzling and biting the necks of females, and sometimes even changing colors. Females will also display aggressive behavior if good nesting sites are limited.

Once a female selects a male, he marks his territory with a pheromone secreted from his hind limbs. Copulation occurs with the male straddling the female and sometimes biting her shoulder to hold her in place. The female then deposits her eggs among the nests she has created. Females can store sperm from previous mates for several years if they cannot find suitable mates when ready to lay eggs.

Females lay eggs approximately 65 days following mating. The number of eggs produced depends on her nutritional status, maturity and her size. Females will deposit 10 to 30 leathery white or cream-colored eggs to each nest. Nests are sometimes shared among females if nesting sites are limited. Incubation ranges from 90 to 120 days so that the eggs hatch during the wet season.

Hatchlings weigh less than a half-ounce at birth, but within three years can weigh just over two pounds. Mature animals usually weigh between nine and 13 pounds, but some can weigh as much as 17.5 pounds. Green iguanas reach sexual maturity between three and four years of age.

These animals can live for 15 to 20 years and even longer if cared for properly. At the same time, the San Diego Zoo indicates that some of them can live as long as 60 years. However, wild iguanas have an average lifespan of eight years.

You won’t find an overall estimate of the population worldwide because many species have a considerable range and are not in danger of extinction. However, the island of Puerto Rico estimates its iguana population at four million, which means that there are approximately two iguanas for every human on the island. The total population of marine iguanas in the Galapagos Islands is estimated at between 250,000 and 300,000.

Iguanas in the Zoo

The San Diego Zoo and the San Diego Zoo Safari Park are home to American iguanas, including the desert iguana that is native to southern California, along with iguanas from other areas of the world, including some of the endangered blue iguanas. The zoo has a ticket package price that allows visitors to see these animals in exhibits and more natural habitats at the Safari Park. San Diego Zoo also has programs where you can learn facts about its iguana species.

San Diego was the first American zoo to hatch the critically endangered Anegada Island iguana. San Diego Zoo Global works with local governments and conservation organizations to help propagate the more vulnerable species. Keepers use a technique called headstarting, where eggs are incubated in a facility and hatchlings are cared for in large pens. When they are large enough to protect themselves, they are released into the wild. The zoo has also started conservation education programs on several Caribbean islands to give residents and visitors crucial facts about endangered iguanas.

View all 16 animals that start with I

Are Iguanas herbivores, carnivores, or omnivores?

Iguanas are Omnivores, meaning they eat both plants and other animals.

What Kingdom do Iguanas belong to?

Iguanas belong to the Kingdom Animalia.

What class do Iguanas belong to?

Iguanas belong to the class Reptilia.

What phylum to Iguanas belong to?

Iguanas belong to the phylum Chordata.

What family do Iguanas belong to?

Iguanas belong to the family Iguanidae.

What order do Iguanas belong to?

Iguanas belong to the order Squamata.

What type of covering do Iguanas have?

Iguanas are covered in scales.

In what type of habitat do Iguanas live?

What is the main prey for Iguanas?

What are some predators of Iguanas?

Predators of Iguanas include hawks, eagles, and snakes.

How many babies do Iguanas have?

The average number of babies an Iguana has is 3.

What is an interesting fact about Iguanas?

Iguanas use visual signals to communicate!

What is the lifespan of an Iguana?

How fast is an Iguana?

An Iguana can travel at speeds of up to 21 miles per hour.

Where do iguanas live?

These lizards are native to Central America and South America in countries like Brazil, Paraguay, and Mexico. They are also native to the islands of the Caribbean and West Indies. Humans are responsible for bringing them to various American states, including Florida, Texas, and Hawaii, where they have become an invasive species.

What can iguanas eat?

Do iguanas bite you?

Iguanas will rarely bite and only then in self-defense. However, when they do attack humans, the bites are quite painful.

Green iguanas are friendly as pets but not in the same way that cats and dogs are. Some iguanas will try to escape if given a chance.

Can an iguana kill you?

They can’t kill you, but they can hurt you because of their sharp, serrated teeth. If an iguana attacks, it can produce serious injuries to the face, hands, legs, and ankles.

Unlike other reptiles such as snakes, iguanas are clean animals who stay away from their excrement, thereby maintaining a neutral smelling body.

How much do iguanas cost?