Can reach nearly 4ft in length! Click through all of our Giant Clam images in the gallery. 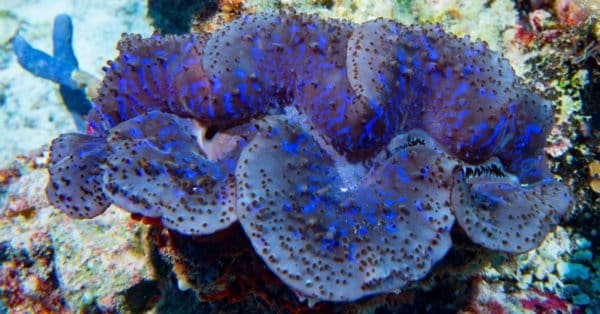 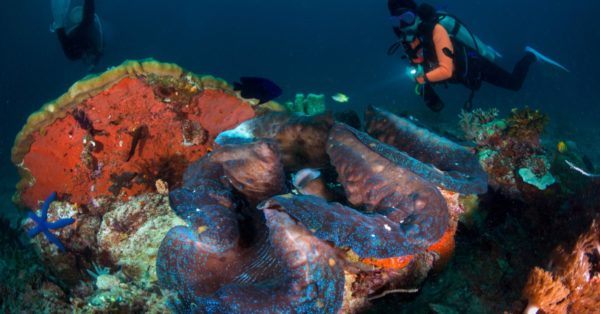 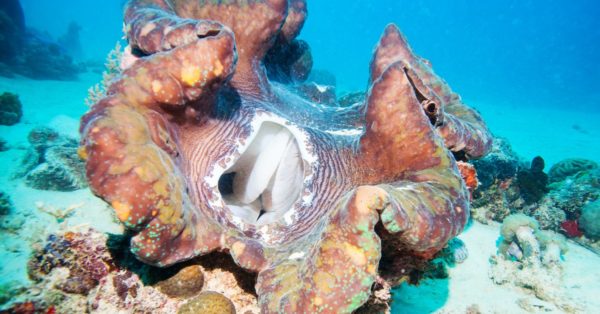 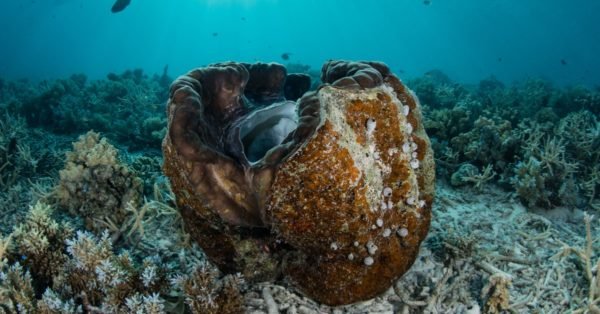 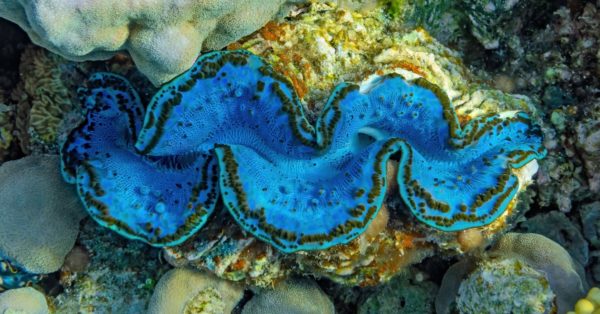 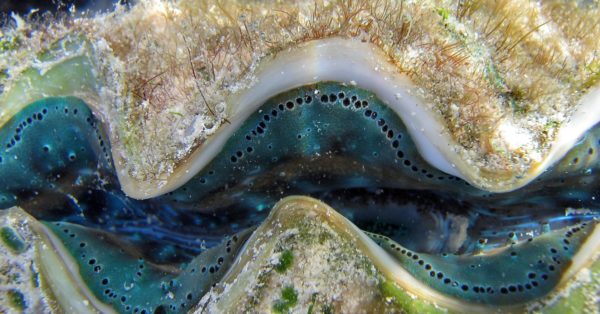 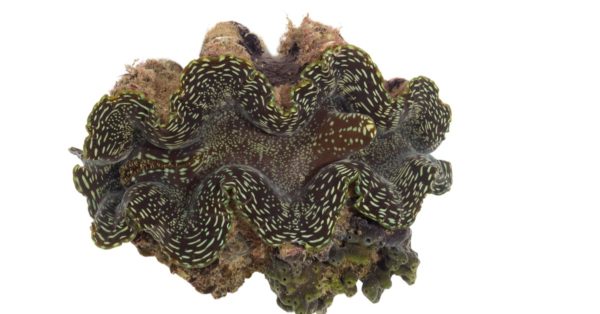 View all of the Giant Clam images!

Giant clams grow to be about 4 feet in length. They live in the Indian and South Pacific Oceans. The exposed mantle, or soft tissue, of a giant clam, features a combination of colors and patterns that can include yellow, green, iridescent blue, and purple. This species of clam is an omnivore eating tiny marine plants as well as animals in the form of zooplankton. The lifespan of this mollusk goes all the way up to 100 years!

The scientific name of this clam is Tridacna gigas. The word Tridacna comes from the Greek word tridaknos meaning oyster and the Latin word gigas means giant.

It belongs to the Cardiidae family and the class Bivalvia. There are 100 species of this clam.

These clams have a thick, heavy shell with fluted edges that protects the mantle, or soft tissue, inside it. Its mantle is colorful displaying patterns of brown, iridescent blue, green, yellow, and purple. The algae stored in this clam’s body is what makes its mantle so colorful. An adult clam’s mantle has pale spots on it known as windows. The size of these clams ranges from 4 feet to 4.5 feet in length. They weigh around 500 pounds. Picture 3 bowling pins lined up end to end and you have the length of a 4-foot giant clam. A 500-pound giant clam is equal in weight to half of a horse. The heaviest giant clam on record is 550 pounds!

The sheer size of an adult giant clam as well as its thick shell serves as excellent protection against most predators. Furthermore, this clam can close its shell most of the way to protect itself from threats. An adult clam isn’t able to snap its shell closed. After the clam attaches itself to a reef, it stays there for its entire life.

These clams live in warm water habitats. Specifically, they are found in the South Pacific and Indian Oceans. They live off the northern coast of Australia as well as near the Nicobar Islands and Fiji. The Great Barrier Reef near Australia is home to many of these clams. They live in reef flats as well as in shallow, sandy areas of lagoons.

They are usually found at a depth of around 65 feet. In an ocean, a depth of 65 feet is not very deep! Living in shallow areas allows these clams access to filtered sunlight.

These clams are omnivores. However, since they are attached to a coral reef, they can’t hunt for food. Luckily, the food comes to them! These mollusks have a siphoning system that takes in tiny prey that floats by. This siphoning system is similar to the filtering system in a backyard swimming pool.

It may seem like the sheer size of this clam would keep all threats away. But this mollusk does have some predators. Reef fish, eels, and starfish eat the meat of the clam. Humans also harvest these clams to eat their meat.

What do giant clams eat?

These clams feed on both plants and animals namely phytoplankton and zooplankton. These clams have a siphoning system that takes in water along with tiny particles of food that pass by.

Also, the clam gets nutrients including sugar and protein from the billions of particles of algae stored in its tissue. This is what is called a mutually beneficial relationship. The algae enjoy the protection of living in the clam’s body tissue while the clam receives essential nutrients in return.

These clams open their shell during the daylight hours to allow sunlight to filter in through the clear spots, or windows, in its mantle. Sunlight plays a part in the photosynthesis that feeds the algae.

Eel, reef fish, and starfish eat the meat of these clams. When one of these predators takes a bite, it doesn’t kill the giant clam. However, it does cause injury.

Humans are another threat to this clam. People harvest these clams for their meat and shells. Specifically, the adductor muscle of a giant clam is considered one of the most delicious parts of this sea creature. These clams are especially popular cuisine in Japan, France, and throughout southeast Asia.

The larvae of these clams are eaten by fish, octopus, and crabs. These larvae are so small that thousands of them could be eaten by one large fish. This is the main reason why a giant clam releases so many eggs. It increases the chances some of them will survive to adulthood.

Water pollution is another threat to these clams. Pollution can affect the rate of reproduction of these sea creatures.

The official conservation status of these clams is Vulnerable.

The fertilized eggs hatch into larvae. Giant clam larvae circulate in the water looking for plankton and other tiny particles of food until they grow large enough to settle into one place near or on a coral reef.

A developing giant clam goes through many stages. It starts out as an egg and hatches into larvae. After that, it develops into a veliger, a pediveliger, a juvenile, and an adult. Though it takes years for a giant clam to achieve adult weight and size it has a lifespan of up to 100 years. So, it has plenty of time to grow into a 4-foot, 500-pound grown-up!

According to the IUCN Red List of Threatened Species, the population of these clams is listed as unspecified. It’s threatened by humans who harvest it for its meat and shell. Water pollution is another threat to this marine creature.

The conservation status of this clam is Vulnerable.

Giant Clams are Omnivores, meaning they eat both plants and other animals.

What Kingdom do Giant Clams belong to?

What class do Giant Clams belong to?

What phylum to Giant Clams belong to?

What family do Giant Clams belong to?

What type of covering do Giant Clams have?

Giant Clams are covered in Shells.

What genus do Giant Clams belong to?

Where do Giant Clams live?

Giant Clams live in the Indian and Pacific Oceans.

In what type of habitat do Giant Clams live?

What do Giant Clams eat?

What are some predators of Giant Clams?

Predators of Giant Clams include eels, snails, and starfish.

What is an interesting fact about Giant Clams?

What is the scientific name for the Giant Clam?

The scientific name for the Giant Clam is Tridacna gigas.

How many species of Giant Clam are there?

There are 100 species of Giant Clam.

What do giant clams eat?

These sea creatures eat phytoplankton and zooplankton. These are tiny plants and animals that a giant clam siphons into its system and consumes. In addition, giant clams get essential nutrients including sugar and protein from algae that live in their body tissue.

How big is a giant clam?

A giant clam has a thick, heavy shell with fluted, or curved edges. The soft tissue, or mantle, inside its shell, displays a pattern and mixture of colors such as yellow, green, iridescent blue, and purple. A giant clam’s mantle can be compared to the fingerprints of a person. No two mantles are exactly alike!

A giant clam’s mantle has clear spots called windows. The sunlight travels through these windows to access the algae living inside the clam’s tissue. The sunlight is necessary for the algae to photosynthesize.

This clam also has two siphons located in its mantle. One siphon takes in water along with phytoplankton and zooplankton. The other siphon releases water.

No. There is a legend that has been around for centuries stating that giant clams are able to grab divers and swallow them! This is why they are sometimes called maneaters. However, this is just a tall tale made popular by movies and fantasy novels.

Do giant clams have pearls?