Click through all of our Lionfish images in the gallery. 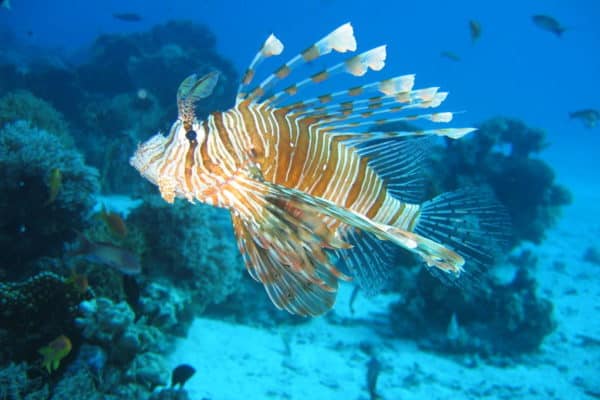 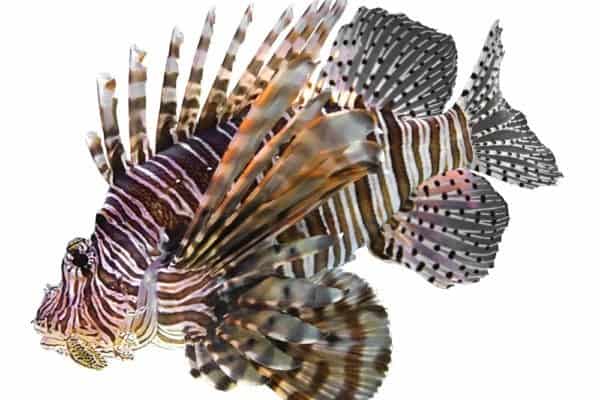 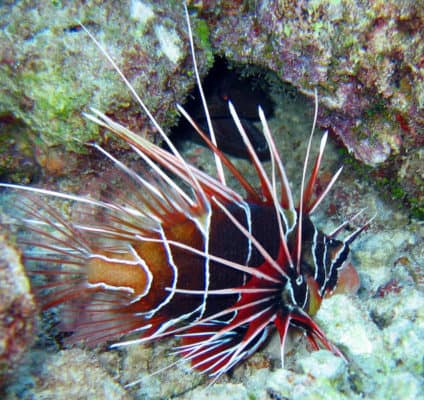 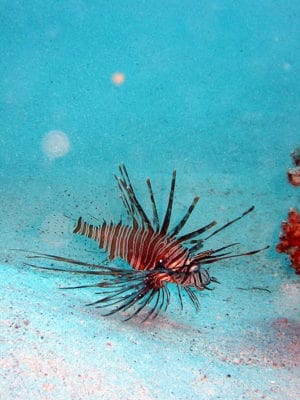 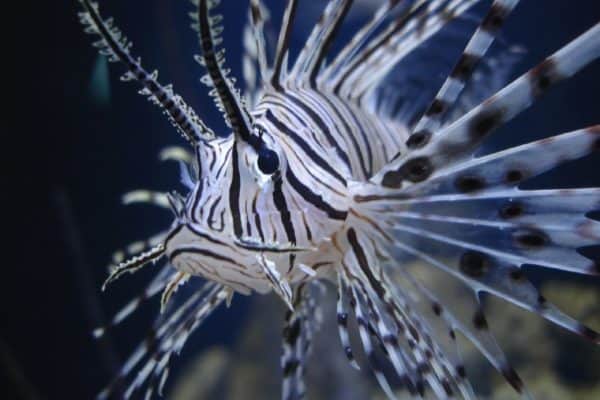 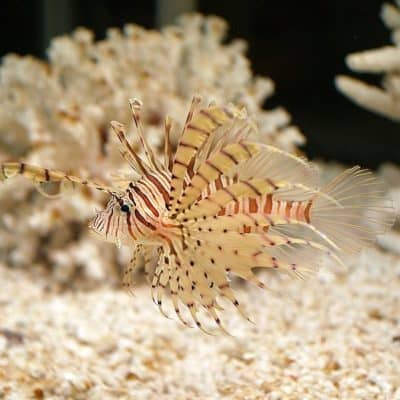 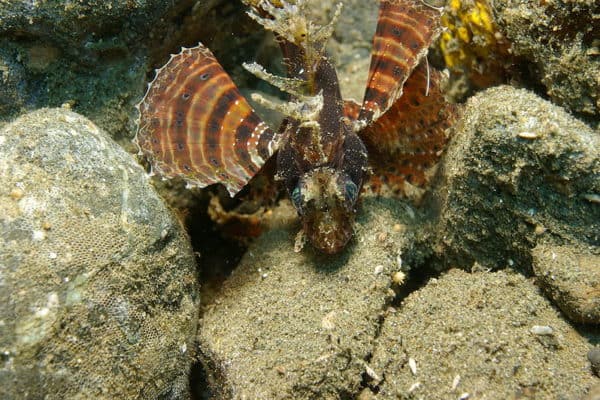 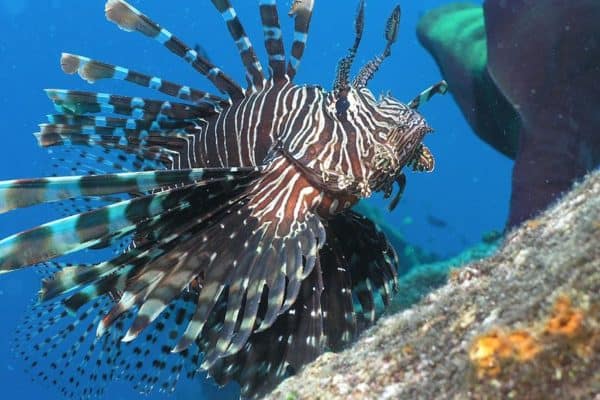 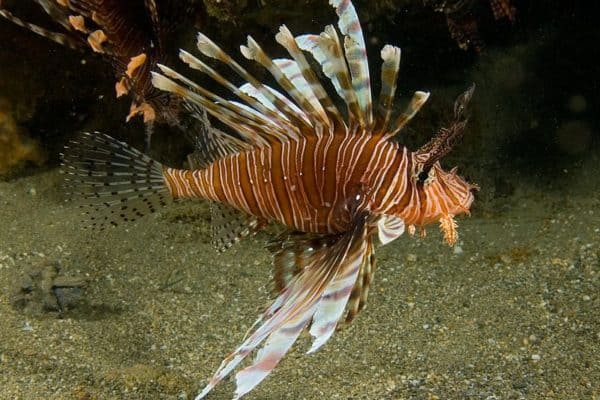 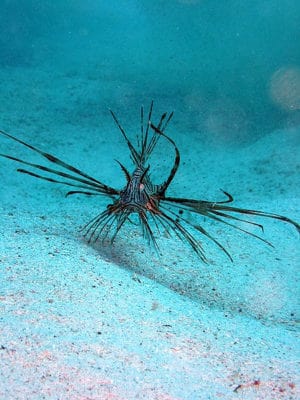 View all of the Lionfish images!

Lionfish are a group of carnivorous fish species that are native to the Indian and Pacific oceans.

While there is plenty of diversity between the different species, all of them are characterized by striking skin color and pronounced venomous spines protruding from their body. The venom conveyed by their sting is a powerful deterrent to predators and is even a health concern for humans. Several types of lionfish have become established off the coast of the United States and elsewhere in the Atlantic Ocean as invasive species that present a significant ecological threat.

Lionfish also go by many other names, including zebrafish and tastyfish. They are divided into a two genera: Pterois and Dendrochirus. The scientific name of Pterois is thought to originate from the Greek word “pteron,” which means feather or wing. The scientific name for Dendrochirus also has Greek origins and can be loosely translated as “having tree-like markings.” Both lionfish genera belong to the taxonomic family Scorpaenidae in the Actinopterygii class.

Other Names for Lionfish

The 12 species in the genus Pterois are the ones that are conventionally labeled as lionfish, while the 6 species in Dendrochirus are considered dwarf lionfish. Lionfish have many colloquial or common names, including: firefish, turkeyfish, butterfly-cod, zebrafish and tastyfish. Many of these names are typically used to describe a specific species. For example, the species P. miles is known as devil firefish, P. volitans is the red lionfish and D. biocellatus is called twospot turkeyfish.

With about 18 species across two genera, there is plenty of diversity in coloration and size among lionfish. However, all of them trace their origins to the Indo-Pacific region and are considered invasive elsewhere. Both the classic and dwarf varieties typically pursue a diversity of prey in relatively shallow coastal waters.

With interesting combinations of brilliant colors and interesting patterns, lionfish certainly have a unique aesthetic. Their coloration combined with numerous spines gives them a striking visual display and is the main reason they are sought after as an aquarium species. In their natural environment, these colors serve to warn potential predators that the fish has hazardous venom and is not a desirable target.

All lionfish are equipped with a collection of spines along the top of their body and most have spines protruding from their sides or rear as well. Many species also have an angling antennae that extends from their forehead that serves to lure prey closer before being eaten. In general, lionfish have a compact form with a thick body and shorter tail. Adult fish can range in length up to 18 inches, while some dwarf varieties only reach about 6 inches long.

All lionfish species are native to saltwater environments and prefer to inhabit shallower waters less than 500 feet in depth. Some species linger around rocky coastlines or seek harbor in lagoons. Others seek sheltered habits like coral reefs and submerged wrecks that provide a rich hunting ground to satisfy their voracious appetite.

These fish have a vast natural geographic range, although individual species are typically confined to regional waters. The warm, tropical waters between Australia and China are rich in diversity and population. However, various lionfish species find their origin across most of the Indo-Pacific coast stretching from Japan to Madagascar.

Lionfish are a significant invasive threat to the Mediterranean, Caribbean and throughout the Atlantic Ocean. Divers and ecologists began reporting occasional sightings off the coast of the United States in the 1990s. Within a few decades, population numbers exploded due to their fast reproductive rates and effective defense mechanisms. Total population numbers are unknown, but are generally considered to be of least concern in terms of conservation.

Total population numbers for lionfish are unknown, but their resistance to predators and incredible reproduction rate means they are at low risk of endangerment. In fact, their ability to rapidly increase their numbers in new environments is a cause for concern for many endangered species around the entire Atlantic ocean.

Lionfish are voracious eaters and prey on all kinds of marine creatures. They are typically ambush predators that take an active role in surprising and cornering prey. Some species also propel water currents towards prey to disorient them and prevent escape. They also have few natural predators due to their poisonous spines, although there are a few carnivorous species that can eat them.

Humans are actually one of the few species that successfully hunts and eats lionfish, although it’s not without its risks. Natural marine predators include moray eels, bluespotted cornetfish and several types of groupers. Other types of ocean predators, like sharks and Bobbit worms, may also be able to eat lionfish.

What do lionfish eat?

These carnivores aren’t all that picky about what they eat. They are capable of decimating local populations of small fish species as well as various invertebrates and mollusks. Creole fish, yellowtail snappers and shrimp are among the many possible items on their menu.

Lionfish have astounding reproductive capabilities, which only contributes to their ecological threat as an invasive species. Even though they can live for up to 20 years, they typically reach sexual maturity in less than one year. They are able to reproduce every few days and continue to lay eggs throughout the entire year. Some females have been reported to release more than 2 million eggs in a single year.

Lionfish in Fishing and Cooking

While lionfish don’t have a strong history as a menu item for humans, this has been changing in recent years. Since there are few natural predators for the fish, conservationists and other organizations throughout the Americas have been advocating consumption of the fish as a means of population control. While fishermen do have to careful about the sting of their spines, the venom does not impact the safety or taste of the meat when properly prepared.

The fish’s meat is actually considered to be quite good and suitable for regular consumption. It’s flavor can be described as delicate and mild with a moist and tender texture. Its taste has also been compared to that of lobster and shrimp. Preparation often involves breading the meat to keep it from falling apart, although there are plenty of viable cooking methods. However, preparation should always involve careful removal of spines and applying enough heat to neutralize any toxins.

Lionfish spines convey venom to animals that touch them, creating an effective defense against the vast majority of predatory ocean animals. Their venom is a leading reason for their success as an invasive species since new ecosystems have few natural predators that are adapted to get around this mechanism. Their toxin can cause numerous health issues in humans, ranging from localized pain to digestive symptoms, and may cause a lethal reaction in small children or individuals with a sensitivity to the chemical.

Where are lionfish found?

Lionfish are found throughout coastal regions in the Indian and Pacific Oceans. Individual species are mostly localized to certain regions. Several species have also become prolific and successful invaders in the Caribbean and along the coast of North America.

Lionfish live exclusively in shallower waters with a depth of less than 500 feet. They tend to stay around rugged terrain, like coral reefs or lagoons, that helps them ambush and corner their prey.

Where did lionfish come from?

Lionfish come from the Indo-Pacific region, particularly the waters around Australia, Malaysia and other Pacific islands.

What happens if you get stung by a lionfish?

Lionfish stings can be incredibly painful and may also lead to dizziness, heartburn, indigestion or a host of other temporary symptoms. It can cause a lethal cardiac or respiratory reaction in people with an allergic sensitivity to the venom and very young children.

Why is the lionfish a problem?

The lionfish is a problem because it has devastating consequences on foreign environments and is very successful at invading them. Their venomous spines and high reproductive rate makes them a significant threat to prey species and a staunch competitor to other predators.

Are Lionfish herbivores, carnivores, or omnivores?

Lionfish are Carnivores, meaning they eat other animals.

What Kingdom do Lionfish belong to?

Lionfish belong to the Kingdom Animalia.

What phylum do Lionfish belong to?

Lionfish belong to the phylum Chordata.

What class do Lionfish belong to?

Lionfish belong to the class Actinopterygii.

What family do Lionfish belong to?

Lionfish belong to the family Scorpaenidae.

What order do Lionfish belong to?

Lionfish belong to the order Scorpaeniformes.

What genus do Lionfish belong to?

Lionfish belong to the genus Pterois.

What type of covering do Lionfish have?

Lionfish are covered in Scales.

What is the main prey for Lionfish?

What are some predators of Lionfish?

Predators of Lionfish include eels, frogfish, and scorpion fish.

What are some distinguishing features of Lionfish?

What is the average clutch size of a Lionfish?

What is an interesting fact about Lionfish?

What is the scientific name for the Lionfish?

The scientific name for the Lionfish is Pterois volitans.

What is the lifespan of a Lionfish?

What is the lifespan of a Lionfish?

What is the optimal pH for a Lionfish?