One of the most common shark species! Click through all of our Grey Reef Shark images in the gallery. 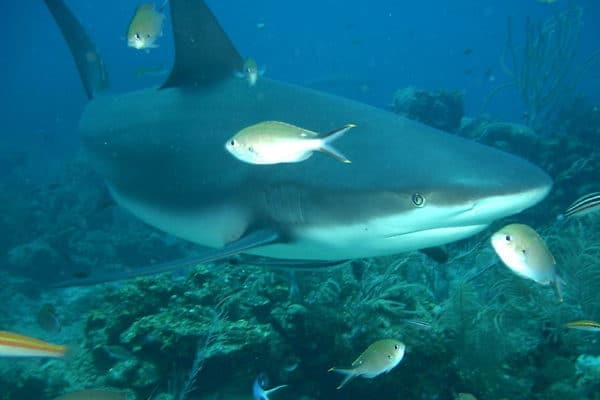 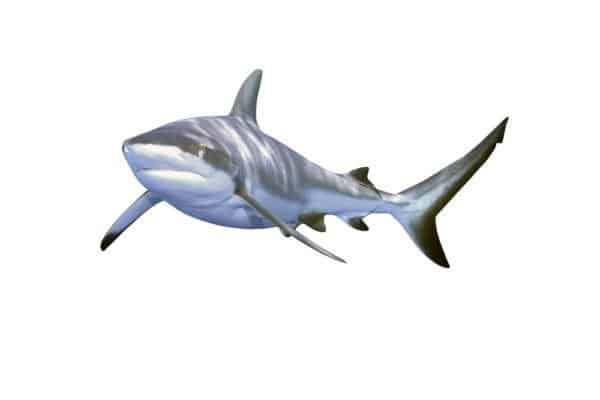 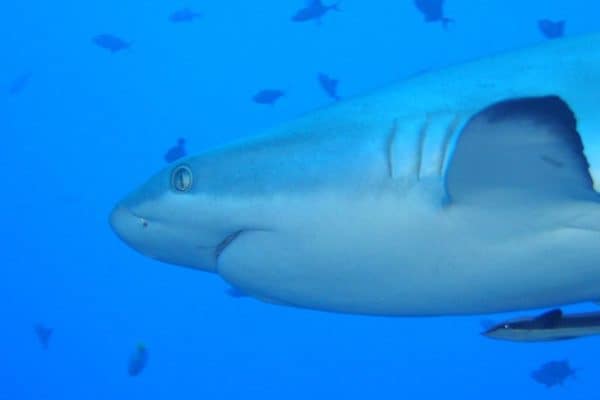 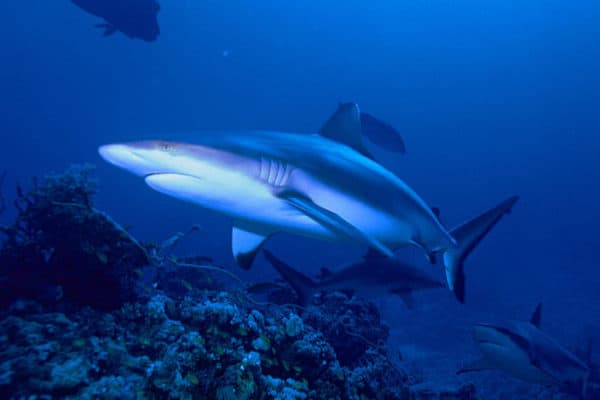 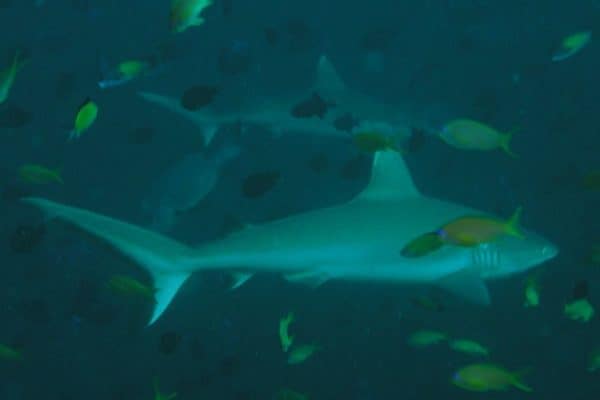 View all of the Grey Reef Shark images!

Grey reef sharks are voracious marine predators that prefer shallow waters and are among the most common sharks found in coral reef habitats throughout the Indo-Pacific region.

They share many characteristics with other reef shark species, including a wide, circular snout positioned directly in front of relatively large eyes. While they have many classic features seen among related shark species, they can be quickly identified by the dark lining along the back side of their tail fin.

Grey reef sharks also go by many other names, including: bronze whalers, whaler sharks and blacktail reef sharks. Their scientific nam is Carcharhinus amblyrhynchos. The genus Carcharhinus is named after two Greek words that mean “sharpen” and “nose.” They are members of the taxonomic family Carcharhinidae, which is part of the class Chondrichthyes along with other types of cartilaginous fish.

This species has an average size compared to other sharks, with a length of around 4 to 5 feet for mature adults. The largest specimens reported to date have reached a length of 8.5 feet and body weight of around 74lbs. Their camouflage adaptations includes a graduating color scale that transitions from darker grey on the upper side of the animal to pale white on the lower side. The have an extended nose that has a rounded tip as well as relatively large eyes.

Like many other shark species, observers can identify the grey reef shark through a quick examination of its fins. This species has a distinct dark margin along the entire backside of the caudal fin on its tail. It also has a dark or bronze grey dorsal fin on its top side with some local populations in the Indian Ocean also displaying a white edge along this fin.

These sharks are purely marine animals that stalk prey in shallow waters throughout the Indo-Pacific region. They prefer tropical and subtropical climates with a wide geographic distribution that encompasses much of Indonesia, northern Australia, various Pacific Islands and the eastern coastline of Africa. Encounters with humans most frequently occur off the coasts of various islands, including Fiji, Tahiti and Papua New Guinea.

As their name suggests, this species prefers to stalk prey along coral reefs that are typically located in shallow waters near coastlines. They often stay within 200 feet of the ocean’s surface, but are sometimes known to plunge to over 3,000 feet. They tend to lurk around rugged terrain, particularly around continental shelves, in relatively clear and calm waters.

While overall population numbers for these sharks is unknown, they are considered near threatened due to habitat loss. Their preference for coral reefs is a significant vulnerability due to the continued destruction of these habitats around the world. Pollution, commercial fishing operations and changing ocean temperatures are all considered threats to coral reef habitats.

Even though they often sit near the top of the food chain in their habitat, grey reef sharks aren’t without some risk of being eaten. In fact, they are a known source of food for larger species like tiger sharks, silvertip shark and the great hammerhead shark. While not a high-priority target, they are also caught by commercial fisherman and harvested for fins and fishmeal.

Prey: The Diet of a Grey Reef Shark

Like most sharks, this species isn’t very picky about what it eats. Grey reef sharks are voracious carnivores and nocturnal predators that prey on almost anything that it can take. Since they tend to inhabit coral reefs, cowfish, butterfly fish and other fish species that prefer this environment are a common target. Various crustaceans, including shrimp and lobsters, as well as squid and octopus are also potential components of a hungry shark’s diet.

Mature female sharks release pheromones into the water to attract males when they are ready to breed. The complex mating dance the males use to compete for attention by females is one of the more distinct and interesting facts about the species. The male often bites the female throughout this process, which can leave notable wounds and leave both individuals vulnerable to predators.

One of biggest threats to the long-term survival of this species is their relatively slow reproductive rate. It takes about one year for females to give birth to litters ranging from 1 to 6 pups. Their lifespan can extend to over 25 years, although they are more likely to succumb to predators, parasites and diseases as they get older.

While they are not a distinct part of local diets throughout their native range, grey reef sharks are frequently caught by commercial fisherman. They are targeted for their fins, which are the key ingredient in shark fin soup. Their meat can also be cooked as a meal or as a general ingredient in ground fishmeal, but is not sought after to the same degree as blacktip sharks and other species of requiem shark.

Even though exact population numbers are unknown, researchers and conservationists are concerned about the longevity of stable populations. These sharks are still thriving in pristine coral reef environments, but are likely to face serious threats as these habitats continue to degrade. High site fidelity is one of the key facts that distinguish this species, so they are unlikely to develop adaptations or explore new habitats as coral reefs are lost.

Where are grey reef sharks found?

These sharks are found throughout the coastal waters of the Pacific and Indian oceans, especially around islands. They have a strong preference for hunting around coral reefs and other types of populated, rugged terrain in shallow waters.

While they do not actively hunt humans, their have been a number of reported incidents of shark aggression against humans. Attacks are much more likely when there is prey nearby, but may also occur when the shark feels threatened. Key facts about aggressive behavior include widening tail arc and a hunched body posture, which should encourage nearby divers to create distance from the animal.

How big do grey reef sharks get?

Baby sharks emerge from their mother at 1.5 to 2 feet long, but mature adults typically grow to a length of around 5 feet. Some sharks can even reach a size of up to 7 or 8 feet with a potential weight of 70 to 80 pounds.

As a near threatened species, there is some concern over current population numbers and long-term viability of the species. Destruction of their coral reef habitat throughout their native range is the leading cause of concern due to their lack of interest or adaptations to alternative habitats. They also face losses from continued poaching and commercial fishing efforts.

What do grey reef sharks eat?

Grey reef sharks are ambitious carnivores with a diverse diet, so almost all animals in their habitat are potential menu items. Local fish, crustaceans, squid and octopus of varying size are all potential prey for these predators.

What Kingdom do Grey Reef Sharks belong to?

What class do Grey Reef Sharks belong to?

What phylum to Grey Reef Sharks belong to?

What family do Grey Reef Sharks belong to?

What order do Grey Reef Sharks belong to?

What type of covering do Grey Reef Sharks have?

What genus do Grey Reef Sharks belong to?

What are some predators of Grey Reef Sharks?

Predators of Grey Reef Sharks include humans and larger sharks.

How many babies do Grey Reef Sharks have?

The average number of babies a Grey Reef Shark has is 4.

What is an interesting fact about Grey Reef Sharks?

Grey Reef Sharks are one of the most common shark species!

What is the scientific name for the Grey Reef Shark?

The scientific name for the Grey Reef Shark is Carcharhinus Amblyrhynchos.

What is the lifespan of a Grey Reef Shark?

What is the lifespan of a Grey Reef Shark?

How fast is a Grey Reef Shark?

A Grey Reef Shark can travel at speeds of up to 25 miles per hour.