They have a high-pitched alarm call that sounds like a barking dog. 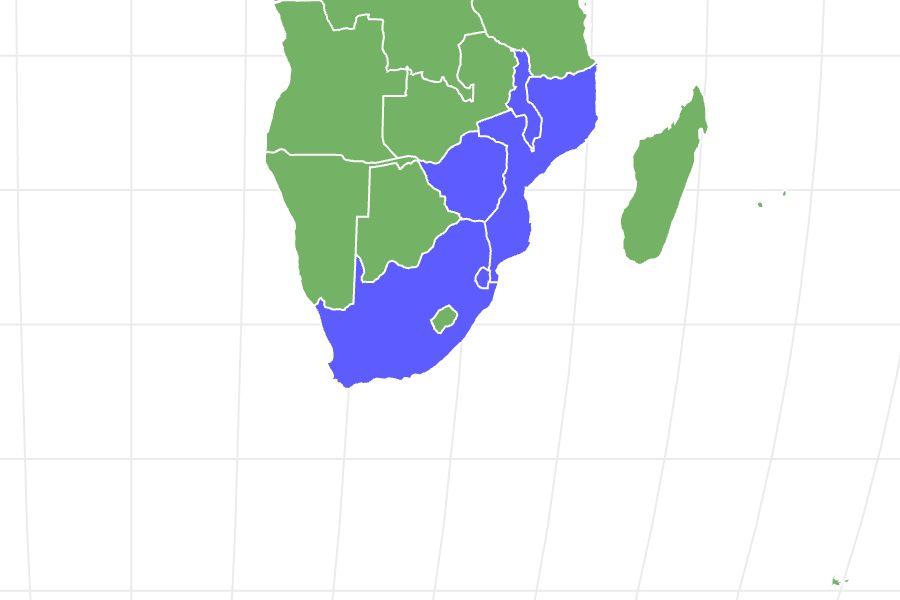 View all of our Nyala pictures in the gallery.

View all of the Nyala images!

“The Nyala is one of the oldest antelopes in Africa.”

Scientists believe that this shy member of the Bovidae family has been around for close to 6 million years, which makes it only second to the lesser kudu when it comes to species longevity. Because of this, some believe it’s high time to put the nyala in its own genus, but for now, it remains a member of Tragelaphus. For even more information about this stunning antelope, read on:

Here are some amazing facts about T. angasii:

The scientific name of this antelope is Tragelaphus angasii. Tragelaphus comes from the Greek words trágos, which means “billy goat” and élaphos, which means “deer.” Some scientists also place the nyala in its own genus, Nyala. Angasii comes from George Fife Angas, who was the father of the naturalist who first described the animal in 1849. There are no subspecies, and the animal called the mountain nyala is only distantly related. By the way, the pronunciation of the scientific name is Trah gah LAY fus An GAS ee eye.

A female nyala looks very much like a deer. She does not have horns and stands a little less than 3 feet tall at the shoulder. She has a reddish-brown coat, at least 10 white, vertical stripes along her sides, and a crest of dark hair that runs all the way down her back. The males begin life with the same colors as their mothers. Biologists believe this saves them from aggression from older bulls. As they grow their coats turn a dark, almost bluish-gray, and their stripes start to fade. Bulls also have spiraling horns that can grow as long as 2.6 feet and are tipped with yellow. The bull’s lower legs are also yellow. The ears of both sexes are large and call to mind the mule deer.

Along with the hair down the spine that they share with the females, male nyalas also have a fringe that begins in the middle of their chest and moves down their belly. Both males and females have white spots on their faces, throats, knees, and thighs, including a white chevron-shaped patch between the eyes. The tail is bushy, medium-long, and has a white underside.

What is the Difference Between a Kudu and a Nyala?

Identification of T. angasii and identification of the kudu can be a little tricky, for both antelopes live in southern Africa and both are members, for the time being, of the Tragelaphus genus. The greater kudu is Tragelaphus strepsiceros and the lesser kudu is Tragelaphus imberbis. Both nyalas and kudus have vertical stripes down their sides, white Vs between their eyes and the males of both species have spiraling horns. One characteristic that helps in the identification of the kudu (Pronunciation: KOO doo) is that it is a much bigger antelope than the nyala. The greater kudu can be from 6.5 to 8.25 feet long, stand 5 feet tall at the shoulder and weigh between 260 and 690 pounds. Indeed, the greater kudu is one of the world’s tallest antelopes. Even the lesser kudu is taller than the nyala at 4 feet tall. The horns of the kudu are even larger in size than those of T. angasii or any other antelope and their spiraling is even more spectacular. The kudu’s horns can be 5.5 feet long.

The color of the adult kudu male’s hide is also different than that of the T. angasii bull. The colors range from chestnut to blue-gray, but its stripes do not fade like the stripes of the nyala bull. Kudu males also have beards, which isn’t seen in T. angasii. Kudus are also herbivores, but they live in more locations and habitats than nyalas. They’re not only found in southern Africa but eastern Africa, and they’ll live wherever there’s good cover. They’re also seasonal breeders in their southern range where nyalas can breed all year.

Nyalas, especially females, live in loose groups that can range from two to 30 antelope, but old males are solitary. They are wary animals and graze and browse during the evening and at nighttime. During the day they hide in the bush to avoid the heat as well as predators. When they sense danger they give out a peculiar barking call, and they can also understand the alarm calls of other types of antelopes as well as baboons. They’re often seen around baboons because the primates toss down the leaves and fruit that the nyala like to eat.

They are found in savannas that give them lots of cover and are near fresh water and lush grass. These locations can be found in South Africa, Zimbabwe, Mozambique, and Swaziland. They are also found in game reserves such as Kruger National Park. If the antelopes have territories, they overlap and are not well defended.

Like most antelopes, the nyala are herbivores. Their diet is made up of a variety of plants, and they consume flowers, fruit, leaves, and twigs. When the grass is lush during the rainy season they eat grass, and though they can go a long time without water, they prefer to live near a freshwater source.

Despite its magnificent looks, T. angasii isn’t a very big antelope. Indeed, lions tend to disdain it, and it is taken by prides of bachelors who don’t have females to hunt for them and find the nyala easy pickings. The antelope is just right for the leopard, for it is small enough to be cached in a tree. Other predators are wild dogs and hyenas. Baboons and birds of prey snatch babies, and of course, humans hunt the antelope for its meat and its beautiful horns.

Other threats to the antelope are poaching and habitat loss due to agriculture. They are also vulnerable to parasites such as nematodes, trematodes, lice, and disease-spreading ticks. They can also suffer from heart disease.

T. angasii can breed all year, but breeding usually peaks in the spring. The female’s estrus cycle is a bit odd, for estrus lasts for 19 days and she’s only receptive for about six hours. Since she’ll be courted by a male for only two days, he needs to court her during the few hours that she’s ready. Bulls sometimes fight over females. Given the size and power of their corkscrew-shaped horns, once in a while, they fight to the death. Usually, the smaller of the two will give up and walk away.

After mating, the cow is pregnant for about seven months and gives birth to a calf. The calf weighs about 11 pounds and is birthed in a hidden place that protects it from predators. It will stay there for about 18 days, and its mother comes back now and then to nurse it. Calves are weaned when they’re about seven months old, and male calves stay with their mother until she’s ready to have another baby. At that time the bull drives him away, but females tend to stay with their mothers even after they’ve had their own calves.

There are an estimated 30,000 wild T. angasii in the world, and most of them live in protected areas. Their conservation status is least concern.

View all 38 animals that start with N

Are Nyalas carnivores, herbivores, or omnivores?

What is a nyala?

T. angasii is an antelope found in southeastern Africa. It is a mid-sized antelope and is notable because the males and females look very different from each other. The males have beautiful, spiral horns while the females are hornless.

How do you say nyala?

The pronunciation is Nee AH luh.

What does the name nyala mean?

The meaning of “Nyala” is the name the Tsongas of southern Africa gives to this particular antelope.

What is a nyala in English?

The meaning of nyala in English has the same meaning in Tsonga.

What is a female nyala called?

Usually, a female antelope is called a doe and the male a buck. In the case of the nyala, the male is a bull, so the female is probably a cow.